Sometimes bones disappear.
Other times bones become fused to one another. The extant caecilian Dermophis (Fig. 1) might demonstrate one or the other or both. Coloring the bones helps to interpret and explain their presence despite the absence of sutures due to fusion or loss.

Figure 1. Dermophis, the extant Mexican caecilian, with bones, even if fused to one another, identified. The quadratojugal and squamosal are absent. Black and white image from Digimorph.org. Coloring the bones makes them so much easier to read and understand.

The cheek bones are traditionally labeled squamosals, but that may not be the whole story here. Different from nearly all other basal tetrapods (including other amphibians), caecilians shift the jaw joint forward, creating a large retroarticular process of the posterior mandible.

Dermophis lives in humid to dry soils beneath leaf-litter, logs, banana or coffee leaves and hulls or similar ground cover. It is viviparous.

Ontogeny should tell
The true identity of skull bones should be able to be determined by watching their growth from small disconnected bone buds in the embryo. Unfortunately, the references I’ve seen don’t make that growth clear in all cases. So, I’m stuck, for the present, with comparative anatomy within a phylogenetic framework that nests caecilians with Acherontiscus (Fig. 4) and kin, which have large and separate cheek bones.

FIgure 2. Eocaecilia has small limbs and a substantial tail. The tabular may be absent here unless it, too, is fused to the postorbital/squamosal. The tabular is tiny in Dermophis and probably useless.

Limbs and limb girdles
are absent in all extant caecilians and the majority of species also lack a tail. They have a terminal cloaca, like an earthworm. Limbs are vestigial in Eocaecilia (Fig. 2), and a substantial tail is present. 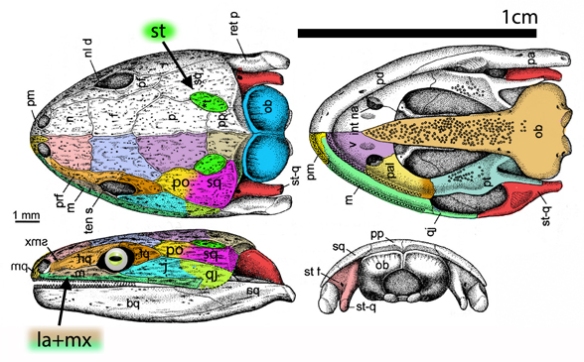 Figure 3. Eocaecilia skull with original and new bone identifications based on comparisons to sister taxa listed here. Like Brachydectes, the jaw joint has moved forward, beneath the jugal now fused to the quadratojugal creating a long retroarticular process, otherwise rare in amphibians. Also rare is the fusion of the squamosal with the postorbital. Note the reduced supratomporal. here and in Dermophis.

The tentacle
Extant caecilians have a unique chemosensory organ located on the head called the tentacle. The tentacle exits the skull through the tentacular foramen (looks like an antorbital fenestra) located between the nares and orbit. Eocaecilia lacks this foramen (Fig. 3).

Figure 4. Acherotisicus has large cheek bones (squamosal, quadratojugal) that appear to fuse in Eocaecilia and Dermophis.

Image above from Digimorph. org and used with permission.

5 thoughts on “Dermophis, an extant caecilian gets the DGS treatment”