A new genus and species of little pterosaur
from the Early Cretaceous of Morocco, Leptostomia begaaensis (Smith et al. 2020; Figs. 1–3), is based on two, little 3D pieces of rostrum (FSAC-KK 5075) and mandible (FSAC-KK 5076) originally considered to belong to a new kind of azhdarchoid (an invalid polyphyletic clade in the large pterosaur tree; LPT, 251 taxa), that traditionally, but mistakenly includes unrelated tapejarids and azhdarchids. As usual, simply adding traditionally or specifically omitted taxa clarifies interrelationships.

Figure 1. At about twice life size, these are jaw portions from Leptostomia in several views.

The affinities of the jaw segments remain ‘unclear’
according to the authors. Once again this was due to taxon exclusion.

Unfortunately
Smith et al. omitted the tall, slender ctenochasmatid, Gegepterus (Fig. 3,4) from their comparables list. Gegepterus has a similar rostrum and mandible. Both are similar in size and (Fig. 4) both are from Early Cretaceous strata, one from Morocco, the other from China. 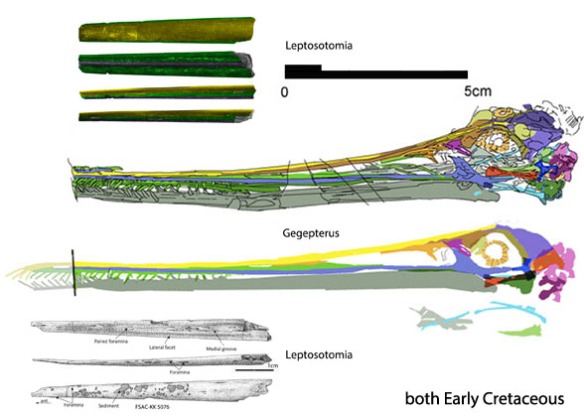 Most pterosaurs,
including azhdarchids and tapejarids, have a taller than wide rostrum along with a narrow premaxilla ascending process that extends to the dorsal orbit.

Figure 4. Similar to azhdarchids, except for size, Gegepterus was a tall, slender ctenochasmatid with long jaws, neck and legs for an overall small pterosaur. Here it is shown 3/5 original size.

By contrast,
the Leptostomia rostrum has a wider rostrum and a wider premaxilla overlapping it. Worth remembering: both the rostrum and mandible fragments are less than 1cm wide on this small specimen and genus.

Most ctenochasmatids
have long slender teeth arising from the jaw rims. No such teeth are preserved with or were collected with Leptostomia, A close view (Fig. 5) shows a line of small ovals that could be slender tooth alveoli. Or teeth may indeed be absent in this taxon.

Wiki authors describing Gegepterus in Wikipedia note:
“This is the first uncontroversial report of the Ctenochasmatidae from the Yixian Formation, as the fossils of other assumed ctenochasmatids have not preserved the dentition.”

Smith et al. note,
“Leptostomia differs from other edentulous pterosaurs in possessing a remarkably low rostral lateral angle, endowing it with a very long and slender beak. Its lateral angle is also very low when compared with toothed pterosaurs with only some ctenochamatids having a similarly low lateral angle.”

Smith et al. propose a poorly informed guess,
“The new pterosaur adds to the remarkable diversity of pterosaurs known from the mid-Cretaceous, and suggests that pterosaur diversity remained under sampled.” No it doesn’t. Leptostomia looks like an omitted taxon, Gegepterus.

In the LPT there are few to no morphological gaps largely because it employs a much larger taxon list than any published by PhD workers and their students who refuse to include small taxa, more than one specimen assigned to a genus and valid pterosaur outgroups in their analyses. Same for the LRT.

Smith et al. state,
“The proposed probe-feeding strategy suggested by the rostrum morphology of Leptostomia has not previously been documented for the Pterosauria.” This is false. Just google, “pterosaur + probe” and a long list will appear. And there’s always this image (Fig. 6) of the man-sized Quetzalcoatlus probing, which has been online for awhile, following ‘suggestions’ from Langston 1981.