Bigger is better
especially when it comes to pterosaurs in museum exhibits. To wit: The Field Museum (Chicago, IL, USA) is installing a flying Quetzalcoatlus (Fig. 3) and a standing Quetzalcoatlus (largely imagined and restored, based on an almost complete wing bone, Fig. 1).

The artist/professors in Southern England
have one as well (Fig. 1). And full scale Q. northropi sculptures can be found worldwide! (See links and images at the end of this post.)

Figure 1. Field Museum Quetzalcoatlus (tan) vs. English Quetzalcoatlus (gray) vs. a tracing of the real Q. sp. and Q. northropi scant remains. Yes, the skull on the Field Musuem model is too long, evidently following the invalid archosaur hypothesis of origin. Pterosaurs, like other tritosaurs, do not change their proportions during growth as fossils demonstrate.

These models arrive on the heels
of a recent post on flightless giant pterosaurs. The Field Museum model (Fig. 1) appears to have a more precisely modeled skull, though about 50% too long (but really, without a skull, who knows?). Perhaps the skull was elongated (based on the smaller ?species) based on the invalid archosaur hypothesis of pterosaur origins. We know from the evidence of fossils that hatchlings and juvenile pterosaurs had adult proportions, not longer skulls.

Both models suffer
from putting too much weight on the tiny free fingers. The feet should be beneath the shoulder joint, as in birds, to take the weight off the tiny hyperextended fingers, acting more like ski poles, not providing thrust, only some sort of support.

Figure 2. Here’s how the wing membrane in pterosaurs virtually disappeared when folded. This is a tiny pre-azhdarchid, CM 11426.

Over at the Carnegie Museum (Pittsburgh, PA, USA)
they have a tiny pre-azhdarchid, CM 11426 (Fig. 2), with real wing membranes, as described above, matching those of other pterosaur soft tissues.

Figure 3. Field museum flying Quetzalcoatlus model has the traditional but invalid deep chord wing that attaches to the tibia and makes this sort of pterosaur untenably awkward.

Figure 4. Quetzalcoatlus recreated as a digital model by Henderson 2010 compared to a bone reconstruction. This is a possible slightly deeper wing chord. Compare this one to figure 5, which is more typical. And look at those hind limbs, like those of Sharovipteryx, forming a horizontal stabilizer, just like a typical airplane. And it matches the evidence (Fig. 2).

Not sure why pterosaur paleontologists
keep insisting that evidence (Fig. 2) can and should be ignored. It’s disheartening to see this and leaves them open to criticism.

Figure 5. Quetzalcoatlus running like a lizard prior to takeoff. Click to animate. Giant azhdarchids gave up flying by reducing the lenth of their wings, following the patterns of other flightless pterosaurs. There is no awkwardness with this narrow chord wing design, which follows fossils like CM 11426 (Fig. 2).

If some of these seem to defy the ability to fly based on
a too far aft center of lift and a too far forward center of balance, or too small of a wing for such a large mass, no worries mate! If the imagination can soar, then so can these giants (NOT!) In the above YouTube video, the invalid, but traditional batwing shape of the brachiopatagium is best seen in the pterosaur’s shadow. 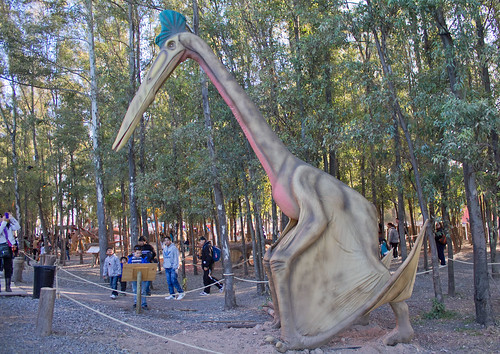 IF the wing membranes seem encumbering
awkward, liable to trip up the pterosaur or catch on some low lying shrub, no worried, mate! As these pterosaurs once wandered, let your imagination wander. There’s no need to precisely follow the evidence (Fig. 2) that shows the wing membranes essentially disappearing while flexed/folded.

It’s going to be difficult to raise the wings for flight
given some of these awkward quadrupedal poses. Much better to have the center of balance over the toes at all static times (see below), shifting the balance forward while running at full speed (Fig. 5), like birds.

Why is this Houston Museum Quetzalcoatlus posed like this? Very strange.

Quetzalcoatlus neck poses from David Peters Studio. Dipping, watching and displaying. Yes, the third finger is wrong here. It should be pointing posteriorly.

With what we know about pterosaurs
this should be a golden age of restoration. Instead, these models will someday be seen for what they are… near misses. They replace elegance with awkwardness, facts with fancy, and precision with tradition.

2 thoughts on “Battle of the giant Quetzalcoatlus sculptures”