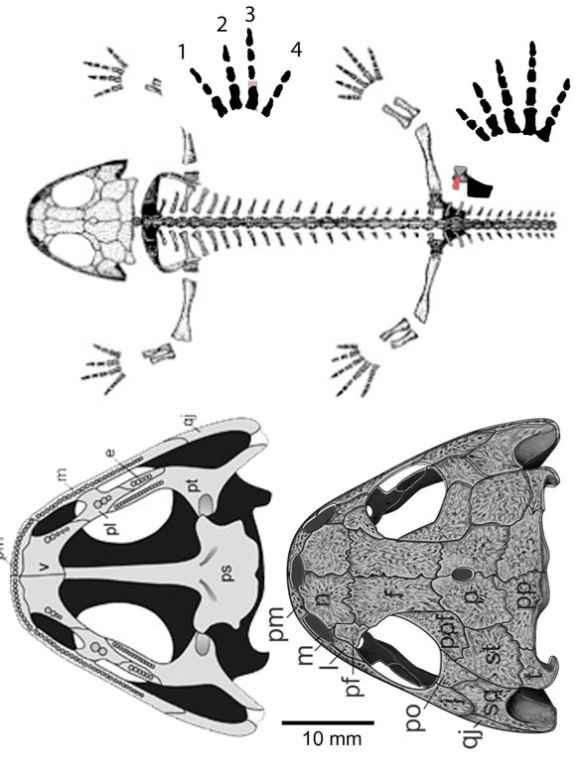 Figure 1. Apateon overall and the skull in palatal and dorsal views. This taxon nests between Doleserpeton and Gerobatrachus in the LRT.

Apateon pedestris (von Meyer 1844, Early Permian, 295mya; 12 cm in length) was long considered a temnospondyl in the family Branchiosauridae. Here Apateon nests between Doleserpeton and Gerobatrachus in the lepospondyl lineage of frogs, like Rana and salamanders like Andrias.

Resembling a small salamander with a long, laterally flattened tail, Apateon had a shorter rostrum and large orbits than Doleserpeton. The pineal opening was larger. The ilium was more erect. The pubis was missing. The ectopterygoid did not contact the maxilla and the palatine did so only with a narrow process. At present, no other taxa in the LRT (978 taxa) do this.

Small scales covered the body. Three pairs of external gills were present for underwater respiration. Many species are known, as well as a good ontogenetic series.

Anderson 2008 reported,
“Branchiosaurs [including Apateon] are closely related to amphibamids, if not included in the latter group, and have been suggested to be closely related to salamanders because of shared similarities in the sequence of cranial ossification.”

“New transitional fossils like the stem batrachian Gerobatrachus have filled in the morphological gap between amphibamid temnospondyls and the earliest frogs and salamanders, and this portion of the lissamphibian origins question appears very well supported.”

The LRT recovers
Amphibamus much closer to the base of the lepospondyls, about 5 nodes distant from Apateon. Of course, neither are closely associated with temnospondyls in the LRT, despite the open palate, otic notch and other convergent traits.

Neotony
The apparent lack of gill-less adults among all of the apparent larval gilled specimens of Apateon was a cause of consternation for awhile. The new largest specimen (Frobisch and Schoch 2009) appears to indicate an adult specimen. It had partially interdigitating and tight sutures of the skull roof, a high degree of ossification and differentiation of the postcranium as compared to smaller larval specimens. Uncinate processes indicate that this specimen represents an adult. However, it lacks ossifications of the exoccipitals and quadrates, intercentra, and the coracoid as seen in metamorphosed specimens. Frobisch and Schoch conclude, “The anatomical evidence at hand clearly indicates that both life history strategies, metamorphosis and neoteny, were established in Paleozoic branchiosaurids.”

2 thoughts on “Apateon and the origin of salamanders + frogs”