A recent paper
by Carrano and Choiniere 2016 excavated and described the metacarpus and forearm plus a few partial phalanges of the Ceratosaurus holotype  (USNM 4735). 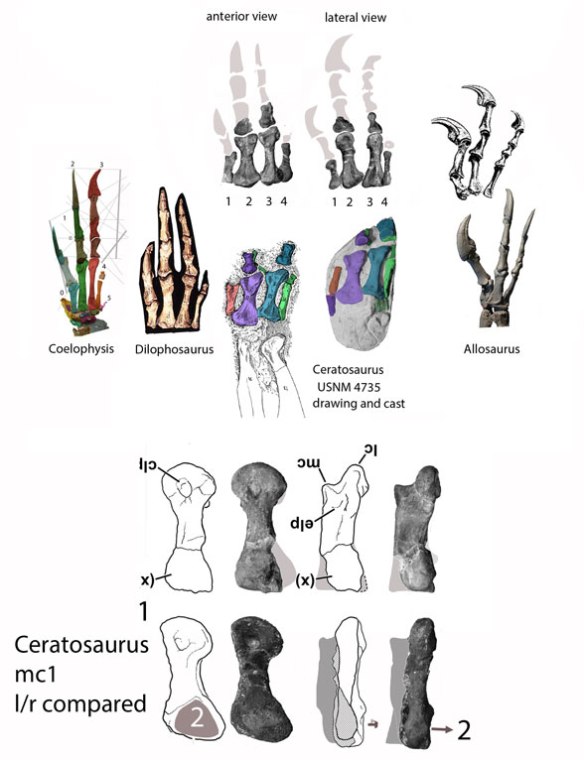 FIguire 1. the partial manus of Ceratosaurus compared to that of Coelophysis, Dilophosaurus and Allosaurus. Restored areas are in gray.

Carrano and Choiniere reported,
“it is more parsimonious to identify the manus of Limusaurus as an autapomorphic condition instead of as primitive for Ceratosauria (Xu et al., 2009). This is particularly evidenced by the primitive metacarpal I in Ceratosaurus, nearly identical in morphology to that seen in other basal neotheropods and quite unlike that in Limusaurus.”

You may recall
that the putative digit 1 of Limusaurus is actually the reappearance of digit 0, a basal tetrapod digit medial to digit 1. We also looked at a possible digit 0 on a specimen of Coelophysis.

Although Ceratosaurus currently nests as a sister to Allosaurus
in the large reptile tree, the manus is more primitive (more like that of Dilophosaurus) with a smaller digit 1 and the retention of a vestigial digit and mc4. Limusaurus nests with the oviraptorid, Khaan.

Carrano and Choiniere correctly conclude:
“Therefore, extreme manus reduction occurred twice in ceratosaurs—once in Limusaurus (and possibly in closely related taxa) and once in derived abelisaurids—and differently in each.”