Ran across this image of a Coelophysis manus
(Figs. 1, 2) in the SuppData to Xu et al. 2009 (the paper that introduces us to Limusaurus. Fig. 4), which we looked at earlier here. The fossil appears to be one of the best preserved examples of a Coelophysis manus. Every bone is laid out without disturbance.

Xu et al. (2009)
introduced the concept of a “phase shift” in theropod digits to account  for the medial bud in Limusaurus, which they counted as digit 1 and the similar bud in chicken embryos. In their hypothesis the other digits changed their appearance to resemble the digit that was medial to each one. One through Three became Two through Four.

Figure 1. Coelophysis manus with digit 0, as in Limusaurus, medial to digit 1. This image also includes mt5 with phalanges, identified by Colbert as distal carpal 4. IF that is not digit zero, then it must be a slipped carpal element, but I think I’ve identified them all here. Note the PILs align even withe vestigial digits.

Unfortunately
Xu et al. 2009 did not clarify, but only muddied avian digital homologies. As we learned earlier, that medial digit is actually a ‘throwback” to basal tetrapods that once had an extra digit medially and is lost on almost all other taxa after hatching. Embryos retained it for a short time.

In this revised hypothesis
the appearance of the bud does not represent a “phase shift” of phalanges, but rather the appearance of a very old medial digit, digit “0”. The other digits retain their original pentadactyl numbers 1-5.

That brings us to
a specimen of Coelophysis (Figs. 1,2) that appears to preserve the manus without disturbance and with that rare medial bud. Perhaps this is another digit “0” — and this time with vestigial phalanges — if interpreted correctly.

Figure 2. Carpus of Coelophysis GIF animation. I’m a little confused about the medial bones here. If they don’t represent digit ‘0’, then perhaps some carpals have shifted medially here. The 1+2 carpal could be the medial centrale (Ce1) and the Ce1 could be the 1+2 carpal. Also, this specimen appears to have more carpals than Colbert 1989 illustrated (below).

Apparently
Digit 0 on theropods appears to be retained as a fused medial element in some modern birds (Fig. 3). It’s that little bump medial to metacarpal 1.

Figure 3. A selection of pre-bird and bird hands/wings including Haplocheirus, Limusaurus, Velociraptor, Archaeopteryx, Anser, Passer and two versions of the Hoatzin , Opisthocomus, adult and juvenile. Click to enlarge. Not to scale. Note the medial digit of the outlier, Limusaurus, which is a product of neotony, retained from embryonic tissue recapitulating the seven-finger manus of basal tetrapods (figure 3). Note the return of digit 0 fused to the anterior rim of Anser, Passer and the adult Opisthocomus.

Vestigial digits
I presume, are lost during excavation every so often. Are they worth scoring in phylogenetic analysis? I score them. 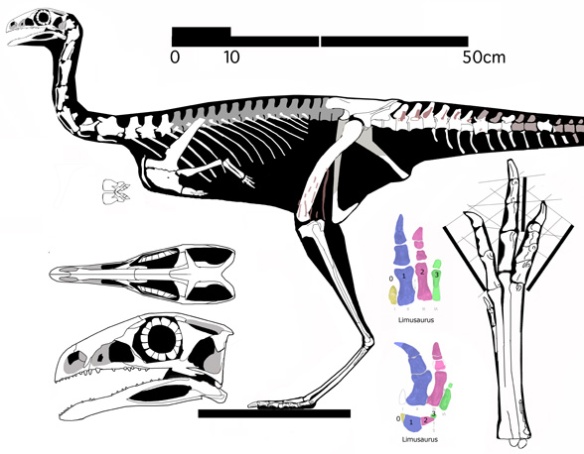