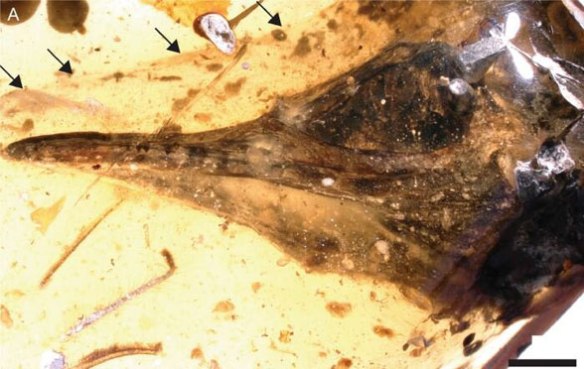 I never thought the tiny Middle Triassic pterosaur ancestor, Cosesaurus
(Fig. 2, 4) would ever be joined by an Early Cretaceous sister taxon that was even smaller. Yesterday the impossible happened when the editors of Nature published a description of tiny Oculudentavis (Xing et al. 2020; Figs. 1, 2; Early Cretaceous, 99 mya; 1.4cm skull), which the authors mistakenly considered a basal bird with teeth and the smallest Mesozoic dinosaur. 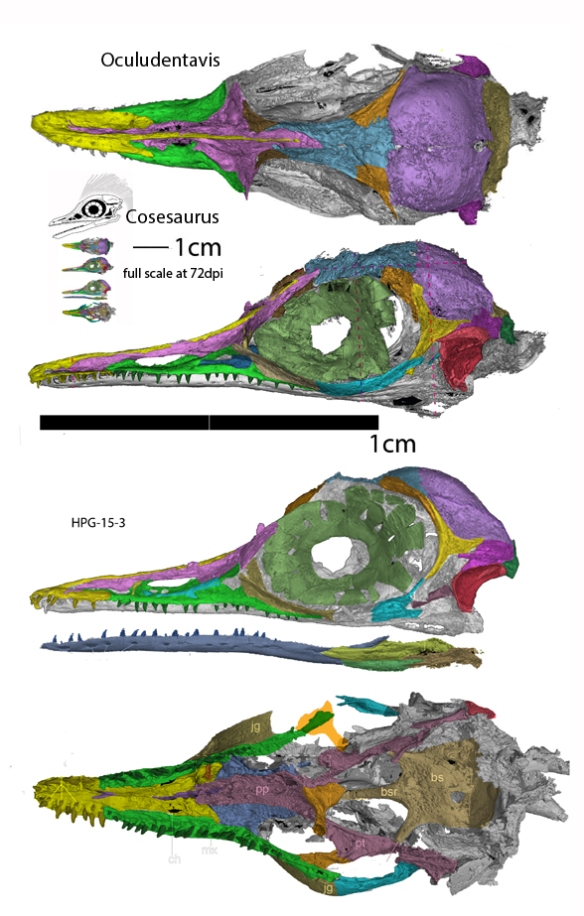 Figure 2. CT scans of Oculudentavis from Xing et al. 2020 and colored here, plus a comparison of Cosesaurus to scale.

Taxon exclusion
Unfortunately the authors did not test Oculudentavis with Cosesaurus, a fenestrasaur, tritosaur lepidosaur… a taxon far from dinosaurs. When Oculudentavis was added to the large reptile tree (LRT) as the 1656th taxon, the tree length was 20291.

As a test
I forced Oculudentavis over to the London specimen of Archaeopteryx, which Xing et al. recovered as a sister, and the LRT bumped up to 20324, a mere 33 steps more despite the huge phylogenetic distance.

I’ve said it before,
convergence is rampant in the tetrapod family tree.

To that point, it should be remembered,
the original describers of Cosesaurus (Ellenberger and de Villalta 1974) mistakenly considered it a Middle Triassic stem bird.

In contrast,
Peters (2000) recovered Cosesaurus and kin with pterosaurs using four previously published phylogenetic analyses. Later, with more taxa, Peters (2007) recovered pterosaurs and kin with the lepidosaur Huehuecuetzpalli (Fig. 3). In addition, ResearchGate.net holds an unpublished manuscript and figures redescribing Cosesaurus and kin much more accurately. The pterosaur referees did not want that manuscript published, having ignored the earlier ones for so long. 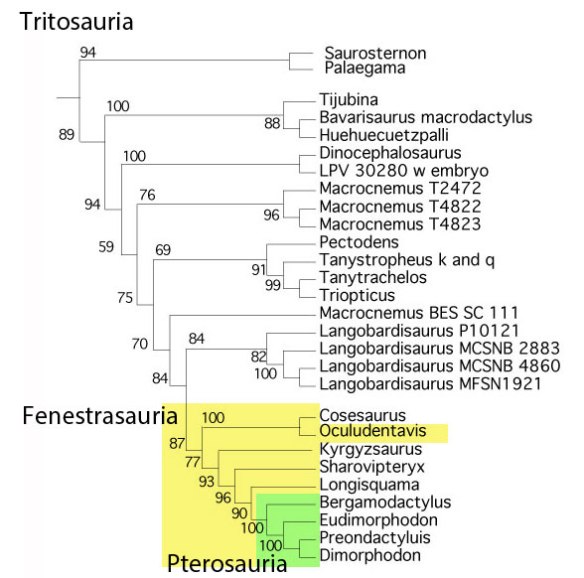 Ironically
Xing et al. noted in tiny Oculudentavis lepidosaur-like sclerotic (eyeball) bones and acrodont to pleurodont teeth extending below the orbit, as in modern lizards. Even with these clues, they did not add lepidosaurs to their analysis. They assumed from the start they had a tiny dinosaur-bird (with lepidosaur traits).

Figure 4. Cosesaurus running and flapping. If you want to know what the Oculudentaivis post-crania looks like, this is the closest known sister taxon, slightly smaller than full scale.

Distinct from Cosesaurus,
(Fig. 2) the palate of Oculudentavis is solid below the rostrum. The antorbital fenestra is reduced. Damage to the skull displaced one ectopterygoid to the mid palate and broke the jugal. The post-crania remains unknown, but Cosesaurus (Fig. 4) is the most similar taxon.

From the Xing et al. 2020 abstract:
“Here we describe an exceptionally well-preserved and diminutive bird-like skull that documents a new species, which we name Oculudentavis khaungraae gen. et sp. nov. The find appears to represent the smallest known dinosaur of the Mesozoic era, rivalling the bee hummingbird (Mellisuga helenae)—the smallest living bird—in size. The O. khaungraae specimen preserves features that hint at miniaturization constraints, including a unique pattern of cranial fusion and an autapomorphic ocular morphology9 that resembles the eyes of lizards. The conically arranged scleral ossicles define a small pupil, indicative of diurnal activity. The size and morphology of this species suggest a previously unknown bauplan, and a previously undetected ecology.”

The authors saw lepidosaur traits not found in basal birds/tiny dinosaurs.
Rather than seeking and testing more parsimonious sister taxa elsewhere, the authors chose to follow their initial bias and described their find as an odd sort of tiny bird.

In a similar fashion
just a few days ago Hone et al. 2020 did much the same as they mistakenly described a large pteryodactylid, Luchibang, as a small istiodactylid, following their initial bias.

The LRT provides a wide gamut of 1656 taxa
to test your next new taxon. Don’t make the same mistake as the above authors by assuming your odd little something is something it isn’t.

Thanks to Dr. O’Connor for sending a PDF of the Nature paper.

6 thoughts on “Oculudentavis: not a tiny bird or dinosaur. It’s a tiny cosesaur lepidosaur.”