According to Wikipedia,h
“The class Osteostraci (“bony shields”) is an extinct taxon of bony-armored jawless fish, termed “ostracoderms“, that lived in what is now North America, Europe and Russia from the Middle Silurian to Late Devonian.

“Anatomically speaking, the osteostracans, especially the Devonian species, were among the most advanced of all known agnathans. This is due to the development of paired fins, and their complicated cranial anatomy. The osteostracans were more similar to lampreys than to jawed vertebrates in possessing two pairs of semicircular canals in the inner ear, as opposed to the three pairs found in the inner ears of jawed vertebrates.”

Lampreys have no fins, nor do they have disc-shaped skulls and armor, like sturgeons do. 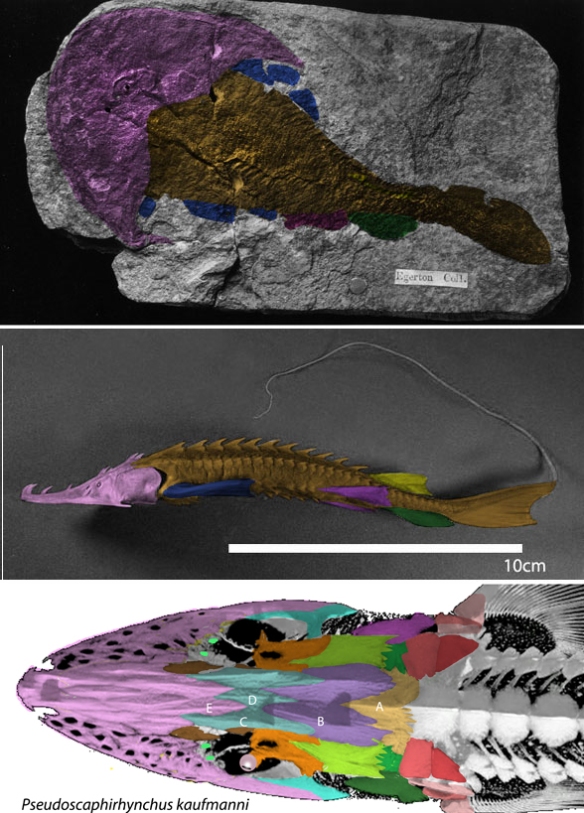 Figure 1. The osteostracan Cephalaspis (above) compared to the sturgeon Pseudoscaphorhynchus (below). The similarities of these armored morphologies have been overlooked previously. In both cases the jawless or tubular mouth is below the skull, the former towards the front, the latter below the eyes.

The similarities of these armored morphologies
have been overlooked previously. In both cases the jawless or tubular mouth is below the disc-like skull. In sturgeons the lacrimal forms the top of the tube.

A premaxilla and maxilla arrive
with the genesis of teeth.

Here’s what Wikipedia has to say,
“These jawless vertebrates are the sister-group of gnathostomes. Several synapomorphies support this hypothesis, such as the presence of: sclerotic ossicles, paired pectoral fins, a dermal skeleton with three layers (a basal layer of isopedin, a middle layer of spongy bone, and a superficial layer of dentin), and perichondral bone.

“Most osteostracans had a massive cephalothorac shield, but all Middle and Late Devonian species appear to have had a reduced, thinner, and often micromeric dermal skeleton. This reduction may have occurred at least three times independently because the pattern of reduction is different in each taxon.”

Sturgeons retained that osteostracan cephalic shield
for the last 400 million years. And a bit of the armor,  too. The primitive nature of sturgeons has been understood since the beginning of paleoichthyology, but just how primitive has eluded workers until now. If there is an earlier citation that links sturgeons to osteostracans, let me know, so I can give proper credit.

Based on the node
on which the osteostracan Hemicyclaspis, all later taxa, including Tetrapoda and Homo, can also be considered part of the clade Osteostraci.

Pseudoscaphirhychus kaufmanni (Nikolskii 1900) is the extant amu darya sturgeon. Distinct from traditional cladograms, the LRT nests this sturgeon between the osteostracan, Hemicyclaspis and the last common ancestor of sharks and bony fish, Chondrosteus. All have weak ventral jaws, no teeth and a shark-like heterocercal tail.

The lacrimal and mandible support a bottom-feeding extendable tube disconnected from the quadrate. Breathing is hampered whenever the mouth is in the mud, so water enters the top of the operculum, then exits laterally.