“One thing that has consistently baffled researchers
is how primates arrived in South America.”

From BBC. com: “In the case of the monkey puzzle the reasoning was simple. In the distant past there was no Atlantic Ocean – Africa and South America formed part of a much larger landmass called Gondwana. So the primitive precursor species of Old World and New World monkeys could literally have walked – or swung – to what is now South America’s east coast.

“But molecular clock estimates now date the last common ancestor for New and Old World monkeys to a time about 100 million years after the continents had split apart. So that idea has gone out the window.”

“South America and Africa have been separated since the early Late Cretaceous, so vicariance of primates does not appear reasonable as an explanation for their appearance in the Eocene on two continents separated by the Atlantic. Numerous studies have focused on the possibility of primates crossing the Atlantic to reach South America from Africa, with rafting across the Atlantic usually considered a feasible way for how primates arrived in South America, presuming they originated in Africa. It has also been proposed that perhaps more than one rafting event carried more than one primate taxon successfully across the Atlantic in the Palaeogene, suggesting a possible early African diversification before arrival in South America. This might favour the arrival of different higher clades in South America, thus allowing the diversification of more than one lineage. A similar means of arrival in South America has often been proposed for the hystricognath rodents. The dispersal of amphisbaenian and gekkotan lizards and the Opisthocomiformes, a Neotropical group of birds (hoatzins) with weak flight capabilities and alleged African origin.”

Figure 1. At the start of the Eocene this is the distance monkeys would have to raft to get to South America. This hypothesis is invalidated by today’s blogpost.

The BBC website continues…
“Scientists considered alternative theories. Perhaps the monkeys crossed from places other than Africa – via North America, for example, or even through Antarctica. But there are no fossils to support these ideas, despite the primate fossil record being one of the most complete of all major mammalian groups. These ideas do not really stand up to scrutiny.” Actually several fossils support these ideas. See below.

Schrago and Russo 2003 report using gene data:
“Our results show consistently that Platyrrhines split from Catarrhines at around 35mya. Our estimate for the origin of New World monkeys is in agreement with the hypothesis of a transatlantic journey from Africa to South America, as suggested by the fossil record.” 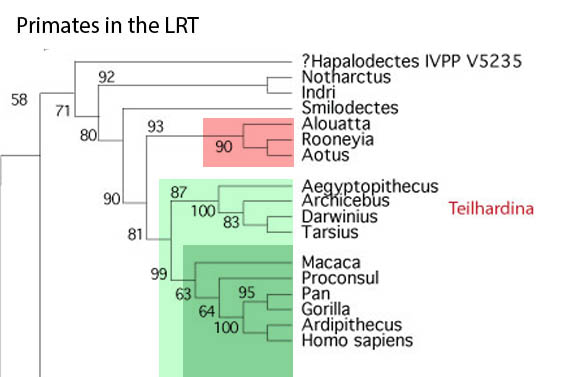 Figure 2. Subset of the LRT focusing on Primates. Here New World monkeys, like Aotus, are more primitive than Old World monkeys, just the opposite of traditional thinking.

Placing primate taxa on a polar map
from the the Paleocene-Eocene boundary (56mya, Fig. 3) shows a gradual migration and gradual accumulation of traits from Asia to Wyoming to Texas to South America. In this hypothesis, there is no need for a African rafting. The cladogram does not support a rafting hypothesis in any case.

Figure 3. The North Pole during the earliest Eocene from the CR Scotese Paleomap project with early primate skulls added, each demonstrating a gradual accumulation of traits. Rooneyia is an Eocene sister to the extant Aotus.

From this evidence,
primates arose from China and split East to Alaska and West to Egypt to produce New World and Old World primates.

Lemurs and basal primates: Strepsirrhini
According to Wikipedia this clade disappeared from most of the Northern Hemisphere as the climate cooled. The LRT documents that some New World lemurs evolved as they migrated to South America.

Tarsiers, Old World monkeys, apes and humans: Haplorhini
This clade traditionally includes New World monkeys, but the LRT does not support this nesting.

Keep in mind when scoring taxa on your own:
Juvenile primate skulls transform during maturity. The cranium descends, canines elongate, and additional molars erupt, and often males are more extreme in their transformation during maturation. (I had to learn this myself this weekend and it solved many problems).

And then there’s this “monkey wrench:”
The earliest primate fossils in the New World belong to Perupithecus (Bond et al. 2015). They report, “The new specimens are important for understanding the origin and early evolution of modern platyrrhine primates because they bear little resemblance to any extinct or living South American primate, but they do bear striking resemblances to Eocene African anthropoids, and our phylogenetic analysis suggests a relationship with African taxa.” This taxon is based on a single tooth along with three other smaller teeth.

I don’t have the expertise to judge tooth facet traits
and such traits are not scored by the LRT. I can present more complete skull and skeletal traits that present a different story that does not involve the improbable hypothesis of a trans-Atlantic rafting to evolve more primitive traits, rather than a more conventional terrestrial migration supported by fossils (Fig. 3; contra the BBC report above). For instance, Rooneyia (Texas, Eocene, Fig. 3) nests as a sister to the extant Aotus (Fig. 3). So New World monkeys were already in the New World and did not need to raft over from Africa (yet another reason to distrust deep time genomic results).

More importantly,
pertinent taxa in the LRT (Fig. 2), including Hapalodectes, Notharctus, Smilodectes, Rooneyia and Aotus are not included in the cladogram of Bond et al. 2015. If any of these taxa more closely resemble Perupithecus, Bond did not test them. So, perhaps this is yet another case of taxon exclusion leading to inappropriate results. This would be a good study for a student of paleo-primatology.

The following taxa have been recently added to the LRT:

Many earlier mistakes were corrected.
I learned along the way. I let the traits and scores determine the tree topology. Genomics and molecular clocks do not reflect or complement the LRT trait analysis. Adding taxa resolves issues and nests enigmas. The easier solution (Occam’s razor = walking, rather than rafting) should prevail here.

You don’t need to see the fossils firsthand
to solve many of the problems and enigmas that plague traditional paleontology. All you need is to include more taxa in analyses. This was low-hanging fruit that should have been discovered years ago by professional workers.

The traditional story: BBC monkeys sailed across the Atlantic story