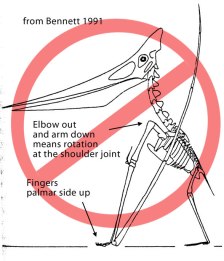 Figure 1. Click to enlarge. Bad Pteranodon reconstruction from Bennett 1991, 2000 in which the fingers faced palmar side up, were anteriorly oriented and the elbow bent at an impossible angle with regard to the shoulder joint. Unwin (2005) replaced the skull and flipped the hand palm down.

The orientation of the pterosaur humerus while walking is today’s topic.

Earlier we looked at various proposed humeral orientations in pterosaurs. Some were quite bizarre (Fig.1).

Currently there are two camps setting up support for their individual positions for pterosaur humeral orientation on the Dinosaur Mailing List (DML), on online forum for dinosaur fans.

Mark Witton (Fig. 2) supports an ungulate-like posture with the elbow largely below and somewhat behind the shoulder.

Greg Paul (Fig. 2) supports  a lateral configuration with the elbows out to the sides, like Bennett (Fig. 1).

I have a solution somewhere in the middle based on reinflating and reconstructing the crushed Triebold specimen of Pteranodon (Fig. 2) that I applied to Q. sp. (Fig. 2) and other pterosaur skeletons seen here. Many pterosaur workers like to label this pose “radical” and “highly controversial.” Actually it is the most conservative of the bunch.

Here (Fig. 2, mid right and far right) the elbows were held obliquely and posteriorly with forward motion chiefly through elbow and shoulder flexion and extension.

By the way I prefer Greg Paul’s shallow wing chord configuration because the fossil evidence supports it.

In Action
For those who missed it earlier, here (Fig. 3) is an animation of Pterodactylus showing pterosaur terrestrial locomotion, matching foot and hand prints from Crayssac, France. Note the orientation of the humerus, oblique and back. The elbow pumps up and down as the fingers implant ahead of the pes, but not too far ahead (Fig. 4). The next step overtakes the manus impression slightly. Very conservative. Based on fossil and ichnite evidence.

Figure 4. Click to animate. Walking pterosaur according to Bennett. Note the forelimbs provide no forward thrust, but merely act as props (at best) or, more likely, brakes.

Repercussions
Due to the neutral position (neither supinated nor pronated) of the pterosaur forearm, whenever the elbows are abducted laterally (as in the Paul configuration), the extended fingers rotate medially impressing more anteriorly. (You can experiment with this yourself). This does not match lateral finger impression tracks, but does match Bennett’s version (Fig. 1).

When the elbows are adducted to the vertical configuration (as in the Witton configuration), and with Witton’s finger orientation (palmar side anterior during flight), the fingers would be oriented posteriorly, as he shows in numerous illustrations, none of which match the fossil record. Removing the fingers from the equation, could the elbow be oriented nearly vertically, close to the chest? Probably not. There is a large medial condyle that would bang against the ribs whenever the elbow is tucked in too close to the torso. You discover this when you build skeletons. And the orientation of the shoulder glenoid is often oblique, depending on the rotation of the scapula and coracoid.

Figure 5. Dorsal view of n44 (Wellnhofer 1970, CM11426) in flight position. The dorsal side of the foot would have pointed laterally. Elbows out and back, obliquely, as in walking.

Oblique is best
The oblique orientation of the humerus pretty much matches that of many tetrapods and I have also argued that the humerus should be held at no more than a 60 degree angle from the spine in flight (Fig. 5) in order to not overextend the wing, to maintain good wing curvature (with the elbow higher than the leading edge), and to maintain a deep propatagium. Most pterosaur workers overextend the humerus and elbow. So, very conservative, neither too vertical nor too horizontal is best for the humeral orientation.

And, undisturbed fossils often preserve the humerus in the oblique configuration.

References
Bennett SC 1991. Morphology of the Late Cretaceous Pterosaur Pteranodon and Systematics of the Pterodactyloidea. [Volumes I & II]. Ph.D. thesis, University of Kansas, University Microfilms International/ProQuest.
Bennett SC 2001. The osteology and functional morphology of the Late Cretaceous pterosaur Pteranodon. Part I. General description of osteology. Palaeontographica, Abteilung A, 260: 1–112. Part II. Functional morphology. Palaeontographica, Abteilung A, 260: 113–153
Bennett SC 2008. Morphological evolution of the forelimb of pterosaurs: myology and function. Pp. 127–141 in E Buffetaut and DWE Hone eds., Flugsaurier: pterosaur papers in honour of Peter Wellnhofer. Zitteliana, B28.
Palmer C and Dyke G 2011. Constraints on the wing morphology of pterosaurs. Proceedings of the Royal Society B. published online 28 September 2011.
doi: 10.1098/rspb.2011.1529
Peters D 2002. A New Model for the Evolution of the Pterosaur Wing – with a twist. – Historical Biology 15: 277–301.