Earlier here, here, here, here and here we looked at the new book, “Pterosaurs” by Mark Witton (2013) and the many problems, mistakes and oversights that book contains. Today we’ll look at how Witton attempts to support the traditional hypothesis of a deep chord wing membrane attached at the ankle (Fig. 1). We covered that topic earlier here. 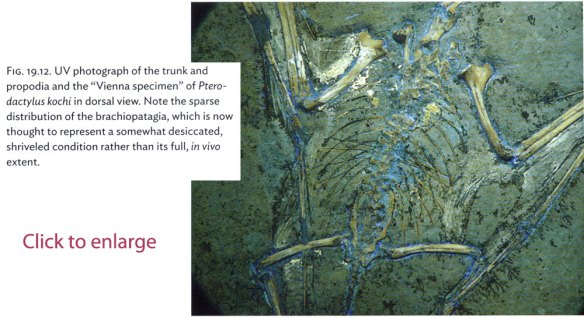 Figure 1. Click to enlarge. From Witton (2013) the Vienna specimen of Pterodactylus with a beautifully preserved wing membrane that is shallow at the elbow, stretched between the wingtip and elbow and includes a small fuselage fillet back to mid thigh. Witton’s caption indicates the ‘in vivo’ wing membrane is not accurately represented here ‘in situ’. He considers the membrane, “somewhat desiccated, shriveled.” So, what happens when the data doesn’t fit the hypothesis? Witton blames the data. The uropatagium and toe webbing, by the way, were unaffected.

When a bad hypothesis meets good data
Witton (2013) upholds the deep chord wing membrane hypothesis. So when excellent data indicates a shallow chord with fuselage fillet (the Stromer model, Fig. 8), Witton invents excuses for it (Fig. 1), calling it “dessicated” and “shriveled.” There are no other examples of desiccated membranes in pterosaur fossils. In any case, wing membranes contained little water in life, so how could they shrink when desiccated, especially when buried underwater? Adding to the confusion, on the same page (Witton 2013: 196), he illustrates a nicely preserved uropatagium and webbed toes from the same specimen. These, strangely enough, have not suffered at all from desiccation!

To clarify things
Peters (2002) published an image (Fig. 8) of what happens when the Vienna specimen unfolds its wings. Here it is animated (Fig. 2). Witton ignored this paper.

Figure 2. The Vienna Pterodactylus. Click to animate. Wing membranes in situ (when folded) then animated to extend them. There is no shrinkage here or in ANY pterosaur wing membrane. There is only an “explanation” to avoid dealing with the hard evidence here and elsewhere.

The real wings, based on the excellent data provided by the Vienna specimen, demonstrate the membranes were stretched between the wingtip and elbow, not the ankle.

Note: In all pterosaurs (Fig. 2) the wings were functionally disconnected from the hind limbs (contra the traditional view upheld by Witton), which means pterosaurs would have no trouble running around on the ground, bipedally or quadrupedally. 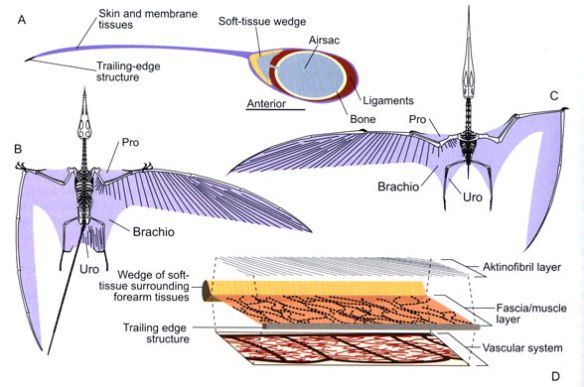 Figure 5. The Zittel wing from a species of Rhamphorhynchus. Click to enlarge. Here it is more than clear that the wing is very shallow at the elbow. There’s the humerus. All that’s missing is the body. Here the wing is stretched between the wingtip and elbow. What could be more clear? I’ve added a body (Fig. 8) if you really need one.

Non-believers
Upon seeing this image (Fig. 5) promoted as a great example of a narrow-chord wing membrane, Darren Naish considered this “ambiguous” because the specimen has no torso (Fig. 8). Why do you need a torso? You have the entire wing! And it follows the Vienna Pterodactylus (Fig. 1) configuration – narrow at the elbow (and the BRI 010 specimen, see Fig. 6!). There’s no trailing membrane here that – can – extend to the ankle (Fig. 8). There’s no example of such a wing membrane anywhere, except, to some eyes, in Sordes. But that was demonstrated to be due to a disarticulated radius and ulna, which can be identified in the fossil.

Now, just to be fair and open,
Helmut Tischlinger kindly sent me a short paper (Monninger et al. 2012) describing a new Rhamphorhynchus specimen BRI 010 (Fig. 6), in which “a linear structure runs along the trailing edige from the ankle to the tip of the wing finger.” That’s exciting. If verifiable, this would support the Witton model. Unfortunately, requests for hi-rez images of this specimen have gone unanswered. But I can present the image in low resolution from the abstracts, which are available online. 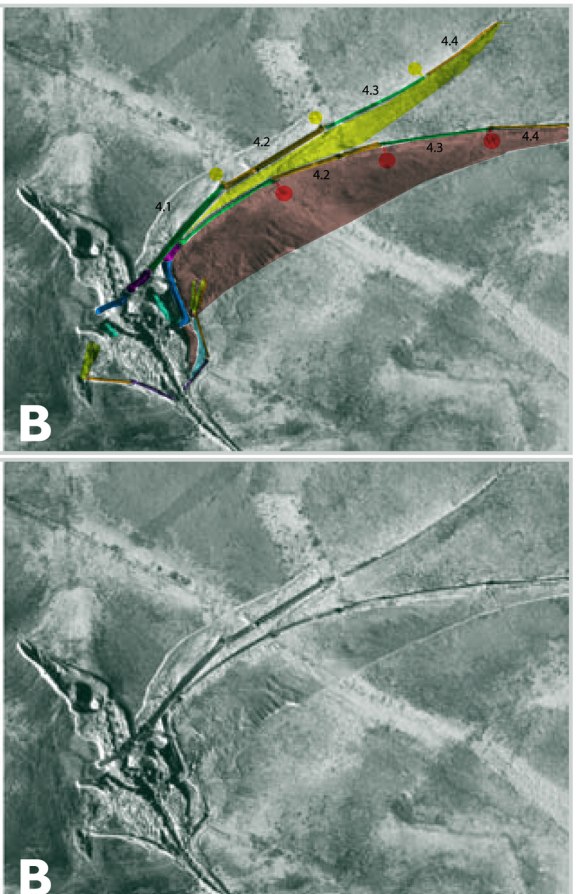 Figure 6. Rhamphorhynchus BRI 010. Click to enlarge. Color added. Here, the wing was reported to extend to the ankle. Unfortunately, the ankle is preserved right next to the elbow. Notably, the wing membrane does make a beeline for the elbow, not curving posteriorly to meet the knee. This is the configuration we also see in the darkwing Rhamphorhynchus.

Even at low resolution
we can tell that this is a Rhamphorhynchus with a well-preserved wing membrane with a trailing edge directed precisely at the elbow, as in the darkwing Rhamphorhynchus. Unfortunately the ankle has swung forward to the elbow. If the narrow-chord wing is correct, then this image needs no further explanation. If the deep-chord wing is correct we should see some sort of bending or curving toward the knee of the trailing edge (as shown in Fig. 3), but there is none.

Thank goodness!
By the text of the short paper I thought I was going to have to apologize to the pterosaur experts.

Figure 7. Dimorphodon by Mark Witton, with the pteroid articulating with the cup of the preaxial carpal.

Pteroid origin
Witton did not report the pteroid and preaxial carpal were present on Cosesaurus (Peters 2009), first observed but misidentified by Ellenberger (1993) who, unfortunately, flipped that manus over in order to have digit 2 longer than the lateral digits.

Anyway, a series of errors over time ultimately brings us to the truth of what is actually happening with the wings of pterosaurs, a configuration first envisioned by Stromer in 1910 (Fig. 8b).

Figure 8. Click to enlarge. The Vienna wing and the Zittel wing. Both Zittel and Peters 2002 added a body to the Zittel wing and arrived at the same unambiguous conclusion. The caption within the figure provides details.