Plantigrade Pteranodon Pes
Bennett (1991, 2001) determined that the pes of a specimen of Pteranodon, UNSM 2062, was plantigrade (Fig. 1). Note the interphalangeal lines are not continuous. That means the joints would not have worked in unison during the step cycle, a situation unknown in all other tetrapods. 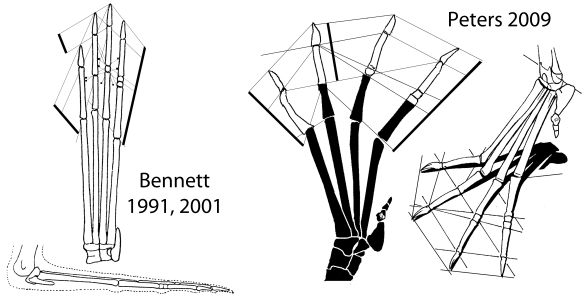 Digitigrade Pteranodon Pes
In a discussion on PILs (parallel interphalangeal lines, Peters (2000) determined that a restored chimaera foot belonging to two specimens of Pteranodon, KUVP 27827 and FHSM VP 2183, was digitigrade because the PILs (parallel interphalangeal lines) in that specimen were complete and continuous when the metatarsus was raised. Using a chimaera as an example was not a good idea (chalk it up to naiveté as that was my first paper), but the concept was confirmed by complete specimens UNSM 2062 (Fig. 1) and UNSM 50036 (Fig. 3) with nearly identical pedal element proportions. (Whew!)

A Few Years Later
After finding pedal variation in specimens of Rhamphorhynchus, Dorygnathus, Pterodactylus and other pterosaur genera, Peters (2011) tested several other Pteranodon specimens and found digitigrade configurations (UNSM 2062 and UNSM 50036), except in three plantigrade pedal specimens (Fig. 3). One belonged to AMNH 5099. The other two (in yellow, Fig. 3) belonged to the chimaera specimen KUVP 2212. One or both pedes likely do not belong to the skull of KUVP 2212, but were added to make the specimen “complete.”

Figure 3. A selection of Pteranodon pedes. On the left is a specimen, UNSM 50036, considered digitigrade and phylogenetically, but not physically, associated with P. ingens skull material. In yellow are the chimaera feet questionably associated withy the skull ofof KUVP 2212. On the right are the other two plantigrade pedes associated with P. sternbergi clade specimens.

Plantigrady vs Digitigrady
A plantigrade pes has continuous PILs when the metatarsals are against the substrate. When the metatarsals are nearly all the same length (as in UALVP 24238), or all aligned (as in AMNH 5099), this is more likely to occur because the the elevated metatarsophalangeal hinges does not push or pull the phalanges. However, when there are distinct differences in metatarsal length (as in UNSM 50036), then elevation of the metatarsus (at least during the step cycle, but perhaps during the standing configuration) tends to push and pull the phalanges as the shorter metatarsals tend to become more vertical than the longer metatarsals. If the pes is digitigrade in configuration, then the PILs will line up in simpler, more continuous patterns when the proper elevation is reached (Fig. 3). Proximal phalanges tend to elevate as well, but not always.

It’s also key to note the pedal differences are phylogenetically associated with cranial (Fig. 4) and other postcranial differences confirming that Pteranodon includes many more that just two species (contra Bennett 1991, 2001) and should not be divided into several genera (contra Kellner 2010).

The Value of Restoration and Reconstruction
Some paleontologists consider restoration and reconstruction unimportant. Unfortunately, they’re missing important morphological relationship data. Puzzlingly, Hone, Sullivan and Bennett (2009) argued against the value of PILs, despite stating several times that PILs could be drawn through joints and their examples all supported the concept as noted by Peters (2010), who defended his hypothesis. Notably they never tested PILs on a four or five-toed specimen.

Summary and Consequences
Surprisingly I found plantigrady in a select Pteranodon clade after finding digitigrady in the other branch of the same genus. It’s important to let the facts and data determine the results and patterns. Others have flatly stated that all pterosaurs were plantigrade (Unwin 1997, 2006) based on just a few plantigrade footprint samples (Mazin et al. 1995, Lockley et al. 1995 and others). This is an error (Peters 2011).

Bennett (1991, 2001) would have been correct in his assessment of plantigrady in Pteranodon, if he had only chosen a plantigrade pes as his example! Fortunately, his error led to the discovery of PILs. Chris once told me, “They would be important if they were real.” Well, they are, and this blog demonstrates their importance.