While virtually all Rotodactylus (Peabody 1948) tracks (digitigrade, proximal phalanges elevated, long stride, narrow gauge manus / wider pes, occasionally bipedal, first digit impresses at tip only, fifth digit impresses far behind the others, extremely variable speed) are the right shape to fit the Cosesaurus  (Ellenberger and Villalta 1974) pes, as we learned earlier here, some Rotodactylus tracks are BIG (4-5 cm length)! That’s way too big for Cosesaurus to fill. So the search is on for something like Cosesaurus, but far bigger and wide ranging (Fig. 1). Rotodactylus tracks have been found across Europe and the western USA and they range across the Early to Middle Triassic. 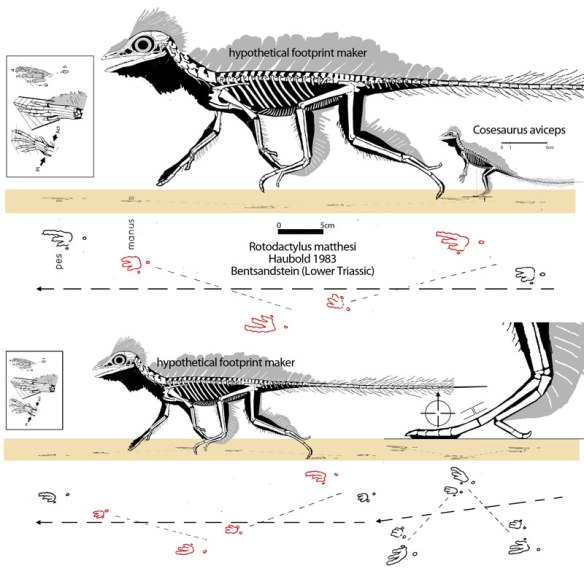 Figure 1. Click to enlarge. Scaling a quadrupedal Cosesaurus to the larger Rotodactylus tracks from Haubold 1983. Quadrant represents center of balance in the closeup foot showing how pedal digit 5 made those posterior impressions with a claw mark (Peters 2000). Graphic representation of a butt joint is nearby. The actual Cosesaurus is much smaller than these trackmakers. I enlarged the coracoid on the larger hypothetical trackmakers because they were not bipedal flappers. This configuration of pedal digit 5 is often preserved in basal pterosaurs.

So, after touting the perfect match of Cosesaurus to Rotodactylus tracks (Peters 2000), this is the first time I’ve conformed Cosesaurus to a quadrupedal pose to match these much larger tracks from the Early (=Lower) Triassic (Solling and Röt formations. Scythian/Anisian) of Germany. Haubold (1983) likened Lagosuchus (Maraschus), but  that’s not as good a match as Cosesaurus and Langobardisaurus, which were not so well known or described in the early ’80s.

Haubold listed 4 points that were significant in the development of archosaurs:

Figure 3. Click to enlarge. Cosesaurus and Rotodactylus, a perfect match. Elevate the proximal phalanges along with the metatarsus, bend back digit 5 and Cosesaurus (left) fits perfectly into Rotodactylus (right).

Rotodactylus tracks show extreme speed variation, which is rare for reptiles, but compliments the higher metabolic niche of fenestrasaurs.

So, what about those really BIG Rotodactylus tracks? They were made my really big mostly quadrupedal cosesaurs, evidently. And evidently, only the little cosesaurus were better bipeds, capable of flapping.

Figure 4. Rotodactylus from Haubold 1983 adapted from Peabody 1948. Unfortunately, no reptiles have a rotated and reversed pedal digit 5. But note the resemblance of the conjectural trackmaker to Cosesaurus, unknown in 1948. Note: most reptiles while moving do not have all four limbs on the  ground at one time. The elongated pedal digit 5 shown here is likely a drag mark. Size of these prints: between 4 and 5 cm in length, about the size of the examples in figure 1. Note, no claw marks on pedal digit 5.

So, widespread Rotodactylus tracks demonstrate that cosesaurs were widespread. They also appeared in a variety of sizes. While the large ones remained quadrupedal, like ancestral macrocnemids, the small ones became increasingly bipedal. This radiation of tritosaur lizards preceded the radiation of squamates in the Jurassic and later epochs.