My first encounter with the UUPM R156 (Uppsala Museum, Sweden) Dorygnathus was in Wellnhofer (1991), the famous pterosaur encyclopedia. The image was small and produced with halftone dots. Nevertheless I produced a reconstruction from it and I used the fuzzy data in the large pterosaur tree.

Now let’s draw a parallel. There was a time, before the advent of the Hubble telescope and the Voyager and other flyby satellites, when the best images we could get of the planets came form Earth-bound telescopes beneath an ocean of atmosphere. Fuzzy is the best way to describe them. The broiling atmosphere was the problem. Even in photos from the largest telescopes there’s not a a lot of resolution. Then, after 1990, Hubble images provided a magnitude leap in resolution because they were taken far above the atmosphere. 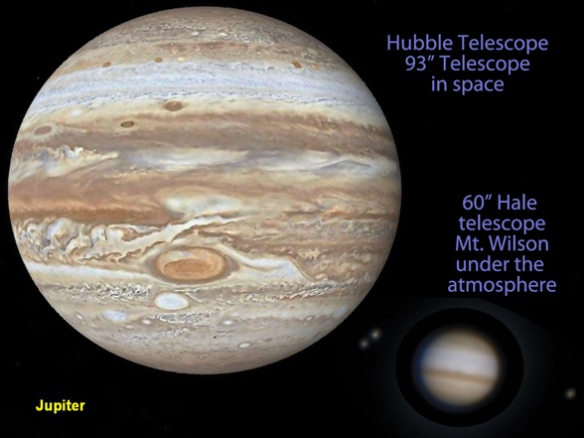 Figure 1. The planet Jupiter as seen from above the atmosphere (Hubble) and below (Hale). Having a poor resolution photo did not impede astronomers from gathering data on Jupiter.

But did that stop astronomers from studying Jupiter?  No. You take what you’re given. And when you’re given better data you refine your hypotheses. What you don’t do is denigrate others for gathering data using the best available data, fuzzy though it may be. That is what the opposing camp of traditional pterosaur experts (Naish, Witton, Bennett, Hone, Unwin) do. Those are the experts you’ll recall, who are most responsible for disfiguring pterosaurs. They are still hoping that pterosaurs had deep chord wing membranes, fingers that faced palms forward in flight, babies that did not look like grownups, strong sexual dimorphism, eggs that were buried under rotting vegetation, a cruropatagium controlled by the lateral digits and, perhaps worst of all, they still have no idea what pterosaurs are despite being given the answer some 12 years ago (Peters 2000). They could have discovered what pterosaurs are, just by testing, looking and comparing. But they refuse to.

Getting back to Dorygnathus R156
The skull of the R156 specimen (Fig. 2) appeared online and it offered better resolution than the Wellnhofer (1991) print. So I applied DGS to it and discovered several previously “missing” bones. None of these have been documented yet, as far as I know. Padian (2009) did not illustrate this specimen in his recent treatise on Dorygnathus, but described it nevertheless. Padian (2009) reported that Wiman (1925) wrote a detailed paper on the specimen. 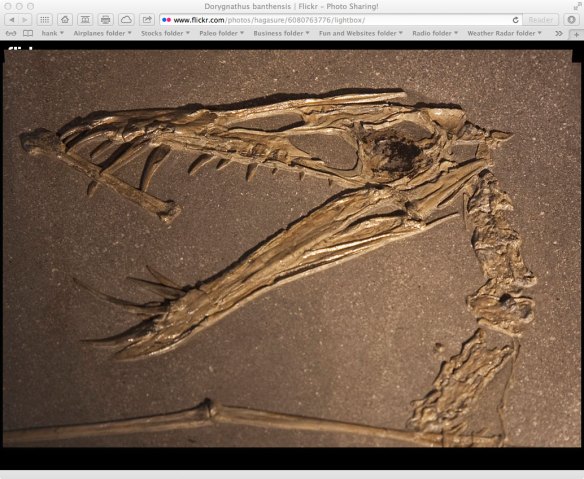 Figure 2. Click to enlarge. Here is the R156 specimen of Dorygnathus. It looks like a complete skull, but can you find the postorbital. pterygoid and squamosal? Image has been corrected for perspective from the original posted photo. That’s the left femur in the teeth.

Padian (2009) wrote that Wiman (1925) noted, “the bones of the left side of the skull behind the premaxilla are missing, so that one sees the posterior part of the skull from inside the right side.” Padian also considered the squamosal missing but made few comments about the skull other than the teeth and jaw symphysis, the most easily seen elements. He did not comment on the palate or occiput elements, which are more difficult to determine. 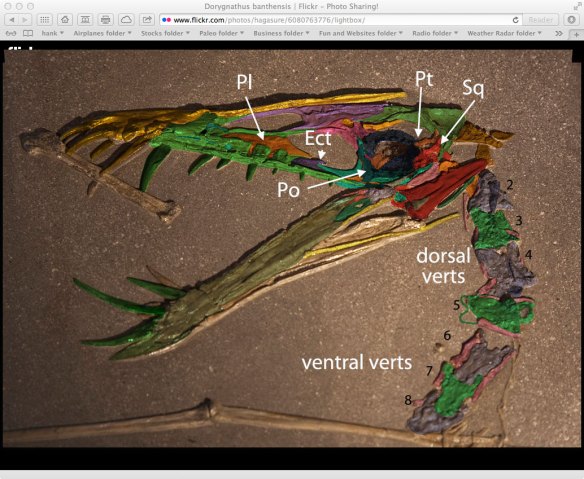 Figure 3. Click to enlarge. Digital Graphic Segregation applied to the skull revealing the location of the displaced postorbital and palatal elements. Note much of the left maxilla is missing, revealing the right maxilla in medial view. Look closely to see the replacement tooth coming up laterally on the longest dentary tooth.

DGS Step-by-step
Digital Graphic Segregation helps one understand crushed fossils by removing areas of chaos and segregating bones by color and layer. Coloring the easy bones first ultimately reveals the difficult ones. And that’s the beauty of it. Later, making a reconstruction of the elements lifted and placed digitally, confirms the fit of the rest.

The parietal lateral elements were broken off and slightly displaced. The postorbital lay inside the jugal (Fig. 3). I would be surprised if the palatal elements have ever been identified. They are currently folded up in the parasagittal plane. The major elements of the occiput are probably washed away along with the left side of the skull. 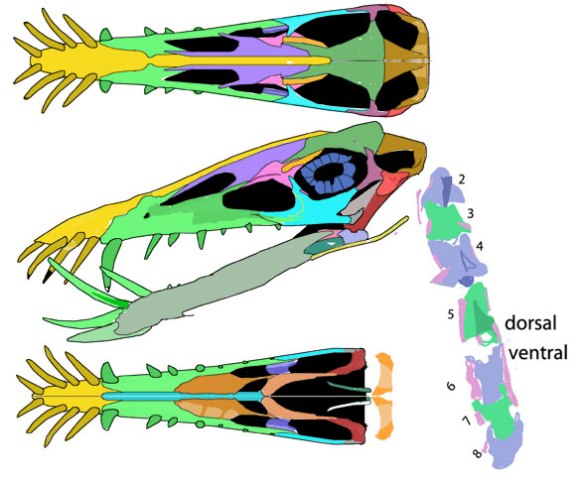 Figure 4. Dorygnathus R156 reconstructed in three views. Elements from the insitu image were lifted intact and reassembled here in the second phase of DGS. A reconstruction confirms the identification of the elements as the puzzle pieces fit back together in patterns that resemble sister specimens. There were probably more dentary teeth, but the present view (Fig. 3), taken from slightly below. does not reveal them.

Phylogenetic analysis
The original reconstruction was refined by the new reconstruction (Fig. 4), but only two or three traits changed scores in the large pterosaur tree. The result of these rescorings nested R156 with Sericipterus, which it nested next to previously. 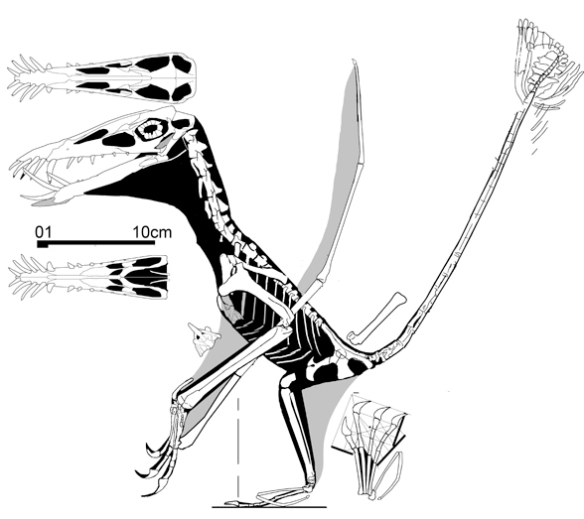 Figure 5. Doryganthus UUPM R156 revised with new data coming from the online image in high resolution of the skull and cervicals. Science marches on.

The nearly parallel pterygoids are atypical for pterosaurs in general, but become even more parallel in ctenochasmatids. R156 is in the lineage of ctenochasmatids according to the large pterosaur tree, something that should be obvious from its similarly protruding teeth. A while back those teeth were the first clues I had of a possible direct ancestry with ctenochasmatids. Later, by adding taxa, I realized that the tiny pre-ctenochasmatids transitioned larger forms like Angustinaripterus to Ctenochasma.

Figure 6. The Vienna specimen of Dorygnathus portrayed in Wiman 1925, which, ironically, is a study of the R156 Uppsala specimen, not the Vienna specimen shown here. The R156 specimen was not illustrated by either Wiman or Padian.

Wiman (1925) likewise did not figure the R156 skull
Like Padian (2009), Wiman (1925) did not illustrated the the R156 skull. Instead Wiman employed the Vienna specimen skull, after Arthaber. Compared to figure 3, several of the suture differ here, perhaps attributable to a more primitive knowledge of the pterosaur skull back in 1925. No known pterosaur has such a large quadratojugal, nor such an oddly shaped jugal.

2 thoughts on “Dorygnathus – where are the postorbital bones? DGS to the rescue.”