Aurornis xui (Godefroit et al. 2013, Late Jurassic, 50cm in length, 160 or 125mya) is one of the many outgroup taxa known for Archaeopteryx and the birds, but it nests here as the closest of the tested ones.

Auronis is a small, gracile dromaeosaur
without a large elevated pedal digit 2. The skull is complete, but slightly disarticulated (Fig. 1). A little DGS colorizes the bones. These can then be reassembled to form a skull in lateral view.

Fig. 1 Aurornis skull in situ, various elements segregated from the in situ fossil and reassembled into a complete and articulated skull. The hole in the surangular is an artifact. The little lavender ovals are displaced sclerotic bones. Below is the original published image of the Aurornis skull.

Like many other small theropods,
Aurornis was feathered, agile and fast, a descendant of basal dromaeosaurids, like Halplocheirus. In palatal view, the internal nares are located on the anterior palatines and the anterior palate is narrow but solid. The premaxilla is still relatively short and toothed. The pterygoids are narrow and have lost their primitive triangular shape. As a result of taphonomy, tracings for the anterior dentary teeth are distinct from one another. The wider, more typical, pointed teeth are the correct morphology.

On a side note:
Pappochelys (‘grandfather turtle’) has been getting a lot of press, none critical. Take a fresh look at all the PR here.

On another side note:
Chilesaurus, which the large reptile tree nested as the long sought and current most basal member of the Ornithischia, and we looked at earlier here, was given a good look over at the TheropodDatabase blog here.  Evidently others also think the original Chilesaurus report has issues.

Added July 09, 2015
Dr. Andrea Cau’s note and the paper she sent, along with the SuppData downloaded served to increase the accuracy of these Aurornis images.

Figure 3. The manus of Aurornis as originally interpreted (above). As reinterpreted by comparison to Archaeopteryx below. Digit 3 was damaged and difficult to interpret. Digit 0 was originally overlooked. No only was Archaeopteryx smaller, it was more fully feathered and its bones were more gracile, all adaptations for flight.

I have not seen the fossil itself,
but a DGS tracing of this image of the hand (Fig. 3) suggests ungual 2.3 was buried beneath the m2.2, not absent as originally indicated. Digit 3 of Aurornis was badly damaged, but by comparing it to Archaeopteryx a more accurate interpretation can be rendered with the proper number and length of phalanges.

Godefroit et al. reported the frontal was fused medially, but the fossil shows a medial split. They interpreted the pes with a fused metatarsal 3+4. That is probably not true as metatarsal 4 is likely buried in the matrix. 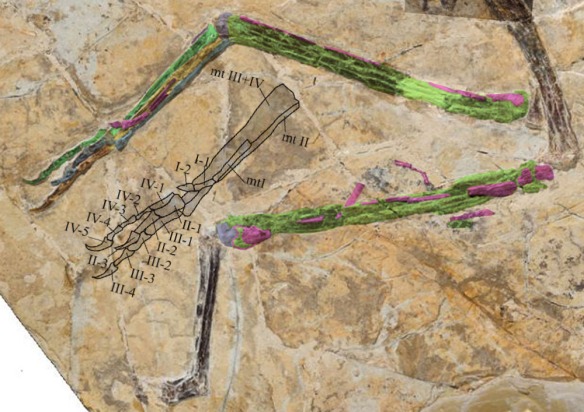 Figure 5. Aurornis hind limbs with bones colored. Here metatarsal 4 is distinct from mt3 and the fibula is identified. Original interpretation of fused mt3+4 in gray. Mt5 is a tiny vestige close to the ankle. Click to enlarge.