We’ve heard this before.
Links below.

From the Wang et al. 2021 abstract:
“Recent discoveries of well-preserved Mesozoic mammals have provided glimpses into the transition from the dual (masticatory and auditory) to the single auditory function for the ossicles, which is now widely accepted to have occurred at least three times in mammal evolution.”

Wang et al. are not working from a valid phylogenetic context. They are not considering the possibility, hypothesized in the large reptile tree (LRT, 1593+ taxa) of a phylogenetic reversal in which the inner ear bones, which recapitulate phylogeny during embryonic ontogeny in placentals, could have stopped developing and stopped migrating to the typical placental position posterior to the mandible.

“Here we report a skull and postcranium that we refer to the haramiyidan Vilevolodon diplomylos (dating to the Middle Jurassic epoch (160 million years ago)) and that shows excellent preservation of the malleus, incus and ectotympanic (which supports the tympanic membrane).

Figure 1. Basal mammals and Vilevolodon as figured by Meng et al. Note in the other taxa the two jaw joints are nearly coincident. Not so in Vilevolodon.

From the Wang et al. abstract (continued)
“After comparing this fossil with other Mesozoic and extant mammals, we propose that the overlapping incudomallear articulation found in this and other Mesozoic fossils, in extant monotremes and in early ontogeny in extant marsupials and placentals is a morphology that evolved in several groups of mammals in the transition from the dual to the single function for the ossicles.”

Unfortunately
Wang et al. are pinning all their phylogenetic hopes on the inner ear bones. Therefore they are  “Pulling a Larry Martin.” Don’t do that. When placed into a phylogenetic analysis that considers traits from the entire skeleton and a wide gamut of mammals and pre-mammals, Vilevolodon nests within the placental clade Glires (the gnawers = rodents, rabbits, shrews, aye-ayes, multituberculates, etc.) We’ve known this for several years.

Wang et al. 2021 provide four prior analyses
in their SuppData, (references below) all of which employ suprageneric taxa, none of which test pertinent members of Glires.

In summary:
When tested against more taxa Vilevolodon is recovered as a derived member of Glires (rodents, rabbits, shrews, etc.) sharing with other multituberculates a neotonous retention of the embryonic condition, prior to the migration of the inner ear bones to the base of the skull, posterior to the mandibles. Evidently in their typical adult placental position typical ear bones interfered with the long slide of the mandible during gnawing and mastication, so retained the embryonic condition. The authors noted this ‘transition” in placentals in their abstract, but did not consider the possibility of a reversal or neotony.

Revised July 19, 2020
with new bone identities given to several lobefin fish, correcting the mistakes of Thomson 1966.

The hyomandbular is the largest bone
in the entire body of the basal ray-finned fish Trachinocephalus (Fig. 1). Over time and phylogeny it evolves to become the smallest bone in the human body, the stapes (Fig. 3), one of the ultra tiny sound-conducting bones of the middle ear.

Along the way,
the large reptile tree (LRT, 1656+ taxa) presents a new (and heretical) lineage of tetrapod ancestry, distinct from the traditional one that includes Ichthyostega and Acanthostega. Today we go below the surface and formally introduce ‘the lineup.’

Some bones are relabeled
from the diagram found in Thomson 1966 (modified in Fig. 2), who presented several layers of skull bones (cranial, palatal and dermal) in the the Permian megalichthyid rhipidistian fish, Ectosteorhachis, a late-survivor of an earlier (Mid-Devonian) radiation that ultimately produced tetrapods and humans. Thomson mislabeled the dentary as a maxilla (mx) in his diagram, but all other labels are traditional.

In most fish
the hyomandibular is roofed over by the otherwise unremarkable intertemporal, which anchors it dorsally.

The more derived traditional transitional tetrapods,
Acanthostega and Ichthyostega, have a postsquamosal, but this appears as a reversal, a neotonous trait. These two are secondarily more aquatic than their ancestor, Ossinodus.

Figure 2. Ectosteorhachis skull from Thomson 1966 with layers to show the brain case and palatoquadrate. Some bones are relabeled in the revised view.

The hyomandibular decreases in size
in most later tetrapods (Fig. 3), where it continues to shrink into the auditory channel where it is then known as the stapes.

At the same time, the intertemporal
disappears or fuses to nearby skull bones in several derived basal tetrapods and basal reptiles, all by convergence.

Figure 4. Evolution of the tetrapod mandible and ear bones leading to humans in lateral and medial views, first printed in From The Beginning, the Story of Human Evolution (Peters 1991), colors added here.

The quadratojugal first appears in the tetrapod lineage
in Gogonasus (Fig. 1) after the elongate maxilla of Onychodus splits in two.

Finally,
sharks also have a palatoquadrate, but it is composed of a fused lacrimal, jugal and squamosal with a tooth-bearing premaxilla and maxilla fused to the ventral rim. The pseudo- or plesio-palatoquadrate illustrated by Thomson 1966 in Ectosteorhachis and other rhipidistians,is not homologous and is comprised of different bones.

References
Thomson KS 1966. The evolution of the tetrapod middle ear in the rhipidistian-amphibian transition. American Zoologist 6:379–397.

A reader wondered about
tympanic (auditory) bullae (ear container bones) in desmostylians. Then I wondered, too. All whales are famous for having them. Nobody talks about them in desmostylans. So what gives? Here are the data:

Short answer:
apparently bullae are easily knocked off and/or ignored during the process of fossilization and extraction, both in mysticetes and desmostylians. Some examples follow:

Gray whale (Eschrichtius)
Bullae were present, but somehow got knocked off when it came time to draw the diagram (Fig. 1).

Figure 1. Gray whale (genus: Eschrichtius) in which bullae were present, but omitted from a palate diagram.

Figure 3. The pre-desmostylian Cornwallius. Here the tympanic bulla (bright green) was considered “a mass” in the text and otherwise not labeled.

Neoparadoxia (basal desmostylian)
Here you can see the depression that receives the bullae, but the bullae became missing at some stage in the process.

Figure 4. Desmostylus with missing bullae replaced in the empty spots left behind. Skull is obviously distorted and missing a big part of the cranium.

Caperea, a basal right whale
Here’s an odd one. Not sure what happened to the bulla in ventral view. They seem to appear in occiput view.

Figure 5. Caperea, a basal right whale, apparently missing the bullae in palate view that it had in occipital view. If not, please advise.

Hippopotamus
This goes back somewhat on the tree, but hippos are in the lineage of baleen whales in the LRT and their auditory bones are present. 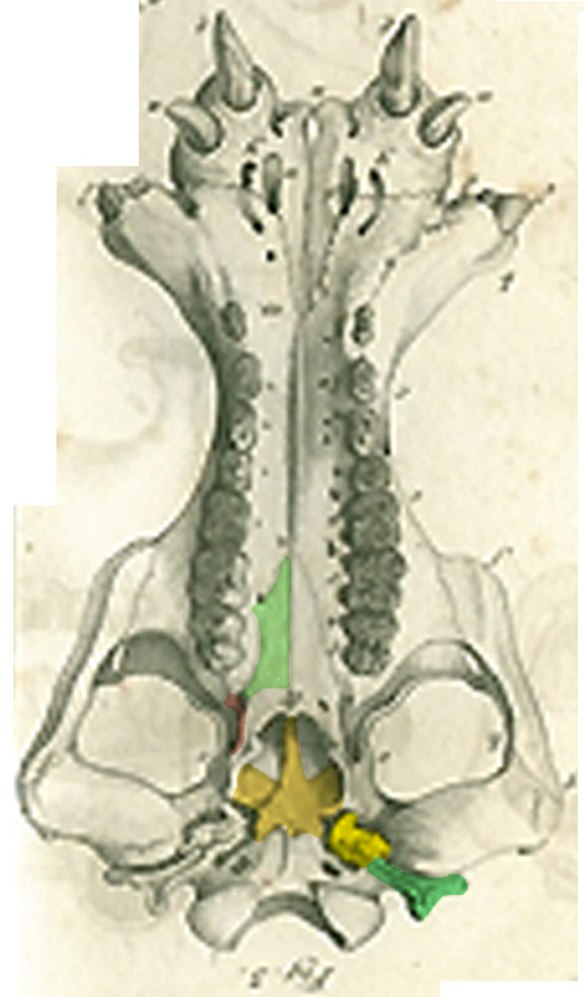 Ear bones compared
Baleen whale bullae greatly resemble toothed whale bullae. It’s true. Based on phylogeny, we’ll have to call this convergence. So is the loss of teeth in the rostrum of the sperm whale and blue whale. Convergence happens, but let’s keep an eye out for those bullae, now that we know what should be there.

Figure 1. The ear in three living archosauromorphs, crocs, mammals and birds. The ear flap seen in crocs and the platypus is by convergence, perhaps to keep the water out.

Living members of the new Archosauromorpha (Fig. 1, crocs, birds and mammals) all have well-developed ears, but only higher mammals have the erect external ears we typically think of.

At the base of the Archosauromorpha we don’t see evidence for ears. The stapes, the first and typically (except in mammals) the only ear bone, tends to be robust, helping to support the jaws. That evidence for an eardrum frame first appears in basal therapsids as a creation of an angular flange that thereafter thins to become a gracile encircling eardrum frame (Fig. 2). In higher mammals the

Figure 2. Reptile Ears, basal Archosauromorpha. If external ears were present, they did not leave any obvious frame at the back of the skull, as in lepidosauromorphs. Basal therapsids developed an eardrum frame derived from the angular bone. Some workers think the large stapes in basal reptiles did not permit sound reception. Others think the large stapes supported a very large eardrum not otherwise supported (not sure how that could be kept taut).

There is likewise not much of a clue in basal diapsids with regard to their hearing. We skip the enaliosaurs, which were underwater creatures and don’t see a lepidosauromorph-like eardrum frame on any taxa before protorosaurs like Czatkowiella (Fig. 3) and perhaps some younginids, but data is sparse on them at present. Prehistoric crocs and dinosaurs probably developed like living crocs and birds.

Figure 3. Reptile eardrums – diapsids, crocs and birds. No marine reptiles of the clade Enaliosauria are included because no clear evidence for ears appears in that underwater clade. Crocs have ears higher on the skull than birds. All other eardrum placements are guesses. Like lepidosauromorphs the squamosal appears to have framed the eardrum at the back of the skull as shown.

Figure 5. Bird middle ear cross section. The stapes is the only bone in the auditory link.

The more birdy or croc-like a taxon gets, the easier it seems to be able to imagine an eardrum framed at the back of the skull and deeper than at the surface.

Here, if anyone has additional data, I will gladly add it later.

Figure 1. Click to enlarge. A series of jaw bones demonstrating the gradual accumulation of traits that changed them into ear ossicles and an eardrum frame. Largely from Allin 1975.

Today we’ll start a new series: “Freed from their primitive function” in which we’ll look at various parts of the vertebrate anatomy that started off doing one thing, but ended up doing another. These are excellent examples of evolution.

Today we’ll look at the posterior jaw bones that started off articulating with the skull and ended up transmitting sound in mammals. It was first recognized as early as Reichert (1837) 20 years before Darwin’s “On the Origin of Species’ (1859) and subsequently confirmed and elaborated by several workers (e.g. Allin 1975, Kemp 2007). Reichert employed embryology and comparative anatomy as he reported in the developing mammalian embryo that the incus and malleus arise from the same first pharyngeal arch as the mandible and maxilla. (Which reminds us that before these were jaw bones they were gill rims!)

Allin (1975) drew on the several paleontological examples then known to more fully fill in the story (Fig. 1) demonstrating graphically the gradual rise and expansion of the coronoid process along with the reduction of the postdentary jaw bones. This series also demonstrates the evolution of the canine and molar teeth. The evolution of the angular (lower postdentary jaw bone) into a thin flange that encircled an open space then continued to reduce until it ultimately framed the eardrum. Allin (1975) suggested at an early stage the angular framed a very large eardrum. Later, Kemp (2007) thought the postdentary bones were too large and still functioning as jaw bones to allow this, suggesting instead that the eardrum formed in the earliest mammals when the articular became very much more gracile and smaller. The unusual anatomy of the postdentary bones would have supported ventral jaw muscles acting to open the jaws.

It’s interesting to note that even as late as Homo sapiens the mandible was still evolving a chin, a feature not seen in prior taxa, including pre-human anthropoids.

Kemp TS 2007. Accoustic transformer function of the postdentary bones and quadrate of a nonmammalian cynodont. Journal of Vertebrate Paleontology 27(2): 431-441.