All pterosaurs have a sternal complex
(sternum + interclavicle + wrap-around clavicles), even the flightless ones. This tiny specimen (Fig. 1) probably had a sternal complex, but where is it? As everyone knows, it should be between the elbows, but it’s not there.

Figure 1. Tiny pterosaur mistakenly named Pterodactylus? pulchellus. I cannot find the sternal complex here. It should be between the elbows. That tiny red triangle under the mid-humerus is the ventral coracoid.

Pterodactylus? pulchellus BM NHM 42735 is the same size as the closely related Gmu-10157 specimen, but has a longer rostrum. The BM NHM specimen is one node closer to the common ancestor of cycnorhamphids + ornithocheirids in the large pterosaur tree (LPT, 242 taxa). The sternal complex appears to be missing or displaced in this otherwise undisturbed tiny specimen. Soft tissue confirms the narrow chord wing membrane and dual uropatagia. Pedal digit 5 remained long.

These tiny adults,
(Fig. 2) derived from slightly larger scaphognathids (Fig. 3) are transitional taxa undergoing phylogenetic miniaturization at the genesis of Cycnorhamphidae + Ornithocheiridae. They have not been given novel generic names by established workers because the traditionalists among them consider these to be babies/juveniles of larger, undiscovered taxa. Thus they have remained relatively ignored, despite their pristine preservation and sometimes gravid condition.

Figure 3. Click to enlarge. Taxa in the lineage of Cycnorhamphidae + Ornithocheiridae in the LPT.

The key to finding the missing sternal complex
on this relatively undisturbed specimen is to look to the only area of the skeleton that is slightly disturbed (Fig. 4). The gastralia basket is expanded beyond its natural contours in the BM NHM specimen and that’s where I find (thanks to DGS) a displaced sternal complex, separated from the coracoids and jammed back into the stomach, surrounded by gastralia, almost hidden from view.

Figure 4. Here the sternal complex of the BM NHM 42735 specimen is colored indigo.

Not sure how that happened during taphonomy,
but there you go: mystery solved!

Figure 5. Shenzhoupterus skull in situ with sternum in blue.

While we’re on this subject,
Shenzhoupterus does not nest with azhdarchoids, as originally hypothesized, but with tiny Nemicolopterus, between dsungaripterids and tapejarids in the LPT—and neither of these clades are related to azhdarchids in the LPT, contra traditional thinking that excludes tiny taxa and large swathes of congeneric taxa.

Moganopterus (Fig. 1, Lü et al. 2012) is one of the oddest of all pterosaurs, with its elongated jaws. 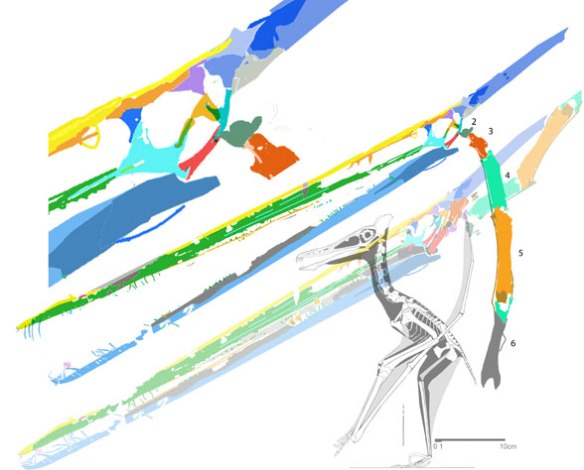 The resemblances between both clades are remarkable. It is easy how one could waver toward the boreopterids. The Lü et al. 2012 study recovered over 33,000 most parsimonious trees.

Traits shared with cycnorhamphids
Like Cycnorhamphus (Fig. 1) and distinct from boreopterids, Moganopterus has an upper temporal arch set lower on the skull, teeth restricted to the anterior jawline, a cranial crest, a posteriorly descending jugal, and cervical ribs. If anyone has data that could change this nesting, please let me know of it. References

Pterodactylus grandipelvis is known from two “grand pelves.” And they’ve been known for about 150 years. TM6927 is the holotype (von Meyer 1859/1860). BSP 1883 XVI is the referred specimen. Oddly, both are preserved exactly alike, as a sacrum, two ilia and prepubes. An ischium impression may be ephemerally present on the holotype.

Pterodactylus grandipelvis is a nomen dubium according to S. C. Bennett 2013.

Pterodactylus grandipelvis would have been one of the largest pterosaurs of the Late Jurassic Solnhofen Limestone. I looked around at reptileevolution.com and could find no better match for it than Cycnorhamphus (Fig 3). Notably the “Pterodactylus” grandipelvis was at least twice the size.

We know of larger cycnorhamphids, like Moganopterus from China. Giant animals are relatively less numerous in most ecosystems. Too bad we haven’t found more of this pterosaur in the last 150 years.

Any additional data on any of these taxa would be gratefully appreciated.

Lü et al. 2012 recently reported on a new Early Cretaceous pterosaur, Moganopterus zhuiana (Fig. 1). It is the largest toothed pterosaur found to date. And… it’s another one of those gotta-see-it-to-believe-it pterosaurs. The skull was 3/4 of a meter in length! The skull and anterior cervicals were discovered by splitting a plate and counterplate, so each one largely exposes the inside of the skull. 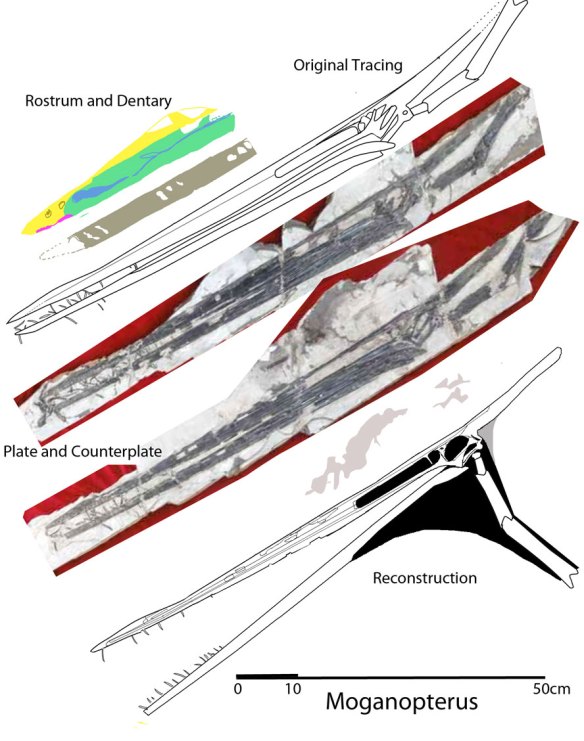 Figure 1. Click to enlarge. Moganopterus, the largest toothed pterosaur. The counterplate has been photographically reversed.

The Lü et al. 2012 abstract:  A new pterosaur Moganopterus zhuiana gen. et sp. nov. is erected based on a complete skull with lower jaws and anterior cervical vertebrae. It is characterized by much elongated upper and lower jaws with at least 62 total, long, curved teeth with sharp tips, a well developed parietal crest extending posterodorsally, forming an angle of 15 degrees with the ventral margin of the skull, the ratio of length to width of cervical vertebrae greater than 5:1. The skull length is 750 mm, and it is the largest toothed pterosaur found so far in the world. Based on this new pterosaur, the Boreopteridae can be divided into two subgroups: Boreopterinae sub-fam. nov. and Moganopterinae sub-fam. nov., which is also confirmed by the phylogenetic analysis.

Lü et al. (2012) nested Moganopterus with Feilongus, which was confirmed by the large pterosaur study. Their new pterosaur family tree will be our focus tomorrow.