No surprises here.
Daeodon shoshonensis (Cope 1878), the last and largest of the entelodonts, nests with Archaeotherium in the large reptile tree (LRT, 1383 taxa). A huge skull and slender limbs tipped by two fingers and two twos characterize this genus. A bison-like hump of dorsal spines helped support the mighty skull. 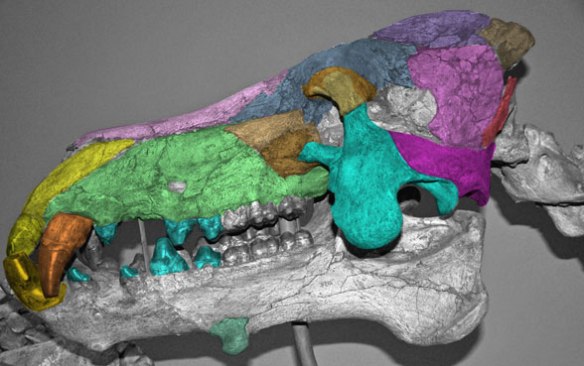 Figure 1. Skull of Dinohyus + Daedon with bones colored using DGS. Note the reappearance of the postorbital ring composed of postfrontal and postorbital. The jugal extends to the jaw joint, something that usually only happens in marsupials. The jaw joint is at the back of the skull, convergent with some multituberculates, crowding out the ear bones. Not much of ascent on that coronoid process of the dentary. And is that a splenial poking out as a mandible horn?

Repeating the caption here:
Note the reappearance of the postorbital ring composed of postfrontal and postorbital. The jugal extends to the jaw joint, something that usually only happens in marsupials. The jaw joint is at the back of the skull, convergent with some multituberculates, crowding out the ear bones. Not much of ascent on that coronoid process of the dentary. And is that a splenial poking out as a mandible horn?

References
Cope ED 1878. On some characters of the Miocene fauna of Oregon. Paleontological Bulletin. 30: 1–16.
Peterson O A 1905b. A correction of the generic name (Dinochoerus) given to certain fossil remains from the Loup Fork Miocene of Nebraska. Science. 22: 719.
Peterson OA 1909. A revision of the Entelodontida”. Memoirs of the Carnegie Museum. 4 (3): 41–158.

The value
of the large reptile tree (LRT, 1013 taxa) and the reconstructions gathered together at ReptileEvolution.com lie in their ability to put faces on names (Figs, 1) sometimes to scale (Fig. 2) to help one recognize patterns that may have gone unrecognized while just looking at names and scores.

These are the mammals that nest with one another
as sisters after deletion of more derived taxa in each of their several clades (listed at right, Fig. 1). Thus they, more or less, represent the basal radiation of hoofed mammals prior to each clade radiation. And to no one’s surprise, they look like each other, despite wide variations in size.

Frankly,
I’m reexamining the traits of these taxa because the LRT had trouble resolving them. There were mistakes in there. Now, after some score corrections, the resolution is complete again, but some Bootstrap scores have risen to just above 50. Not great, but better than below 50. Remember, I don’t have access to these specimens and sometimes work from published drawings.

Figure 1. Skulls of taxa nesting at the bases of several mammal clades starting with mesonychids. The differences are harder to see than in derived taxa in each clade (column at right). See figure 2 for skeletons to scale.

Some of these basal taxa
gave rise to baleen whales. Others were ancestral to giraffes, elephants, horses and everything in between. None of these taxa are nearly so famous or interesting to the general public, but it is from these generalized (plesiomorphic) taxa that the few and subtle evolutionary changes that are key to each clade first make an appearance.

Figure 2. Skeletons of taxa basal to various clades derived from basal mesonychids, all to scale. Note the presence of phylogenetic miniaturization at the base of the Artiodactyla. Consider this scenario: mesonychids radiated widely, including to create larger and smaller taxa. The larger homalotheres did not radiate greatly, as far as we know. On the other hand, the smaller taxa radiated to become a long list of extinct and exact hoofed taxa. And, of course, the mesonychid clade radiated to include today’s hippos and baleen whales.

Sometimes a ‘show and tell’ drives a point home
better than just a ‘tell’. Even so, these are not the precise individuals in the direct lineage of known derived taxa, but the close relatives of those perhaps eternally unknown and hypothetical individuals. The suite of traits that lump and separate these taxa can be gleaned from the present MacClade file, continually added to and updated, and available here., which is where you can also see the cladogram from which the above taxa were pulled. 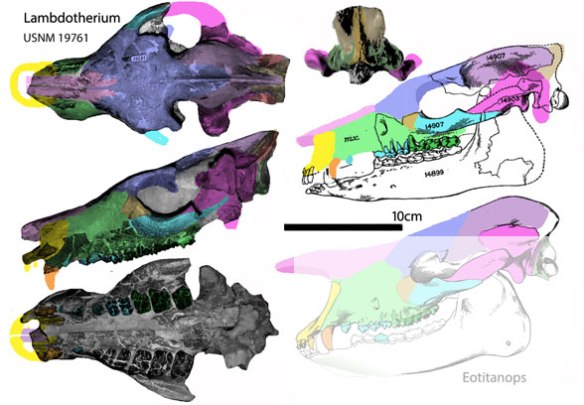 Figure 1. Lambdotherium traditionally nests with the basal brontothere, Eotitanops (ghosted here), but here nests with Ancodus, a basal artiodactyl. Brontotheres have a very tall naris. Pigs do not.

I don’t know of any post-crania
for Lambdotherium. Note that Ancodus (Fig. 2), like Eotitanops, has a pentadatyl manus. Lambdotherium was traditionally considered a brontothere based on its teeth. The LRT employs relatively few dental traits. And maybe some specimens need to be reexamined. The very high arch of the Lambdotherium squamosal, among many other traits, is more similar to pig-like taxa, than to basal brontotheres, which here nest closer to rhinos, than to horses, contra the Wikipedia report on brontotheres.

Distinct from both rhinos and horses,
brontotheres have four toes on the forefeet. All are derived from a sister to Hyrachyus, which likewise has four toes. 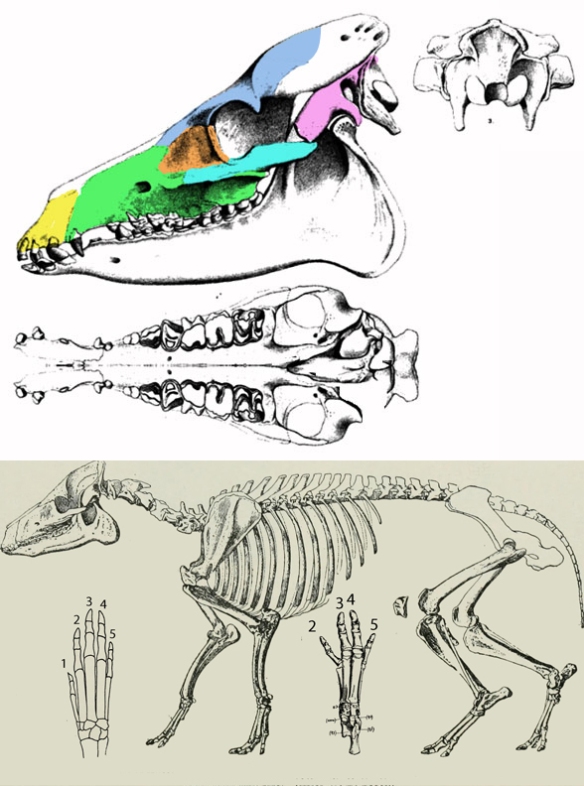 Figure 2. Ancodus nests as a more derived sister to Sus and it retains digit 1 on the manus and pes.

It’s an early Eocene pig
according to the large reptile tree (LRT, 1003 taxa). A large gamut minimizes inclusion set bias and gains greater authority with every added taxon. It also reduces the average phylogenetic distance between taxa, all of which are species and individuals, not suprageneric taxa.

Figure 1. Danjiangia nests with the extant pig, Sus, in the LRT. Note the very low naris and nasal. The lost skull could have been elevated, as imagined here after phylogenetic analysis.

Danjiangia pingi (Wang 1995; early Eocene) was originally described as a basal chalicothere with brontothere traits. Then Hooker and Dashzeveg (2003) nested it as a basal brontothere (without including any other brontotheres). Mihlbacher 2008 and others used it as an outgroup to the brontotheres. The posterior skull is not known, but note the rise over the orbits suggesting a tall cranium, as in Sus (Fig. 2). Also note the very low naris below the low nasals. Usually you don’t see nasals so low, and perhaps that is due to taphonomic shifting.

Figure 2. Skull of the extant pig, Sus in several views. Note the elevated cranium and squamosal.

The long fused dentary
of Danjiangia is a trait also shared with pigs and other taxa, like chalicotheres, by convergence.

Figure 3. Skeleton of Sus, the pig. It provides good clues as to the missing postcranial skeleton of Danjiangia.

Sus the pig
(Fig. 3) provides good clues as to the missing postcranial skeleton of its sister taxon, Danjiangia. The other model for post-cranial details is the basal artiodactyl, Cainotherium (Fig. 4).

Fig. 4. Cainotherium nests at the base of the Artiodactyla or even-toed ungulates. I wonder if it had five fingers, even if vestiges, given that Ancodus, a derived artiodactyl, retains five fingers.

Why was the pig connection missed by others?
For the same reason that modern workers continue to include pterosaurs with archosaurs. It’s a tradition. Nobody wants to do the extra work of testing other candidate taxa. Nobody wants to acknowledge contrarian studies. Paleontology tends to run very slowly as we learned earlier here. Hail, hail the status quo!

Figure 5. Subset of the LRT focusing on ungulates, which split into three clades here. Note the nesting of Sus together with Danjiangia.

Get ready for a good dose of heresy
brought to you by the large reptile tree (LRT 1003 taxa) a fully resolved online morphological study.

“However, in 2009 morphological and molecular[ work has found that aardvarks, hyraxes, sea cows, and elephants are more closely related to sengis, tenrecs, and golden moles than to the perissodactyls and artiodactyls, and form Afrotheria. Elephants, sea cows, and hyraxes are grouped together in the clade Paenungulata, while the aardvark has been considered as either a close relative to them or a close relative to sengis in the clade Afroinsectiphilia. This is a striking example of convergent evolution.

“There is now some dispute as to whether this smaller Ungulata is a cladistic (evolution-based) group, or merely a pheneticgroup (form taxon) or folk taxon (similar, but not necessarily related). Some studies have indeed found the mesaxonianungulates and paraxonian ungulates to form a monophyletic lineage, closely related to either the Ferae (the carnivorans and the pangolins) in the clade Fereuungulata or to the bats. Other studies found the two orders not that closely related, as some place the perissodactyls as close relatives to bats and Ferae in Pegasoferae and others place the artiodactyls as close relatives to bats.”

About that last hypothesis ~
If I had recovered that relationship I would expect pitchforks and torches.

Today
the LRT presents a hypothesis of mammal relationships in which hippos nest apart from other artiodactyls and perissodactyls nest apart from those two, separated by the elephant/hyrax/manatee clade with the hyrax-like Ectocion at it base (Fig. 1).

Figure 1. Subset of the LRT focusing on ungulates, which split into three clades here.

Note:
Hippos do indeed nest with whales, but only the mysticete whales. And desmostylians separate hippos from mysticetes. Odontocetes, like Orcinus, had a separate ancestry as we learned earlier here. The even-toed artiodactyls nest together with pig-types toward the base and deer-types a little later. The odd-toed perissodactyls nest together.

There are no
tenrecs, aardvarks or golden moles in this sector of the LRT.

Ungulata is not a monophyletic cladistic group,
unless it also includes the elephants and whales with Mesonyx as a basal member, (a taxon close to the last common ancestor). I’m not the first one to come to this conclusion. Probably best just to drop this name from usage and realize that hooves appeared several times in mammal evolution.

A little extra study
cleared up the earlier Pappaceras issue. Now the nesting is more in accord with consensus with regard to the indricotheres, but they’re still closer to 3-toed horses than to 3-toed rhinos.

Also note:
the <50 Bootstrap scores surrounding Hyracotherum, a basal horse/rhino. I could only separate sister taxa by 2 steps. It takes at least 3 steps to bounce the Boostrap score over 50. Small steps. Small steps.

This one everyone agrees on.
Cainotherium nests at the base of included artiodactyls in the large reptile tree (LRT).

Fig. 1. Cainotherium nests at the base of the Artiodactyla or even-toed ungulates. I wonder if it had five fingers, even if vestiges, given that Ancodus, a derived artiodactyl, retains five fingers.

Cainotherium renggeri (Bravard 1828, 1835; 30cm in length; Eocene to Early Miocene) was and is considered a rabbit-sized artiodactyl not far from the odd-toed ungulates, like the similarly-sharp-clawed Chalicotherium.

Note that a derived artiodactyl, Ancodus (Fig. 2) had five fingers, so one wonders if Cainotherium likewise had five.

Figure 1. Ancodus nests as a more derived sister to Sus and it retains digit 1 on the manus and pes.