Several years ago
the top vertebrate paleontologists in the world (Brusatte et al. 2010) reported on the origin of dinosaurs. Coincidentally Langer et al. (2010) wrote a similar report.  It is now 6 years later. Let’s see how well those report have held up as they compare to the current data (2016) in the large reptile tree.

From the Brusatte et al. introduction
“During the past 25 years, numerous new fossils, reinterpretations of long-forgotten specimens, and numerical analyses have significantly revised our understanding of this major macroevolutionary event, which is one of the most profound and important evolutionary radiations in the history of life.”

What has stood the test of time:

What has not stood the test of time: 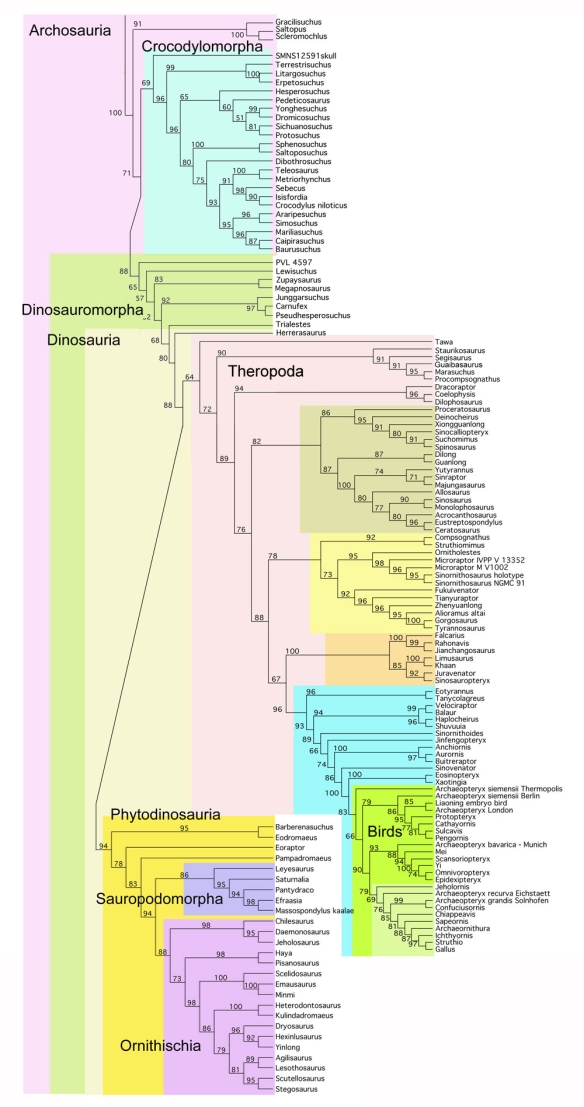 Staurikosaurus
Langer et al. (2010) mentioned Staurikosaurus (Colbert 1970) as the first consensual early dinosaur to be collected. Here it nests as a basal theropod, basal to a clade of theropods that is often overlooked that includes Marasuchus, Procompsognathus and Segisaurus. Yes, Staurikosaurus has but two sacral vertebrae. So do other clade members.

Guaibasaurus
Langer et al. (2010) also mentioned Guaibasaurus (Bonaparte et al., 1999) who reported, “The mesotarsal condition and the outline of the distal section of tibia indicate the saurischian nature of this new form, but the almost unreduced medial wall of the acetabular portion of ilium shows an unrecorded primitive condition within the cited group. Several features suggesting affinities with both the Prosauropoda and Theropoda, imply that Guaibasaurus candelariensis may belong to the ancestral group for both of them.” The large reptile tree nests Guaibasaurus as a basal theropod and as the sister to Marasuchus + Procompsognathus, not far from Staurikosaurus.

The Novas (1992) dinosaur definition
According to Langer et al., Novas (1992b) provided the first phylogenetic definition of Dinosauria as ‘‘the common ancestor of Herrerasauridae and Saurischia + Ornithischia, and all of its descendants’’. The addition of herrerasaurs does not change the current tree (Fig. 1). Padian & May (1993) explicitly restricted the use of Dinosauria to the clade composed of Saurischia and Ornithischia, exclusive of ‘‘Herrerasaurus and its allies’’. But Novas has priority. Moreover, the last common ancestor of Saurischia and Ornithischia is currently a herrerasaur. The diagnosis of the Dinosauria has seen some changes over the years. Many are traits that are not covered by the large reptile tree. Please check out the references below for lists and histories of those lists.

What does the large reptile tree diagnose dinosaurs?
The following suite of traits are found in basal dinosaurs and not their proximal outgroups, Trialestes, the Pseudhesperosuchus clade. However many of these traits are found elsewhere on the tree. And many traits are lost in more derived dinos.

Bipedality
has long been touted as a key dinosaurian trait, but dinosaurs evolved from basal bipedal crocodylomorphs, like Gracilisuchus and Scleromochlus. Interesting that Scleromochlus has been often associated with unrelated pterosaurs. Pterosaur removal sets things a little straighter in the retelling of the dinosaur ancestry story. Scleromochlus has not often been touted as a dinosaur ancestor, but by virtue of its false association with pterosaurs in various cladograms, it has always been there.

Then if wanted to
you could simply list all the traits of Herrerasaurus, the basalmost dinosaur, knowing full well that Herrerasaurus itself is derived from the first, as yet undiscovered, dinosaurs.

According to Wikipedia
on the topic of its name, “It was formerly called Syntarsus, but that name was already taken by a beetle, and was subsequently given the name Megapnosaurus by Ivie, Ślipiński & Węgrzynowicz, in 2001, though many subsequent studies have classified it in the genus Coelophysis.”

According to Wikipedia
on the topic of Coelophysis rhodesiensis, “Syntarsus” rhodesiensis was first described by Raath (1969) and assigned to Podokesauridae.[6] The taxon “Podokesauridae”, was abandoned since its type specimen was destroyed in a fire and can no longer be compared to new finds. Over the years paleontologists assigned this genus to Ceratosauridae (Welles, 1984), Procompsognathidae (Parrish and Carpenter, 1986) and Ceratosauria (Gauthier, 1986). Most recently, is has been assigned to Coelophysidae by Tykoski and Rowe (2004), Ezcurra and Novas (2007) and Ezcurra (2007), which is the current scientific consensus.”

Figure 2. The palates of Coelophyis and Megapnosaurus (illustrated by Cope 1989) together with the palates of Lewisuchus and Pseudhesperosuchus in phylogenetic order based on the large reptile tree. Note the gradual evolution of the elements here and the certainty that Megapnosaurus is not congeneric with Coelophysis. The palates of Lewisuchus and Pseudhesperosuchus are evidently only partially preserved. These line drawings are the only data currently available here.

Colbert (1989) illustrated the two palates together
of Coelophysis and Megapnosaurus (Fig. 2) and they sure do not look alike. I wondered about this discrepancy in two supposedly close sister taxa. I finally found a solution when I added Megapnosaurus and Zupaysaurus to the large reptile tree. They both nested between the basal proto-dinosaur Lewisuchus and the clade of basal pro to-dinosaurs that includes Pseudhesperosuchus.

Note in the palates gradual evolution in
the coming together and fusion of the vomers, the development of the anterior and posterior embayments of the palatine, the enlargement of the cheek articulation of the ectopterygoid and the anterior angle of the transverse process of the pterygoid, among other evolutionary advances here, along with individual variations.

Megapnosaurus rhodesiensis (kayentakatae) (Raath 1969, renamed by Ivie, Ślipiński & Węgrzynowicz, in 2001, Fig. 3, early Jurassic, 3m length) 30 individuals were found in a fossil bed. According to Wikipedia, “Over the years paleontologists assigned this genus to Ceratosauridae (Welles, 1984), Procompsognathidae (Parrish and Carpenter, 1986) and Ceratosauria (Gauthier, 1986). Most recently, is has been assigned to Coelophysidae by Tykoski and Rowe (2004), Ezcurra and Novas (2007) and Ezcurra (2007), which is the current scientific consensus.”

This is what happens with taxon exclusion.

Zupaysaurus rougirez (Arcucci and Coria 2003, Latest Triassic to Earliest Jurassic,  PULR-076, up to 4m long, 45cm skull length, Fig. 4) nests as a late-surviving pre-dinosaur (dinosauromorph) with Megapnosaurus between Lewisuchus and the Pseudhesperosuchus clade. Everyone else considers it a theropod, but my guess is they have not tested against these candidate taxa. Traditional paleontologists are still stuck on Lagerpeton. Here are the verified dinosaur precursors to scale (Fig. 5).

And here’s the skull of Coelophysis for comparison (Fig. 6).

Down 2000 compared Coelophysis bauri with Syntarsus rhodesiensis
and concluded that both were “remarkably similar morphologically.” He reported, “Although I have not been able to personally study fossils of Syntarsus rhodesiensis, I am confidant that, except for possible mis-articulation of the skull roof, the drawings prepared for Raath’s dissertation accurately represent this taxon. Raath’s illustrations, in almost every case, depict the Ghost Ranch theropod Coelophysis bauri more exactly than do the drawings and descriptions in Colbert’s (1989) monograph (which I glean data from). C. bauri and S. rhodesiensis…differ only in minor details such as neck length, proximal and distal hind limb proportions and proximal caudal anatomy. These differences do not justify a generic separation. The genus Coelophysis has priority over the genus Syntarsus.”

Take a look for yourself
at figures 3 and 6. They appear to be distinct to my eye. What do you think? Note that Downs does not mention the distinct palate. I’d like to see more postcranial data on Megapnosaurus. It’s out there. If you have it, send it. A shorter neck than in Coelophysis is to be expected if Megapnosaurus is a sister to Lewisuchus. There is no indication that Downs compared his taxa to Lewisuchus or the Pseudhesperosuchus clade, nor is there any indication of phylogenetic analysis.

Dr. Sterling Nesbitt (2011) recently published his chronological family tree of archosaurs and their ancestors (Fig. 1). It’s too small to read, so please click on it to enlarge it.

Figure 1. Click to enlarge. The family tree of Archosaurs and their ancestors by Sterling Nesbitt, who includes pterosaurs, phytosaurs, and proterochampsids (including lagerpetids) that do not belong here according to the large reptile tree of Peters.

Taking the same chronological data, I rearranged and edited the taxa according to the results of the large reptile tree (Fig. 2).

Figure 2. Click to enlarge. The family tree of Archosaurs and their ancestors according to the large reptile tree by Peters. Note the absence here of phytosauria, proterochampsia (including lagerpetidae) and pterosauromorpha all of which nest far afield in the large reptile tree. A few taxa are added here. As in Nesbitt’s tree, the major radiation occurred during the early Triassic and rather quickly. Here most dinosaur groups had a long ghost lineage into the Early Triassic, except, possibly, the Ornithischia evolving from Daemonosaurus

The evolution of dinosaurs and their ancestors is an intriguing question made more puzzling by the early appearance of Lotosaurus and Asilisaurus, two highly derived forms appearing in the early Middle Triassic, much sooner than the rest of the known fossils.

The question of poposaur nesting is the big difference here. Nesbitt finds that Ticinosuchus is basal to poposaurids. The large reptile tree found that Ticinosuchus was basal to aetosaurs and Sacisaurus was basal to poposaurids, despite its late appearance in the fossil record. The addition of Daemonosaurus (Fig. 2) provides a short path toward the Ornithischia. Nesbitt (Fig. 1) has a much longer path to the Ornithischia, close to Pisanosaurus, but running to the Early Triassic.

Poposaurids have been described as extremely convergent with dinosaurs, but their croc-like ankle gives them away. The large reptile tree found the development of a croc-like ankle was convergent in crocs and poposaurids, both developing from ankles without a calcaneal tuber or much of one.

The clade of Eoraptor, Panphagia and Pampadromaeus turns out to be the clade from which all phytodinosaurs (sauropodomorphs, ornithischians and poposaurids) evolved.