From the abstract:
“With a bird-like head, mole-like arms, and a “claw” at the end of the tail, derived drepanosaurs (lizard-sized neodiapsids) are highly enigmatic.”

Not so. The large reptile tree (LRT, 1594 taxa, subset Fig. 2) documents exactly what they are. Paleontologists should stop using the word ‘enigmatic’ when what they really are saying is ‘we haven’t put in the effort.’ And that means the very little effort needed to click on www.ReptileEvolution.com where all candidates for drepanosaur ancestry are considered and tested.

Always good to have, but 2D specimens are still diagnostic, like a photo, rather than a sculpture. You don’t need as many characters as possible to make a taxonomic determination. What you need is a surfeit of taxa.

Figure 1. Drepanosaurs and their ancestor sisters, Jesairosaurus and Palaegama to scale. Drepanosaurs nest at the base of the Lepidoauria. Pink bone is a sesamoid, not an ulna.

The rest of the abstract
describes the drepanosaur as a scratch-digger with an elongate naris and a hook tail capable of striking a tripod pose. They do not consider the ancestry or clade to which drepanosaurs belong, but consider them common and worldwide in distribution during the Late Triassic.

Figure 1. Subset of the LRT focusing on the Lepidosauria. Now the drepanosaur clade lumps with the rhynchocephalians in the crown group. Extant lepidosaurs are in gray.

The title of this abstract
may be the longest one I have ever read. See below.

Figure 1. Subset of the LRT focusing on the rabbit/rodent and kin clade where gophers nest with hedgehogs. 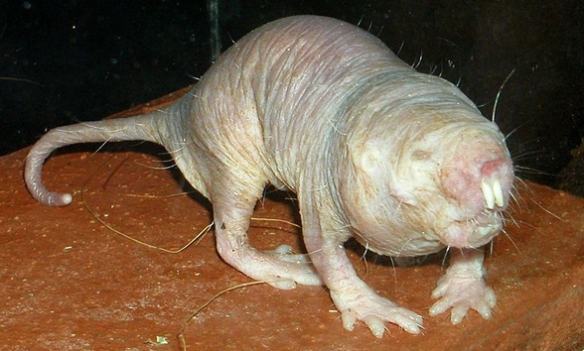 Figure 2. The naked mole rat, Heterocephalus is closer to hedgehogs than to rats.

Heterocephalus glaber (Rüppell 1842-5; 8-10cm) is the extant naked mole rat. It has a cold-blooded metabolism, lives underground, and can move backwards as fast as forward. Not the claws, but the teeth (protruding outside the lips) are used for digging. Heterocephalus is essentially hairless, lives in a colony dominated by a queen and may live up to 32 years in a low oxygen environment, or several times longer than related taxa. 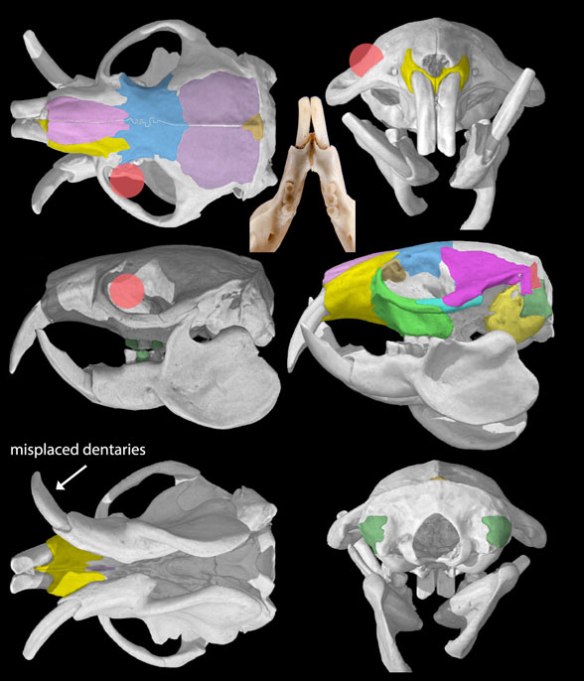 Figure 2. Naked mole rat (Heterocephalus) skull in several view. The mandibles are disarticulated here, but the glenoid appears to be reduced to absent, providing great mobility to the jaws.

Ceratogaulus hatcheri is the extinct horned gopher (Fig. 3). It nests with the naked mole rat in the LRT (Fig. 1).

Thomomys bottae (Figs. 4, 5) is the extant pocket gopher, another rodent nesting with hedgehogs.

These taxa look like rodents
but they nest with hedgehogs. So do we expand our concept of rodents (lumping)? Or make new clades (splitting)?

Rodentia is characterized by a single pair of continuously growing incisors in each of the jaws, as opposed to rabbits, which have two incisors.

Glires (Latin glīrēs, dormice) is a clade consisting of rodents and lagomorphs (rabbits, hares, and pikas). In the LRT many more clades of small mammals nest with rabbits and rodents.

Euarchontoglires (synonymous with Supraprimates) is a clade of mammals, the living members of which belong to one of the five following groups: rodents, lagomorphs, treeshrews, colugos and primates. In the LRT rodents nest with primates, but not colugos.

We don’t talk about mammals much,
but as reptiles they (we) do qualify as subjects to be covered by ReptileEvolution.com.

A new online study by Wu et al. (2012) finds evidence for a post-Cretaceous origin for rodents. Rodents (everything from porcupines and guinea pigs to squirrels, mice and multituberculates) are related to rabbits (lagomorphs).

The Wu et al 2012 study on rodents and their post-Cretaceous appearance.

How are they all related?
Near (but not at) the base of the primates is an interesting set of taxa known as tree shrews, like Tupaia (Raffles 1821, Fig. 1). Essentially they are basal rodents/rabbits/multituberculates.

Figure 1. Tupaia, the large tree shrew, a living taxon close to the base of rabbits and rodents with origins in the Paleocene, just following the Cretaceous. Click to learn more.

The most common tree shrew, Tupaia was found to be basal to the equally arboreal and highly derived Plesiadapis (Fig. 3) and terrestrial rabbits, and rodents, like the porcupine. It’s worthwhile to see the porcupine skull and how close it resembles that of Plesiadapis.

The other arboreal tree shrew,
Ptilocercus, is basal to Tupaia, derived from basal primates and carnivores. 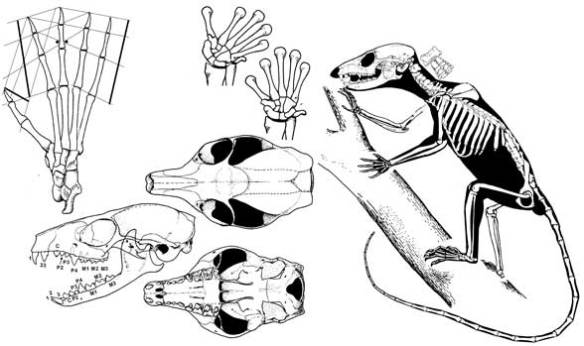 Figure 2. Ptilocercus, pen-tailed tree shrew, a living relative to the ancestor of bats and colugos.

Based on the nesting of multituberculates
all these tree shrews, rodents and rabbits had their origin in the Jurassic, not the Paleocene (contra Wu et al. 2012.

While we know of bipedal and quadrupedal pterosaur tracks left in soft mud and sand, we will never have traces of pterosaurs clinging to trees. Nevertheless, certain pterosaurs have provided clues that they did so, or could have done so, while others could not.

Figure 1. From left to right the pterosaurs MPUM 6009, Dorygnathus, Pterodaustro and Nyctosaurus, all to the same relative metacarpus length demonstrating the relative size of the free fingers. Those with larger free fingers were more adapted to cling to trees.

Tree Clinging in Pterosaurs
Tree clinging goes back to Longisquama, Cosesaurus and perhaps even Huehuecuetzpalli and Lacertulus, basal tritosaur lizards that had tendril-like hind toes, like a modern Iguana. Unlike Iguana, Huehuecuetzpalli and Lacertulus had relatively smaller hands, fingers and finger claws. A quick look at the modern glider, Draco, can be instructive on this point. Giant claws may not be necessary, but long tendril-like fingers seem to help.

The pterosaur ancestor Longisquama had relatively enormous fingers tipped with trenchant claws and a bipedal body plan. So it clung to trees in a different fashion than a typical lizard — and more like a telephone lineman (or a lemur) with feet planted beneath the hips, the belly elevated off the trunk, the arms extended and the fingers wrapped around the trunk, claws dug in. Finger 4 was rotated axially and posteriorly at the carpus. Despite its great length, finger 4 was no longer involved with tree clinging, as demonstrated by the discontinuous PILs (described here).

Like their Lizard Forebearers
Early pterosaurs, like MPUM 6009 (Fig. 1) and Dorygnathus (Fig. 1) had relatively long fingers tipped with trenchant, bark-stabbing claws.  Primitively their metacarpals and fingers increased in length from 1 to 4. In Dorygnathus metacarpal 2 and 3 were subequal.

Derived Pterosaur Hands
In certain later pterosaurs the metacarpals would appear in different proportions.  Pterodaustro (Fig. 1) had relatively tiny fingers on metacarpals in which mc 1 was longer than mc2, which was longer than mc3. Digit 2 was subequal to 3 and no manual ungual was deeper than its penultimate phalanx.

A series of Nyctosaurus specimens demonstrate the reduction of all three fingers in that genus, culminating in the UNSM93000 specimen which had useless wire-like vestiges.

Needlessly Controversial
In the present supposedly “heretical” configuration the forearm was unable to pronate or supinate, thus the palmar side of the fingers faced ventrally in flight and medially with wings folded (Peters 2002). This controversy was blogged about earlier. The key here is the palmar sides of the fingers facing medially with wings folded so pterosaurs could grapple parasagittal tree trunks between their opposing hands, much like the early bird, Archaeopteryx, which had similarly elongated fingers and a forearm similarly unable to pronate and supinate. Other scientists proposed finger configurations that were permanently supinated (i.e. Bennett 2008), but these did not allow tree clinging.

Questions
Azhdarchids, even large ones, had robust fingers with deep claws. Were they found in trees? Or only on the ground?

Jeholopterus had extremely long, curved hand claws, built like surgeon’s needles. These look to be ideal for stabbing and clinging to dinosaur hide. Were these clues to its vampire lifestyle?

References
Bennett SC 2008. Morphological evolution of the forelimb of pterosaurs: myology and function. Pp. 127–141 in E Buffetaut and DWE Hone eds., Flugsaurier: pterosaur papers in honour of Peter Wellnhofer. Zitteliana, B28.
Peters D 2002. A New Model for the Evolution of the Pterosaur Wing – with a twist. – Historical Biology 15: 277–301.

Some of the strangest, most Dr. Seussian reptiles of all time were the Late Triassic drepanosauromorphs: Hypuronector, Vallesaurus, Drepanosaurus and Megalancosaurus. Found world wide and described as chameleon-like due to their unique grasping feet, drepanosaurs almost always provide something special to gawk at, including a hooked tail tip. Due to their strangeness, drepanosaurs have been difficult to classify.

Prior Assignments
Although Drepanosaurus was first considered a lepidosaur, drepanosaurs have been difficult to nest because they have rarely been part of a large, comprehensive taxonomic inclusion set.  Prior studies mistakenly nested drepanosaurs with Coelurosauravus and Longisquama (Senter 2004), which are not related to each other. Renesto and Binelli (2004) found that the pterosaur, Eudimorphodon, nested with drepanosaurs, between archosauriforms and Prolacerta + Tanystropheidae (Tanystropheus + Macrocnemus + Langobardisaurus) which is pretty close. Unfortunately, no one attempted to include basal lizards, including Huehuecuetzpalli and Jesairosaurus, in prior studies.

Current Assignment
Here drepanosaurs were lizards and members of the previously overlooked third clade, the Tritosauria with Huehuecuetzpalli, Meyasaurus and Jesairosaurus at its base. These lizards did not fuse the astragalus and calcaneum like other lizards did and do.  Cosesaurus, Macrocnemus and several other strange tritosaurs are sister taxa.

Jesairosaurus
Jesairosaurus was the first in this line to develop the higher dorsal spines over the fully erect and fully ossified scapula, perhaps most immediately comparable to that of Meyasaurus. The skull was relatively larger and may have had a slender antorbital fenestra, taller than wide. The neck was relatively longer and quite gracile. One can surmise that this was the first of the slow-moving types due to the lack of robust bones in the neck. The hind foot is unknown but probably did not have the great asymmetry of Huehuecuetzpalli, but the shorter toes of Hypuronector. The tail is also unknown.

Vallesaurus
The most primitive drepanosaur with a curled tail was Vallesaurus  (Wild 1990, Renesto and Binelli 2006). The naris and antorbital fenestra were much larger on a shorter rostrum. The tail chevrons were not so deep and the posterior tail was curled ventrally, likely a prehensile organ able to grasp branches. Pedal digit 1 was greatly enlarged, like a thumb and may have opposed the other four digits while grasping branches. The proximal ankle bones were fused.

Megalancosaurus
Originally considered a possible bird ancestor, when only the skull and neck were known, Megalancosaurus (Calvazara, Muscio and Wild 1980) had a curled tail tipped by a hook. The antorbital fenestra was smaller, the narrow snout enabled binocular vision, the neck was longer, the shoulder hump was larger, the torso and tail were deeper, the scapula was more slender, the ilium leaned anteriorly and the pedal digit 1 was smaller but still robust.

Drepanosaurus
The first drepanosaur to be described was Drepanosaurus (Pinna 1980), which was originally and correctly considered a lizard. Renesto (1994) figured out that the ulnare enlarged, replacing the ulna, and the ulna became a sort of an elbow bone. These changes were related to the hyper-enlargement of manual ungual 2, which could have been used for digging or slicing into bark, perhaps to extricate buried insects. Larger than the other drepanosaurs, headless drepanosaurus also had the shortest neck and deepest torso. The pedal “thumb” was as large as the longest digit, #2.

No drepanosaurs are known to have survived into the Jurassic.

Summary
The drepanosaurs were an arboreal clade of tritosaur lizards adapted to slow-motion, clinging to branches with four short-toed, grasping feet and a prehensile tail. Later forms either lurched out at prey with a cobra-like neck snap and binocular vision, or dug into branches with outsized claws.