Flugsaurier 2018 part 4
Since the purpose of the symposium is increase understanding of pterosaurs, I hope this small contribution helps.

Habib and Pittman 2018
bring us a rarely studied Berlin pterosaur, MB.R.3531 (Fig. 1) originally named Pterodactylus micronyx, then Aurorazhdarcho micronyx. This specimen nests with other wading pterosaurs, Aurorazhdarcho, Eopteranodon and Eoazhdarcho forming  a clade overlooked by other workers, at the transition between germanodactylids and pteranodontids, not related to azhdarchids.

But phylogeny is not what interests Habib and Pittman.
They report, “We provide the description of an exceptionally well-preserved specimen of a juvenile aurorazhdarchid from the Jurassic of Germany which preserves details of the wing membrane and pedal webbing and use it to address mechanical questions regarding launch from water in small pterosaurs.” We can’t be sure it’s a juvenile because pterosaur juveniles are isometric copies of their parents and phylogenetic miniaturization often attends the genesis of new pterosaur clades.

This is a wading pterosaur, part of a clade of long-legged wading pterosaurs. It has webbed feet for wading, not for swimming. Wading birds don’t go in water deeper than they can wade in and they take to the air by flapping their wings and leaping. The MB.R. specimen was originally mistaken for Pterodactylus because it greatly resembled Pterodactylus, another clade of small to medium-sized waders leaving numerous webbed tracks. Also back then they had fewer pterosaurs to compare, other than Pterodactylus.

Habib and Pittman don’t buy into the lepidosaur origin of pterosaurs.
They report, “The latest range of motion estimates for the pterosaur hind limb (Manafzadeh and Padian, 2018) suggest that the hind limbs in pterosaurs had more limited abduction than previously modeled and that the hindlimbs operated primarily in a vertical plane.” We invalidated that claim earlier using phylogeny (pterosaurs are more closely related to squamates than to birds). Dozens of pterosaur fossils show the hind limbs spread and form horizontal stabilizers during flight (Fig. 3). That’s when the webbed feet become useful, as twin vertical stabilizers. Webbed feet are primitive for pterosaurs and are found in pterosaur outgroups, like Sharovipteryx.

Figure 3. Click to animate. The Vienna specimen of Pterodactylus (wings folded). Animation opens the wings and legs to reveal the true shape of pterosaur wings, stretched between the elbow and wingtip with a short fuselage fillet extending from elbow to mid femur. The feet act like vertical stabilizers.

Habib and Pittman insist
“We estimate that MB.R.3531 was capable of taking off from the water surface with a single escape push (under the most liberal model values) or with 1-2 follow-up bounding phases (under the most conservative model values), with the majority of the takeoff energy expended on the initial escape phase. The added propulsive area of the pedal webbing had a notable effect on the overall launch performance, increasing estimated propulsive accelerations by over 20% and reducing the number of required propulsive bounding phases.” There’s no need for bounding for floating pterosaurs. They can simply stretch out and flap their wings like pelicans do (Fig. 4) while they frantically kick their feet. In any case, the MB.R. specimen is a wader, so the problem is moot. We looked at water-launch problems in pterosaurs earlier here, here and here.

Habib and Pittman conclude:
“The exact values and kinematic results should be taken with caution, given the large number of values that had to be broadly estimated or assumed.” One wonders why these authors don’t just let their hypothesis drop in favor of one that employs the more than adequate thrust generating power of pterosaur wings together with frantically paddling feet.

With a nod to Mike Habib, there are (at least) three tetrapods that can walk on water, each in their own way.

1. The famous Basilisk, otherwise known as the Jesus Christ lizard. 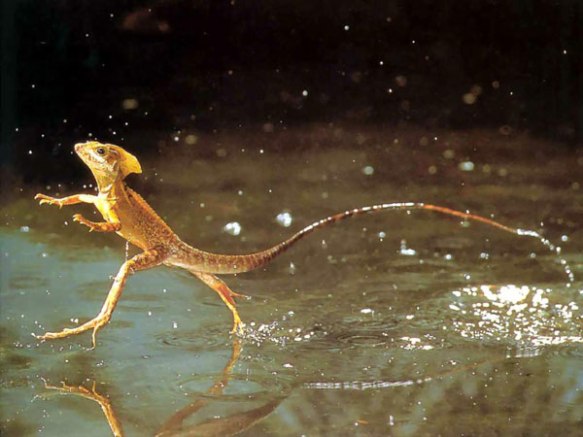 2. The Stormy Petrel, which actually just flies or glides (with a nice headwind) so close to the water that it dips its toes in.

Figure 2. Click to see video. Stormy Petrels gliding into a headwind, dipping their toes in the water while feeding.

3. The western Grebe, which, like the basilisk, actually gets up and runs on water (Fig. 3). Looks strenuous. Ends in a cool dip. Hope these guys get lucky because it is a mating ritual designed to show their skills. The wings are semi deployed and do not provide lift during this excursion, but this is not a flightless bird.

Another video of grebes from the BBS here.

Using the same technique (rapid leg movements) here is another video of yet another grebe ritual, performed belly to belly, largely out of the water.

These odd birds also have an unusual way of walking on the beach seen here in video (Fig. 4).

Figure 4. Grebe walking. A little ungainly, seems to tire easily as it plops down on its belly. Click to see video. Note the toes are beneath the center of balance in this flying animal, the root of the wings.

Western Grebes, like Jesus lizards, move their feet incredibly rapidly to remain above the water. I haven’t seen such rapid foot movements in large birds that actually takeoff from the water. I have searched for video of grebes taking off to no avail.

Addendum: January 4
Here is a video of the largest bird that can fly, the Kori bustard. The thing you may not be able to see unless you stop and start the video several times is the frantic kicking of the hindlimbs during the strenuous high angle take-off and acceleration to normal flight speed. It is reminiscent of the toe touches we’ve already seen pelicans do during takeoff, but there’s no water around. It’s just residual frantic leg movements timed with wing beats. So, is the pelican gaining speed with every toe touch on the water, or is it just more of the same frantic leg movement before the “landing gear” are finally stowed away at cruising speed?

Finally, an image of a duck spanking the water on its first downstroke (Fig. 5) and using the recoil to propel it into the sky. I’m sure the feet are also moving like crazy, but are they moving together, as in a leap, or are they running? It happens so fast, it’s all a blur.

Figure 5. Duck take off as it spanks the water on the first downstroke (evidently the feet did not cause it to leap free from the water). Click to see video. Takeoff is at the very end.

All of these are instructive with regard to pterosaurs and their ability to take off from a floating configuration.

The grebe shows that an apparently top-heavy tetrapod can still get about on two legs and take-off from the water.

The duck shows that laterally extended wings can spank the water and contribute to a quick take-off.

The petrel shows that a headwind can provide enough airspeed to achieve flight at a very low to no groundspeed.

The basilisk shows a non-webbed foot moving rapidly in a sprawling configuration can achieve no-wind takeoff speeds. Pterosaurs had webs. All of these expand the possibilities for pterosaurs.

We’ll be taking a look at pterosaur thighs in the near future. [Rated P-G. ]