Two large, disassociated,
but strongly similar Solnhofen pterosaur wings, SMNK 6990 (Fig. 1) and MB.R.559.1 (Fig. 2) were described in detail by Elgin and Hone 2020. Unfortunately they did so without a phylogenetic analysis and therefore presented no firm hypothesis of interrelationships.

Figure 1. The SMNK 6990 wing from Elgin and Hone 2020. Contrast was raised from the original photo. Metacarpal 1 is actually mc3. Reconstruction in figure 3.

In the MBR.5991.1 specimen
Elgin and Hone 2020 overlooked the three free fingers.

Figure 2. MB.R.5991.1 specimen as originally published, then a higher contrast image and color tracing including three overlooked free fingers and a radius.

In their conclusion,
Elgin and Hone first guessed, then gave up trying to figure out what sort of wings these were when they reported, “a placement within either the Ctenochasmatoidea or Dsungaripteridae appears most likely… further differentiation is impossible.” 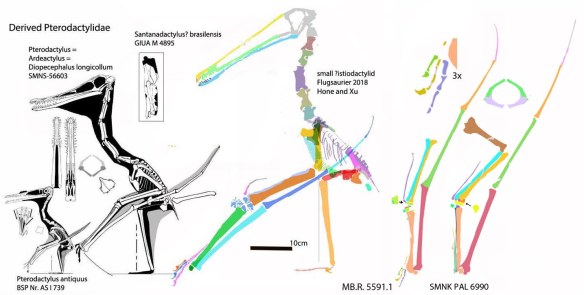 In counterpoint,
testing against all 242 taxa already in the large pterosaur tree (LPT, where nothing is impossible) both new Solnhofen wing specimens nested with the largest pterodactylids, including, ironically, Luchibang (Fig. 3), which just this month Dr. Hone mistook for an ornithocheirid with weird proportions.

Alas, and with regret,
these two authors have a long history of making similar mistakes and overlooking details despite having firsthand access. Those low batting averages were covered earlier here, here, here, here, here and here. Not sure why referees keep accepting such work for publication. In the end it just has to be cleaned up.

Contra the authors’ title,
the traditional clade ‘Pterodactyloidea’ becomes a grade with four convergent appearances, when more taxa are added. Traditional paleontologists have been loathe to do this in their own cladograms. This hypothesis of interrelationships has been in the literature for the last 13 years (Peters 2007) and online in the LPT for the last ten.

Keeping the blinders on
is what pterosaur workers seem to continue to be doing. The next generation of workers (Elgin and Hone among them) seems to be stuck in the same quagmire. Not sure why this is so. Astronomers and physicists are always testing each others’ observations and hypotheses. They are always inviting ideas. In the end, they seem to speak with one voice. Why can’t we be like that?