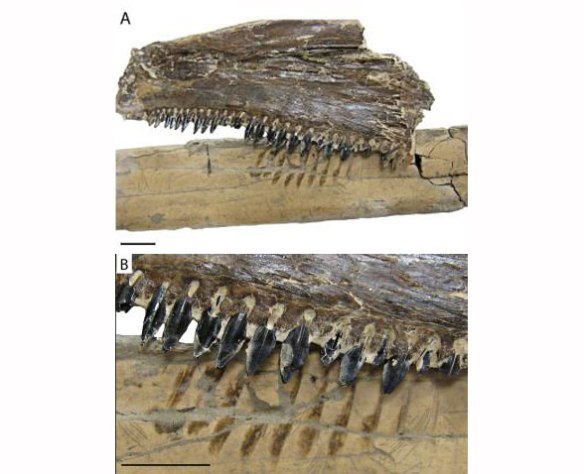 Ehret and Harrell 2018
bring us news from Alabama of two distinct sets of tooth marks on a Pteranodon (Fig. 2) metacarpal (Fig. 1). They report:

“The Pteranodon specimen exhibits serrated teeth marks on the surface of the bone and a second set of larger, unserrated teeth marks unlike those of any contemporary shark species. These feeding traces compare favorably with the tooth spacing and morphology of Squalicorax kaupi, and a small to moderate-sized saurodontid fish, such as Saurodon or Saurocephalus, respectively. In both instances, feeding traces appear to be scavenging events due to the lack of any healing or bone remodeling. The specimen represents a pterosaur that either fell into marine waters or was washed out from nearshore areas and then scavenged by both a chondrichthyan and osteichthyan.”

“Many fossils from late Cretaceous Alabama appear to have been nibbled by sharks, including sea turtles and dinosaurs, which are often ‘covered in predation marks,’ says Ehret.”

NatGeo publicized the find by talking to some pterosaur experts, “Pterosaurs actually had a lot of meat on their skeletons,” says Michael Habib, a pterosaur expert at the University of Southern California who was not involved with the latest find. “They were not the skinny animals often depicted in films and art. The flight muscles in particular would have made a great meal.”

Pterosaur metacarpals,
like all metacarpals, actually are sinewy and have little to no associated muscle.

Habib adds,
“Pteranodon also inhabited this coastal environment during the late Cretaceous, making a living snatching smaller fish from the shark-filled waters. Pterosaurs could float, but being less buoyant than birds, they probably didn’t sit on the surface for long. Some species, including Pteranodon, did likely plunge into the water for prey. “They could then quickly take back off from the surface. But these diving pterosaurs might have been vulnerable to sharks just after they entered the water,” he says.

M. Witton concluded,
“It’s nice to know what species were interacting in this way.”

Ehret corrected the pterosaur experts,
“It’s also possible that the animal died near the shore and was scavenged when it washed out to sea.”

Contra Habib’s statement
Pteranodon was at least as buoyant as a pelican. It has been widely known for over a century that pterosaur bones are thinner than bird bones and Pteranodon metacarpals, in particular, were hollow like pontoons (Fig. 2).

Ultimately
the bite marks represent curiosity, not predation, a point understood by Ehret and Harrell.

Recently Hone and Henderson (2013) conducted computational experiments with four digital pterosaur models (Fig. 1) and report, “we show that the floating posture of pterodactyloid pterosaurs led to the head, neck and body being horizontal with the ventral 1/4 to 1/3 being immersed, and the external nares being almost at, or potentially partially below, the waterline that could have left them vulnerable to drowning. These results suggest many did not regularly rest on the surface of the water and if immersed would need to take off again rapidly. The high numbers of fossils of juvenile pterosaurs compared to the terrestrial Mesozoic dinosaurs suggests that this may be linked to their poor ability in water.”

Obviously they thought they were professing pterosaur heresy, since so many illustrations from several sources imagine pterosaurs floating (Wellnhofer 1991, p.169; Lockley and Wright 2010, p. 73). According to Hone and Henderson (2013, Fig. 1), if pterosaurs floated at all, it was not too well and not for long.

They briefly mentioned traces of the pedal claws only, which were widely considered to be made by floating, paddling pterosaurs. They completely ignored all reports of manus only traces, like those here. Their colleague Mark Witton writes in pterosaur.net, “Wading behaviour may also be recorded: bizarre pterosaur trackways comprised of manus prints alone have been suggested to be created by pterosaurs wading in shallow water with buoyed-up hindquarters.” Manus only tracks were reported by Parker and Basley (1989), Lockley et al. (1995), Pascaul Arribas and Sanz Pérez (2000).

Here (Fig. 1) are models by Hone and Henderson for Rhamphorhynchus and Pteranodon, two taxa known to be fish eaters and therefore likely floaters. Note the effort needed to raise the skull out of the water in these stiff-neck models. Also note the too-slender forelimbs and too-slender thighs. Compare these to figures 2-5, based on bones.

Figure 1. Computational models of two pterosaurs from Hone and Henderson 2013. Note how both models have trouble keeping their nose out of the water, as they report. Neither of these models has a robust thigh typical of most pterosaurs. Also missing here in Rhamphorhynchus is a deep posterior abdomen caused by the deep prepubis.

Not considered here:
Hone and Henderson also modeled Dimorphodon, a basal pterosaur that likely was an insectivore, since all  sister taxa are also considered insect eaters. The Dimorphodon skull is a fragile wonder, so it was an unlikely fish-eater and therefore an unlikely candidate as a floater. Hone and Henderson also modeled Dsungaripterus, a stork-like wader. With such unique crushing teeth, it is not known what it preferred in its diet, but waders, like storks, are typically not floaters. I can’t find a single image of a floating stork on the Internet.

Mathematically manipulating their models, Hone and Henderson dialed up and dialed down various factors, such as density, placement of the lungs, etc. Reportedly, these did little to change the results of the apparently top-heavy, skull-leveraged pterosaurs.

The one thing they did not attempt
was to loosen the shoulder joints, which allows the pontoon-like forelimbs to float horizontally while the torso rotates between them. Their digital models also fail to accurately echo living tissue (described below and in later posts).

Figure 2. Floating pterosaurs from ReptileEvolution.com showing the large solid thighs, that counterbalance the air-filled skull. Like birds, the neck is able to raise the skull above the surface. Note how the forelimb pontoons are able to rotate, which elevates or depresses the torso. Ctenochasma (above) is ‘poling’ on its forelimbs, matching manus-only pterosaur tracks that were mentioned by Hone and Henderson, but can only be made by floating

Birds keep their wings out of the water. Bird wings are not flotation devices.

On the other hand,
pterosaurs come with their own rotating pontoons. So they can change the configuration of the body and the elevation of their skull relative to the water surface all sorts of ways, a point overlooked by Hone and Henderson’s static models. 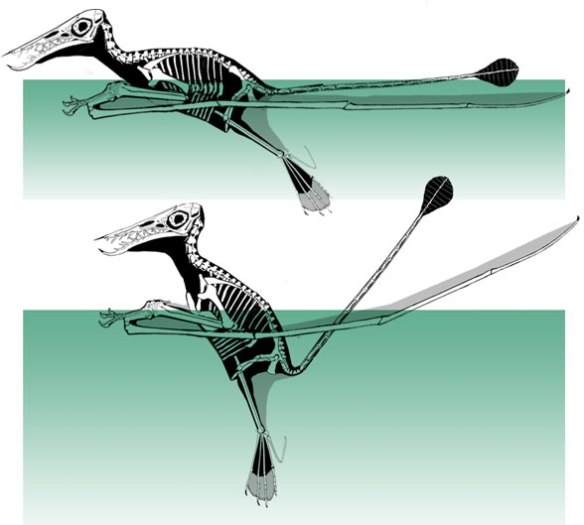 Figure 4. Two configurations for Rhamphorhynchus. Because the wings act like pontoons, the torso and skull can be rotated relative to the wings to adopt a variety of floating configurations. Also note the large webbed feet, preserved in the darkling specimen. The tail can be elevated at its base. Here the deep prepubis creates a deep abdominal keel not reflected in the Hone and Henderson digital model.

Imagine flocks of Rhamphorhychus enjoying the tidal pool like a bunch of kids with their “floaties” in a pool. Large webbed feet could have been used to paddle around or help launch this pterosaur by rocketing it out of the water along with several big wing flaps. We looked at this topic earlier here and here. 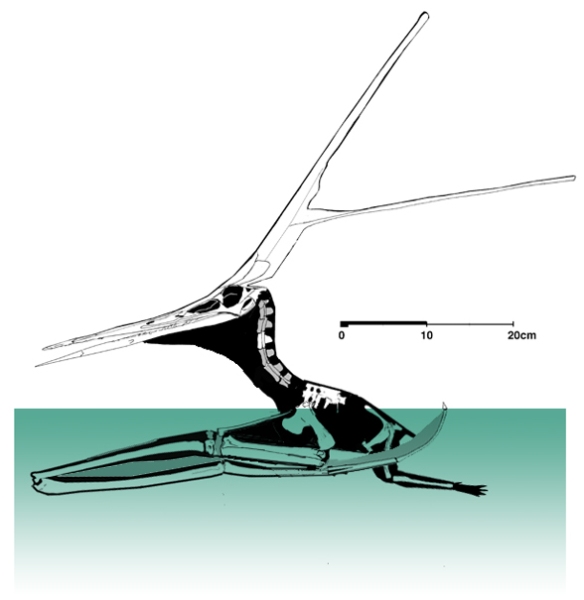 Figure 5. The derived Nyctosaurus, KJ2 in a floating configuration using its long forelimbs as pontoons.

Even the large crested Nyctosaurus can ride the waves with its “mast” over the center of gravity and the center of balance, the shoulder joint (Fig. 5).

Unfortunately,
this is one more error to add to their pile. First of all, the wing was much narrower than Hone and Henderson suppose. Then, when pterosaurs folded their narrow wings, the membranes folded down to almost nothing. This is shown in several fossils, but cannot happen if the wing has a deep chord and attaches to the thigh or ankle. Finally, if the wings had a water-shedding surface, like that of diving birds, or that little floating lizard (Fig. 6), then what little water was present, would fall off rapidly.

Figure 6. Images of floating lizards. The small one in the middle, like tiny pterosaurs, takes advantage of surface tension to ride high and dry while spread-eagle on the surface.

Tiny pterosaurs: not all juveniles
Seems Hone and Henderson are still stuck in the ptero dark ages thinking tiny pterosaurs were all juveniles. They’re not, according to phylogenetic analysis and the fact that pterosaurs matured isometrically. In any case, as the small lizard shows (Fig. 6), tiny pterosaurs were more likely to float than large ones, based on surface tension and their tiny mass. Tiny pterosaurs had more surface area than any nonviolent lizard. So they would have been great floaters. And…need I say it? Pterosaurs are lizards.

More on this tomorrow and the next day where we’ll match manus only tracks to trackmakers and take another look at digital models.