This post has been modified from its original content. It’s important to remember that pterosaurs are lizards. They follow lizard-type growth patterns as reported by Maisano 2002 in which some lizards fuse bones and keep growing while others never fuse certain bones into old age. Pterosaurs also grow isometrically, with long-snouted, small eyed embryos known.

Traditional thinking follows the paradigm
that the unfused scapulocoracoid (s/c) in pterosaurs demonstrates immaturity. I tested this in a phylogenetic analysis. Turns out the patterns are not ontogenetic, but clearly phylogenetic. Scapulocoracoid fusion is on again, off again in patterns that are not the random pattern one would expect if ontogenetic in nature. 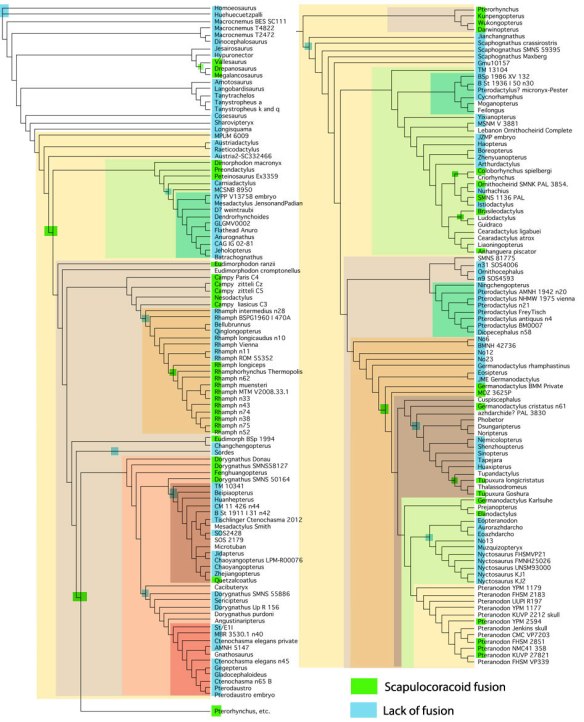 Figure 1. Click to enlarge. Pterosaur family tree (May 2013) highlighting scapulocoracoid fusion in pterosaurs (bright green) and lack of fusion (bright blue). Other taxa do not preserve the s/c. If ontogenetic we would expect a more scattered, randomized pattern. That’s not the case here as fusion patterns follow phylogeny, not maturity. Some taxa here do not preserve the scapula and coracoid. Not listed here, but related to Cearadactylus, Barbosania does not fuse the s/c. Some taxa have complete fusion. Others retain a line of fusion. Among the higher ornithocheiridae there is the greatest randomness in fusion.

Pterodaustro is known from embryos to fully mature individuals
Codornú et al. (2013) report on 300+ individual specimens from a single bone bed: “Interestingly, proxies for full skeletal maturation are thus far present only in isolated elements (i.e., all complete or semicomplete specimens belong to osteologically immature individuals). These proxies include the complete fusion (lack of any sutural evidence) between the extensor tendon process and the shaft of the first wing phalanx, the complete fusion between the tibia and the proximal tarsals, and the fused distal secondary ossification centers of the humerus.” Note they did not report fusion of the scapula and coracoid. That’s because Pterodaustro nests in a clade (Fig. 1) that does not fuse the scapulocoracoid.

So what’s the pattern?
Basal pterosaurs do not have a fused scapulocoracoid. Dimorphodon may have a fused s/c. Campyognathoides and basal Dorygnathus fuse the s/c. Basal Rhamphorhynchus specimens are smaller and lack fusion. Derived Rhamphorhynchus regain fusion. Dorygnathid pre-azhdarchids beginning with tiny TM 10341 lose fusion. Large azhdarchids regain fusion. No ctenochasmatid or dorygnathid pre-ctenochasmatid fuse the scapulocoracoid. Jianchangnathus and all subsequent scaphognathids lose fusion. Basal ornithocheirds, no matter how large their wings are do not fuse the s/c. Certain, but not all derived ornithocheirds regain fusion. On another branch of scaphognathids, certain germanodactylids regain fusion. Shenzhoupterids and basal tapejarids lose fusion. Derived tapejarids, the big ones, regain fusion. (Does anyone have a good dsungaripterid scapulocoracoid? I haven’t seen one yet.) Germanodactylids including Pteranodon have fusion (not sure about basal taxa because so many are known just by skulls), but eopteranodontids and nyctosaurs lack scapulocoracoid fusion.

A little pterosaur referred to Eudimorphodon, BsP 1994 has a fused s/c. Arthurdactylus a much larger, longer winged ornithocheirid, does nto fuse the s/c. So size is not the issue.

All known pterosaur embryos come from clades that do not fuse the scapulocoracoid. However, the  juvenile Pteranodon has a fused s/c.

Addendum
Once a clade began to fuse the s/c, then lack of fusion generally accompanied phylogenetic size reductions. Among azhdarchids, only Quetzalcoatlus fuses the s/c. This includes a smaller Pteranodon YPM2525 which may also represent a size reduction shown here.

Among the derived ornithocheirds you do get a more randomized on-off-on-off pattern.

So there you have it. All results subject to change with injections of new valid data.