Back when placental mammals were first diversifying in the Jurassic
they all looked like small arboreal marsupial didelophids, like Caluromys, and small arboreal placental tree shrews, like the extant Ptilocercus and Tupaia. Two distinct specimens, both given the genus name Hapalodectes (Fig. 1), are among these basal placental taxa in the large reptile tree (LRT, 1378 taxa).

The slightly smaller
IVPP V5235 specimen attributed to Hapalodectes (Ting and Li 1987) nests at the base of the primate clade. It had already taken on the appearance of a little basal lemur or adapid (Fig. 1). 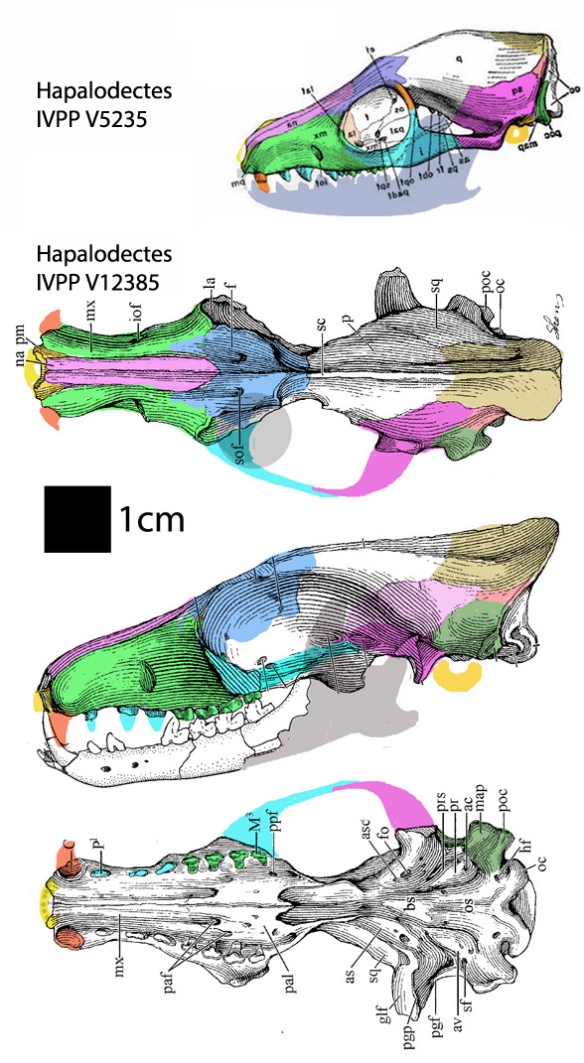 The slightly larger
IVPP V12385 specimen attributed to Hapalodectes (Ting et al. 2004; Fig. 1) nests at the base of the anagalid-tenrec-odontocete clade and it had already taken on the appearance of a little anagalid or elephant shrew.

Other than size, the differences are subtle:

Hapalodectes hetangensis (Ting and Li 1987; 4.5cm skull length; Paleocene, 55 mya; IVPP V 5235) This skull was originally wrongly applied to the Mesonychidae, but here nests at the base of the primates, including Notharctus.  Note the transverse premaxilla, the large canine, and the encircled orbits rotated anteriorly.

?Hapalodectes ?hetangensis (Ting et al. 2004; 7 cm skull length; Early Eocene 50 mya; IVPP V 12385) was originally considered a tiny mesonychid. This species nests at the base of the anagale-tenrec-odontocete clade, between Ptilocercus and Onychodectes. The large nuchal crest is a key trait found in later taxa. The premaxilla is largely missing, but likely was transverse in orientation. 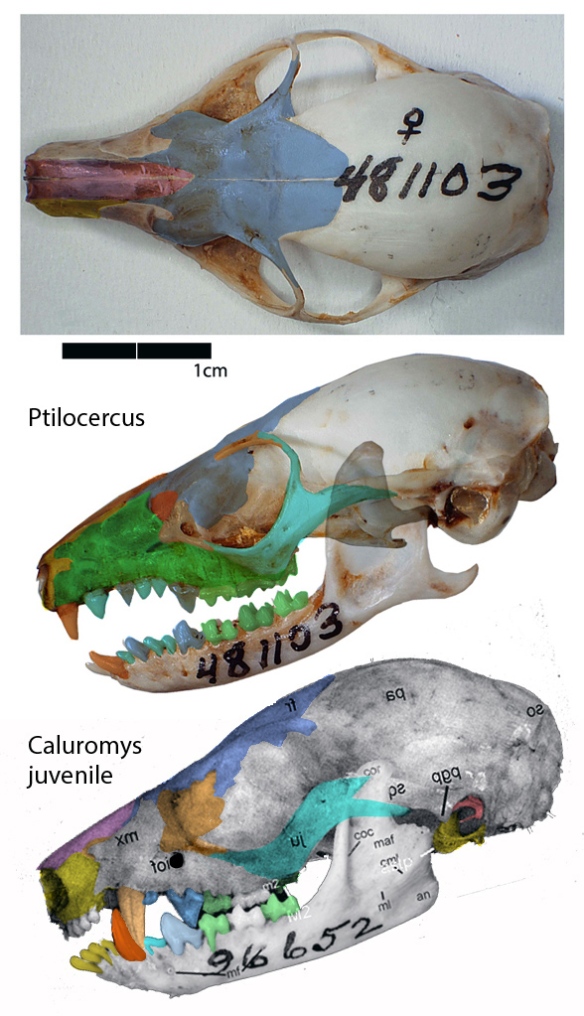 López-Torres and Fostowicz-Frelik seek to understand
the phylogenetic position of the Anagalidae, “an enigmatic and poorly studied group of primitive members of Euarchontoglires known from the Palaeogene of China.”

On the other hand
this clade is well understood in the large reptile tree (LRT, 1311 taxa, subset Fig. 3). The genus Anagale (Fig. 1) is basal to Andrewsarchus, tenrecs and odontocetes, taxa notably missing from traditional lists (see below). Taxon inclusion is the key to understanding this and all other tetrapod clades.

First of all, some traditional clade members:

None of these groupings
are recovered in the LRT (which is genus to specimen-based). 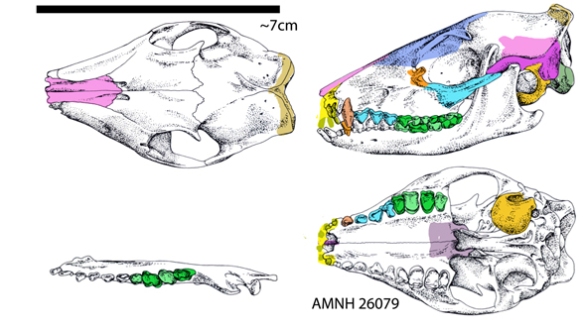 Figure 1. Anagale nests at the base of the tenrec – odontocete clade, not with rabbits, in the LRT.

All prior clade memberships suffer from taxon exclusion.
Anagale (Figs, 1, 2) itself nests at the base of the tenrec – odontocete clade (Fig. 2) a hypothesis first recovered in the LRT.

Where Anagale and kin nest in the LRT: 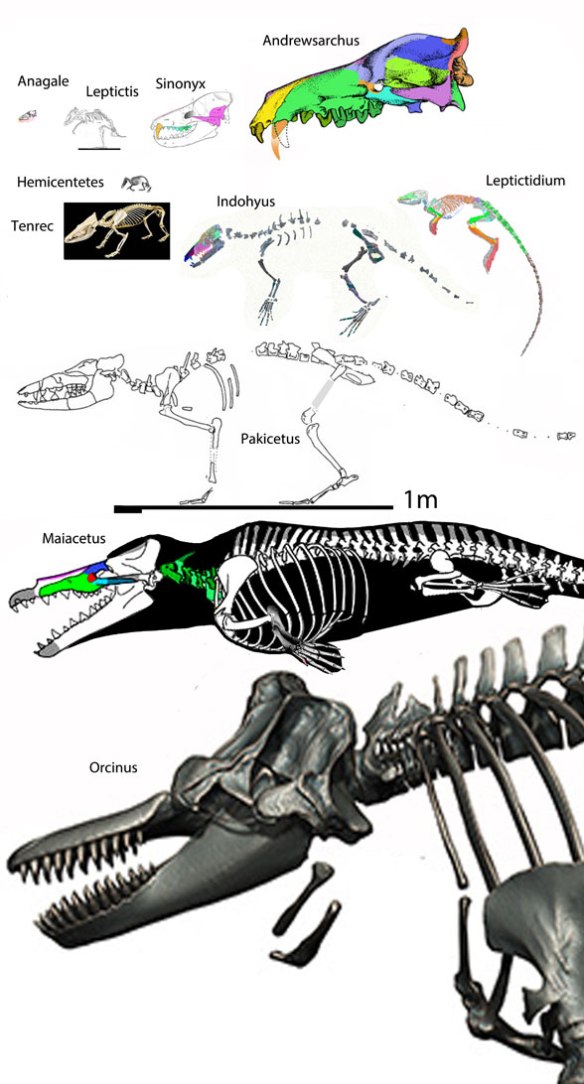 López-Torres and Fostowicz-Frelik 2018 report:
“Anagalids were originally suggested to be closely related to modern treeshrews, lagomorphs, some primitive eutherian groups such as zalambdalestids and pseudictopids, and Macroscelidae (within the broader concept of ‘Anagalida’), but that idea was later rejected, especially with growing evidence of molecular relationships among major mammalian clades and the generally accepted monophyly of Glires. Our study presents a new, more comprehensive phylogenetic analysis based on 190 dental characters.” 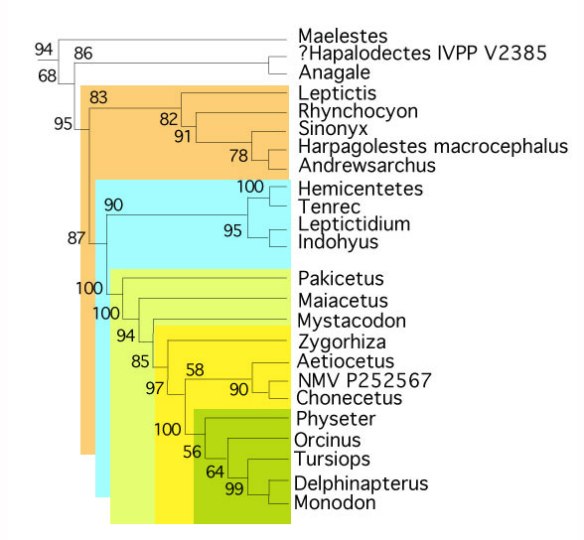 Figure 5. Subset of the LRT focusing on the tenrec/odontocete clade with several whales added.

Dental characters only???
Yikes. The authors continue: “The resulting strict consensus tree (based on 76 equally-parsimonious trees) disagrees with the previous conception of anagalid monophyly. Instead, anagalids are heavily paraphyletic, appearing as several offshoots at the base of Glires, which suggests that anagalids could be considered stem Glires.”

The LRT is nearly fully resolved and anagalids are not stem Glires.
They are the sisters to Glires. Add these relevant taxa (Fig. 2) and let us know if your tree recovers the same tree topology.

These authors need to expand their taxon and character lists.
Contra tradition, Anagale and kin have little to do with rodents or rabbits. Add taxa. Let the taxa nest where they want to. Don’t limit the taxon list. Soon this clade will be well understood, no longer an enigma.

References
López-Torres S and Fostowicz-Frelik L 2018. The phylogenetic position of the Anagalidae within Euarchontoglires and its implication for the evolution of Glires and Euarchonta. SVP abstract.