This much talked about, but rarely seen ‘Sordes’ specimen
(Fig. 1), has been known for decades. It made a brief appearance some 30 years ago at an SVP talk by David Unwin where it caused quite a stir. I haven’t seen it again since. A scale bar is not shown and the museum number is unknown, but may be one of these three: PIN 104/73, PIN 2585/36, PIN 2585/37.

Not one, but two similar Sordes specimens
were presented by Unwin at SVP decades ago. Both appeared to have a distinct uropatagium stretched bat-like between the sprawling hind limbs (Figs. 1, 2). Everyone wondered whether that membrane was 1) above or below the cloaca, 2) attached or not attached to the tail, and 3) what sort of precursor taxa would gradually develop such a membrane controlled by hyperflexed lateral toes. In bats, of course, the vaguely similar calcar arises from the ankle. The toes are not involved.

Sharov 1971
first described and figured the Sordes holotype (Fig. 2, upper right) with a small drawing that appeared to clearly show a uropatagium stretched between the hind limbs and controlled by those odd Tanystropheus-like elongated lateral toes.

Unwin and Bakhurina 1994
brought this odd bit of flight membrane to a wider audience with a short paper in Nature. Their drawing (Fig. 2 middle right) paid less attention to detail.

Peters 1995
disputed the uropatagium, considering it a displaced wing membrane. That critical hypothesis was presented again in Peters 2002 (Fig. 2, left and bottom).

Figure 2. Sordes wing drift hypothesis from Peters (2002) which attempted to show that the wings and uropatagia of Sordes were more like those of other pterosaurs than the other way around. The very deep uropatagia are misinterpretations prior to the realization that the left brachiopatagium (main wing membrane) was displaced to the ankle area.

Back in 2011,
the uropatagium of the Sordes holotype showed up here with another tracing (Fig. 5) that showed the displaced radius + ulna and its displaced membrane. 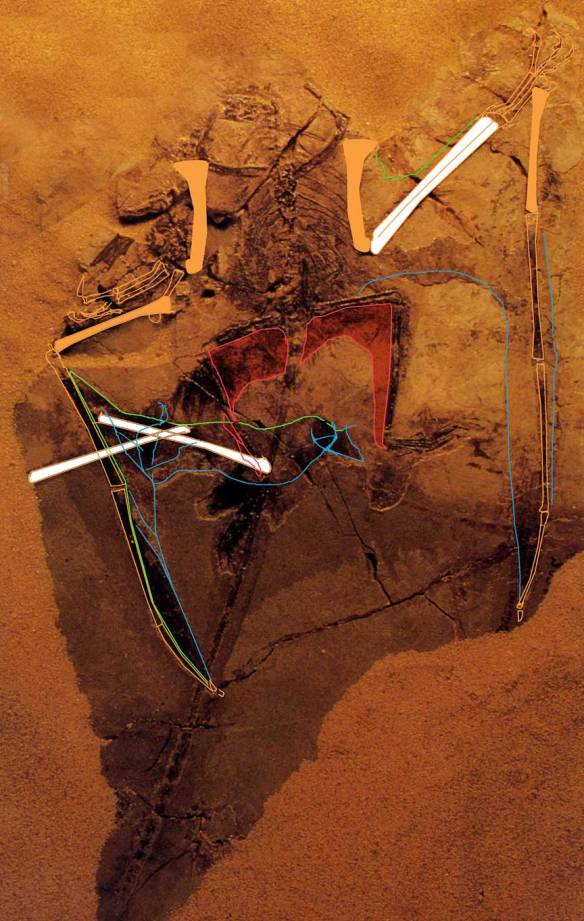 Figure 3. The PIN 2585/3 specimen of Sordes showing displaced left radius and ulna dragging their membranes along with them. The right wing is articulated and shows a short chord wing membrane. Uropatagia are in red.

A new tracing of the rare specimen
(Fig. 4) shows the purported uropatagium extending far beyond the hind limb. That indicates a problem! This is not a uropatagium. Maybe that’s why we haven’t seen this rare specimen for 30 years. A closer examination reveals a series of pterosaur arm bones beneath the hind limb elements. Arm bones or not, this ‘uropatagium’ is a brachiopatagium, a wing membrane, complete with aktinofibrils (Fig. 5).

Adding what little is known
to the large pterosaur tree (LPT, 256 taxa) nests the rare specimen not with Sordes, but with the tiny flightless anurognathid PIN 2585/4 specimen that shares the plate with the holotype of Sordes, PIN 2585/3 (Fig. 2). We looked at that rarely seen specimen earlier here.

Figure 5. Reconstruction of the specimen in figure 4.

Distinct from the flightless PIN 2585/4 anurognathid specimen,
this one has large, robust wings.

In summary
this rarely seen specimen

Someone please tell Rachel Belben
so she can wash her hands of this decades-old error and start fresh.

The Sordes uropatagium is a misinterpretation.
We need to bury this mistake and forget it. Stop promoting and believing this myth. It has been exposed.