Ray-like fish can be confusing
especially if more of the exterior than the interior is preserved (Figs. 2-4). Scoring for the large reptile tree (LRT, 1786+ taxa is based largely on bones, but also on proportions and shapes in detail and overall.

To make matters worse,
ray-like fish like to wrap and fuse their pectoral fins around their face. I mean, who else does that? This one trait is convergent across three clades. Traditional workers suffering from taxon deletion keep mantas, skates and rays in one clade, the invalidated Batoidea, which we looked at earlier here and here. 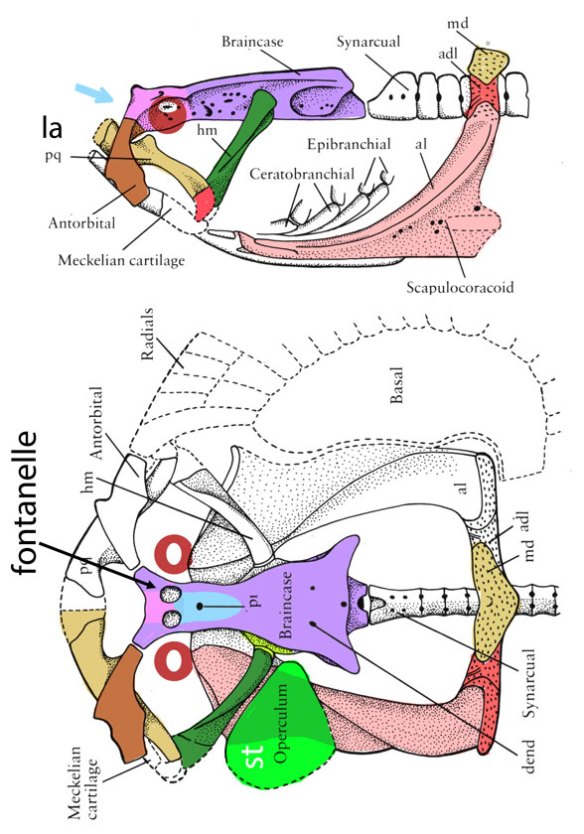 Figure 1. Jagorina in two views from Carroll 1988 and here colored with tetrapod homologs. Note the separation of the tan postparietals and red tabulars from the rest of the skull as in Manta (figure 6).

Jagorina pandora
(Jaekel 1921; 6cm snout tip to synacrural length; Mb.f 510.2; Fig. 1; Late Devonian) was originally considered a type of placoderm different from the rest, but here nests basal to the manta ray, Manta (Fig. 6). The purported dorsal nostrils are instead left and right fontanelles that merge in Manta. The toothless mouth parts were largely transverse and faced forward, as in Manta. The tooth-bearing elements: premaxilla, maxilla and dentary were not present. The post parietal and tabulars were detached from the parietal as in Manta. The purported operculum is the supratemporal. Gill openings could be ventral.

By contrast,
a traditionally related taxon, Gemuendina (Figs. 2–4), is known from exquisitely preserved dermal materials with very little of the skeleton visible beneath. Perhaps someday µCT scans will reveal the interior architecture. (PhD candidates, are you listening?)

Figure 2. Based on the scale bar, this a surprisingly small specimen, shown full scale on a typical computer monitor of 72 dpi. Other specimens are 30cm to 1 m in length.

Gemuendina stuertzi
(Traquair 1903; 30cm to 1m; Early Devonian; Figs. 2–4) was originally considered a placoderm close to Jagorina (Fig. 1). Here both are related to Manta (Figs. 5–6). The famous and often copied diagram above only loosely matches the in situ specimen (Figs. 3–4). The purported dorsal eyes are not dorsal, but tiny and lateral. The purported dorsal nostrils are instead left and right fontanelles that merge in Manta. The purported jutting mouth oriented upward now appears to be a pair of curled under cephalic fins, as in Manta. A mosaic of tessellated scales covers the body, obscuring the skeleton.

Figure 3. Gemuendina in situ. So much skin and ornament cover the bone, this taxon has been withdrawn from the LRT. Apparently the skull and pectoral girdle have separated from the pectoral fins during taphonomy.

Gemuendina is an excellent specimen,
unfortunately obscuring too much of the interior architecture upon which the LRT is built.

Figure 4. Gemuendina skull in situ. So much skin makes this taxon too confusing to score, but note the apparent cephalic fins previously interpreted as a jutting mouth (as in figure 4).

In the above photo
(Fig. 4) I could not find the large eyes and jutting mouth illustrated by Gross 1963 (Fig. 2). But I could find soft remains of cephalic fins and tiny lateral eyes, as in Manta (Figs. 5, 6). 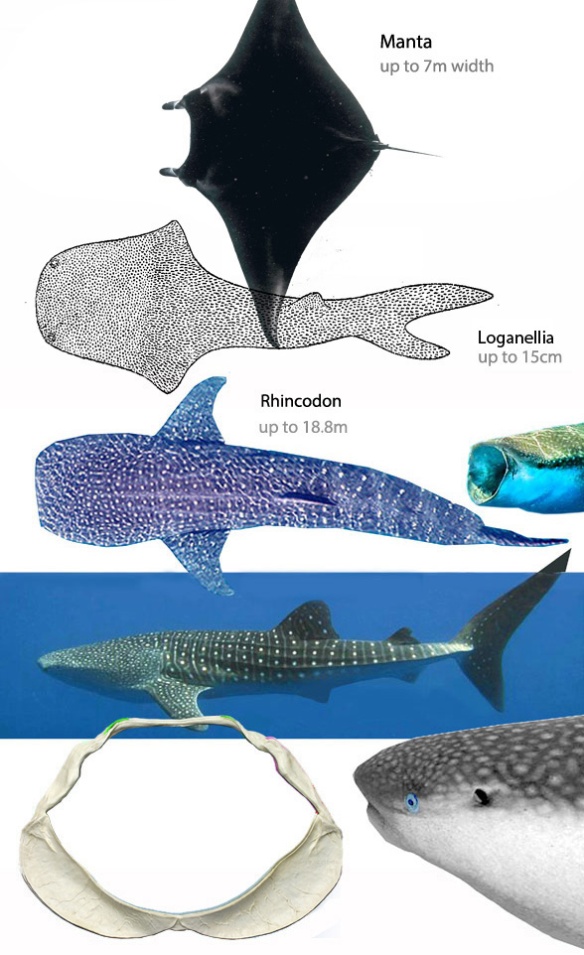 Figure 5.  Manta compared to Thelodus (Loganellia) and Rhincodon. All three have a terminal mouth essentially straight across, between the lateral eyes, distinct from most fish. Note the lack of teeth.

Both extant taxa (whale sharks + manta rays)
have carpets of palatal teeth that look like patches of sharp-to-blunt scales. 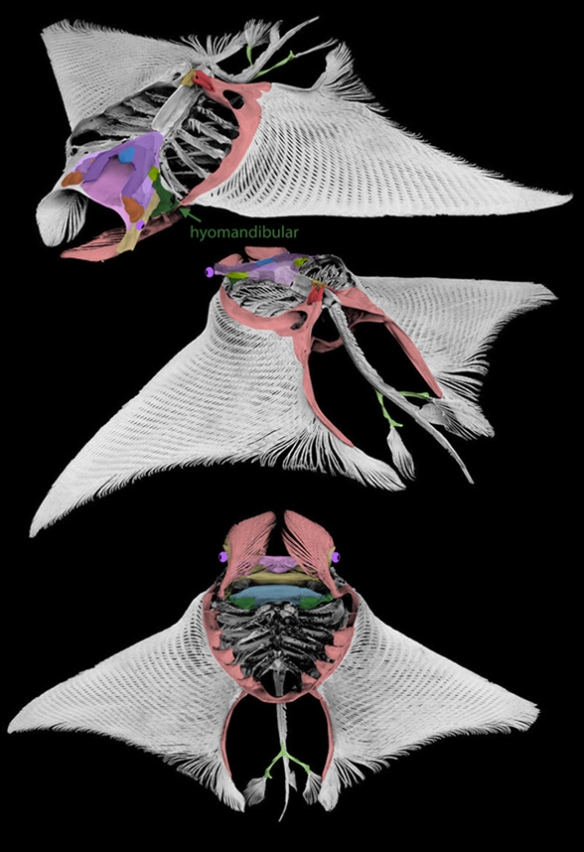 Figure 6. Three views of the skeleton of Manta, colors added. Note the terminal mouth, distinct from other rays, skates and guitarfish. The cephalic fins are continuous from the large face-wrappiing pectoral fins.

This clade of marginally toothless gnathostomes
all feed on free-swimming open-water plankton, rather than the benthic (buried) prey other rays and skates prefer with their ventral mouths full of pavement-like teeth. They filter vast quantities of sea water in a large gill chamber (Fig. 7). 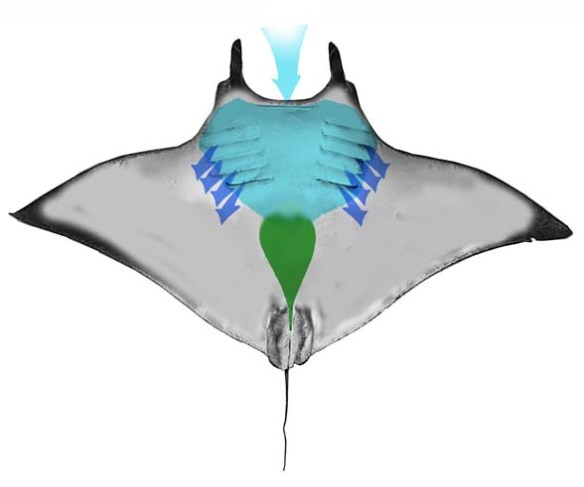 Figure 7. The gill chamber and digestive track of Manta shown in ventral view.

My earlier attempts at understanding
Gemuendina were hampered by not knowing the skin was so thick it obscured the skeleton beneath. Hopefully that mistake is repaired now. If not, further corrections will be made. The addition of Jargorina to the LRT and the deletion of Gemuendina from the LRT brings a more complete understanding of this clade and its ray-like, filter-feeding members.