Summary, for those in a hurry:
Ezcurra et al. 2020 create a chimaera from lagerpetid and protorosaur bits and pieces, then call it a pterosaur precursor close to dinosaurs. Unfortunately, this paper is another taxon omission disaster from Nature.

It is good to see more material data
appearing for lagerpetids (Figs. 4, 13), an enigmatic clade formerly known from pelvic and hind limb material, and more recently from skull bits.

Unfortunately
Ezcurra et al. follow an established history of workers omitting competing taxa in pterosaur origin papers while cherry-picking comparative taxa and employing a chimaera of disassociated and unrelated bits and pieces from a protorosaur and a lagerpetid. By contrast, the omitted pterosaur precursors are complete, articulated, preserve soft tissue and nest closer to pterosaurs in several prior cladograms. 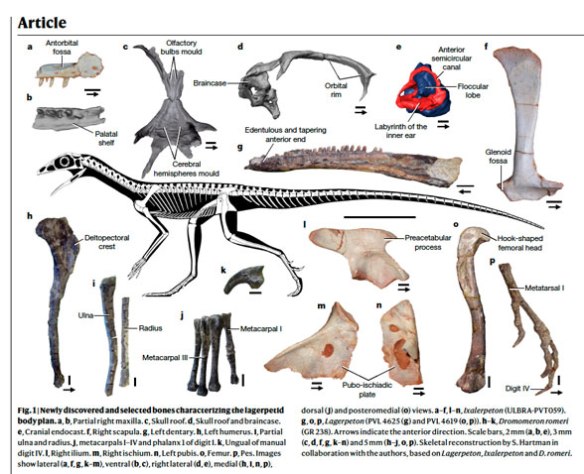 In 2000 the four competing taxa
(Langobardisaurus, Cosesaurus (Fig. 2), Sharovipteryx, Longisquama) where added to four prior phylogenetic analyses and all nested closer to pterosaurs than any prior candidates. The most basal pterosaur, Bergamodactylus (MPUM 6009, Fig. 6), is also omitted from the Ezcurra et al. study. 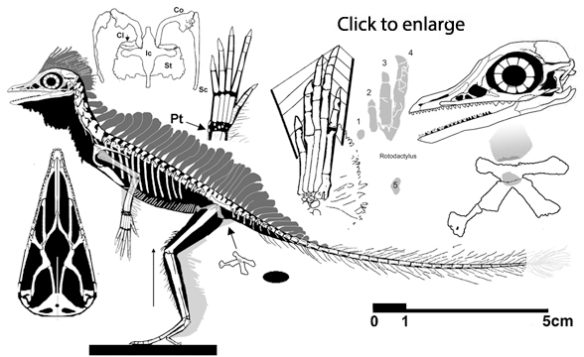 Figure 2.  CLICK TO ENLARGE. Cosesaurus reconstructed with enlarged parts of interest including a pes (foot) matching a Rotodactylus track. Here the pelvis is reconstructed according to figure 3. Shown here about life-size.

Ezcurra et al. take a moment to cite Peters 2000,
but in a misleading fashion: “However, some studies have alternatively recovered pterosaurs as the sister group … among tanystropheid archosauromorphs.”

Not archosauromorphs, “fenestrasaurs.” Peters 2007 moved them all over to Lepidosauria.

All four fenestrasaurs have an elongated pedal digit
with two phalanges longer than the metatarsal, matching basal pterosaurs. A long pedal digit 5 is not found in the new lagerpetid/protorosaur chimaera (Fig. 13). 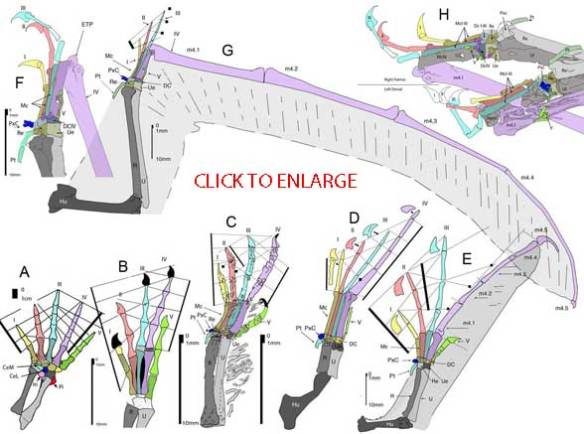 Figure 3. Click to enlarge. The origin of the pterosaur wing and whatever became of manual digit 5?

Manus
Cosesaurus, Sharovipteryx and Longsquama have a robust, elongated manual digit 4 on a robust metacarpal 4 rotated axially. The finger frames the wing membrane in pterosaurs. By contrast, metacarpal 4 is short and not robust in the new lagerpetid/protorosaur (Fig. 4). 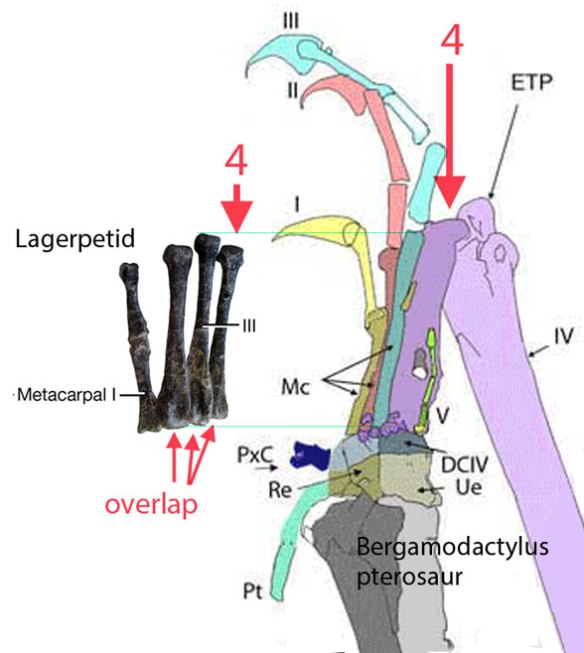 Figure 4. The lagerpetid manus compared to the basal pterosaur manus. In the lagerpetid metacarpal 4 is not larger or more robust than the others. Cosesaurus likewise has metacarpals of similar diameter, but metacarpal 1 is not shorter than the others. Sharovipteryx and Longsquama have a transitional manus, including the evolutionary shortening of metacarpal 1, as in Bergamodactylus. So this trait is convergent in a valid phylogenetic context. Compare to figure 3.

Coracoid
Cosesaurus, Sharovipteryx and Longisquama have a quadrant-shaped, locked down coracoid (Figs. 2, 5). Such a shape is also found in birds and pterosaurs. This enables flapping. The authors reconstruct the new lagerpetid/protorosaur chimaera with a mobile disc-like coracoid. 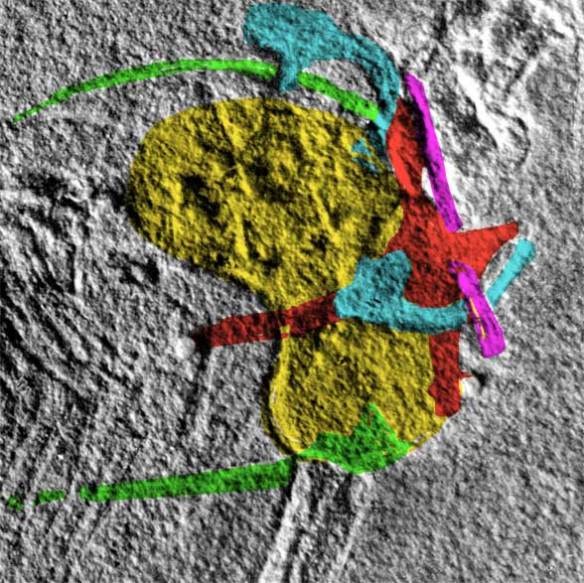 Sternal complex
In Cosesaurus and Longsiquama the ventral stem of the immobile coracoid articulates with a broad sternal complex (Fig. 5) created by the migration and overlapping of robust clavicles, a single lepidosaurian sternum, and a cruciform interclavicle that are fused together in Longisquama and pterosaurs. The new lagerpetid/protorosaur chimaera has no such sternal complex.

Prepubis
Cosesaurus has a prepubis (Fig. 2), a pelvic bone found otherwise only in pterosaurs (Fig. 6). A prepubis is not found in the new lagerpetid/protorosaur chimaera.

Elongate ilium and expanded sacrum
Cosesaurus, Sharovipteryx and Longisquama have an elongate ilium, matching pterosaurs, with a much longer preacetabular process than the new chimaera. The Cosesaurus sacrum, includes four vertebrae articulating with the medial ilium. Sharovipteryx, Longisquama and the basal pterosaur, Bergamodactylus, have more sacrals between longer ilia. The new lagerpetid/protorosaur chimaera has two sacrals. More than two sacrals is common in bipedal taxa. 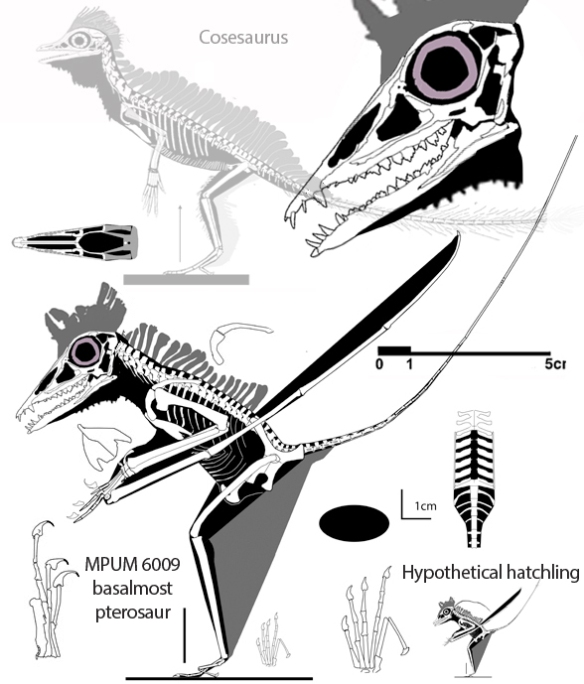 Attenuated tail
The tail of Cosesaurus, Sharovipteryx and pterosaurs is attenuated with tiny chevrons because the tail no longer anchors large caudofemoralis muscles. Such an attenuated tail is not present on the new lagerpetid/protorosaur chimaera, which as deep chevrons.

Pteroid
Peters 2009 documented the migration of two centrale on the wrist of Cosesaurus to the medial rim where they match the pteroid and prearticular carpal in pterosaurs. 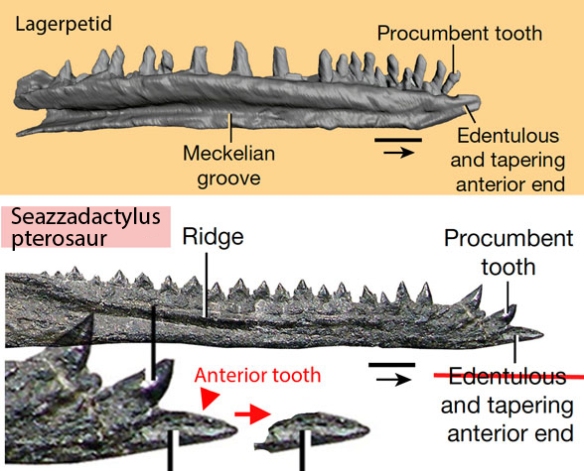 Figure 7. New mandible compared to the Triassic pterosaur Seazzadactylus where the tip is actually a tooth as in Langobardisaurus. 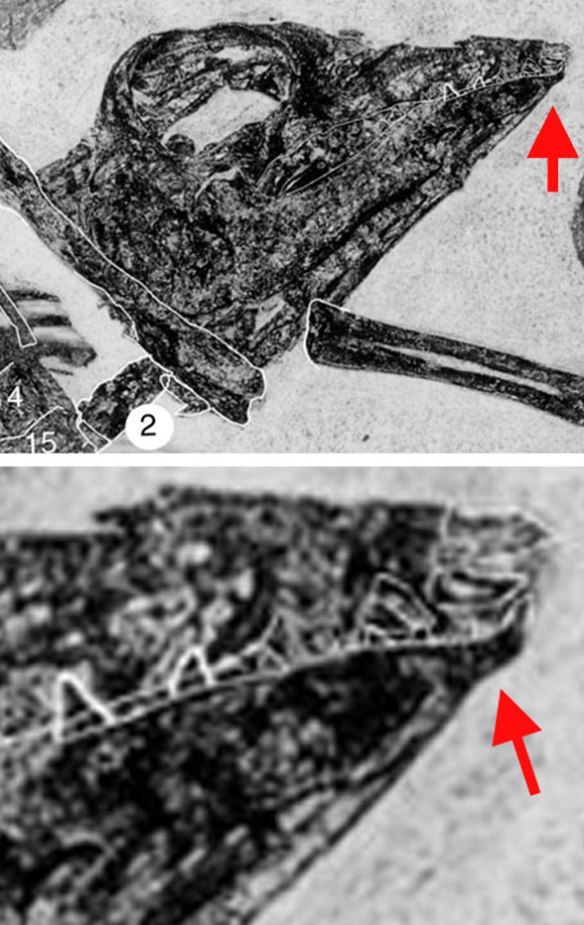 Mandible
The new lagerpetid/protorosaur chimaera mandible has an ‘edentulous and tapering anterior end’ (Fig. 7. The basalmost pterosaur, Bergamodactylus, has teeth at the tip of its mandible. So does the pterosaur employed by Ezcurra et al. (Seazzadactylus, Fig. 8). So does Langobardisaurus (Fig. 8), nesting outside the Pterosauria. 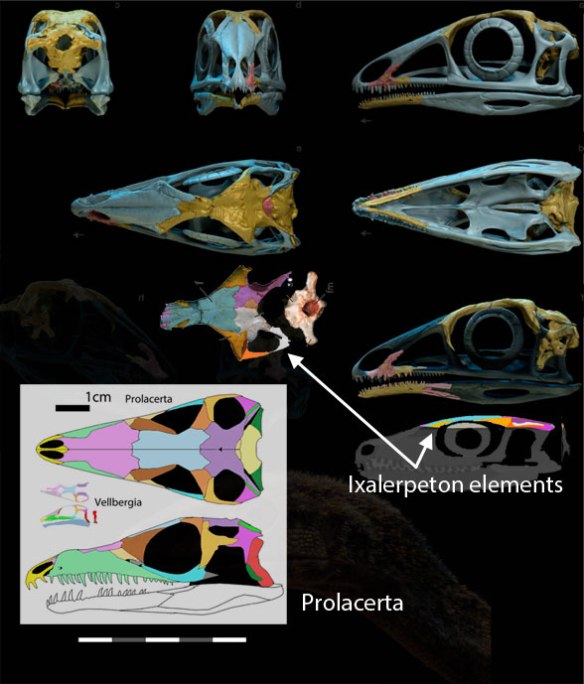 Figure 9. From Ezcurra et al. 2020 comparing skull top of Ixtalerpeton to Prolacerta, not close to lagerpetids. Here the pink Kongonaphon rostrum fragment is matched to the Ixalerpeton cranium.

Femur
Lagerpetid and protorosaur femora have a large trochanter for the insertion of large caudofemoralis muscles. Pterosaurs and the four fenestrasaurs lack a large trochanter because the caudofemoralis has become a vestige and is lost in pterosaurs. The great majority of the femoral muscles in pterosaurs and fenestrasaurs anchor on the pelvis and prepubis instead of the tail. 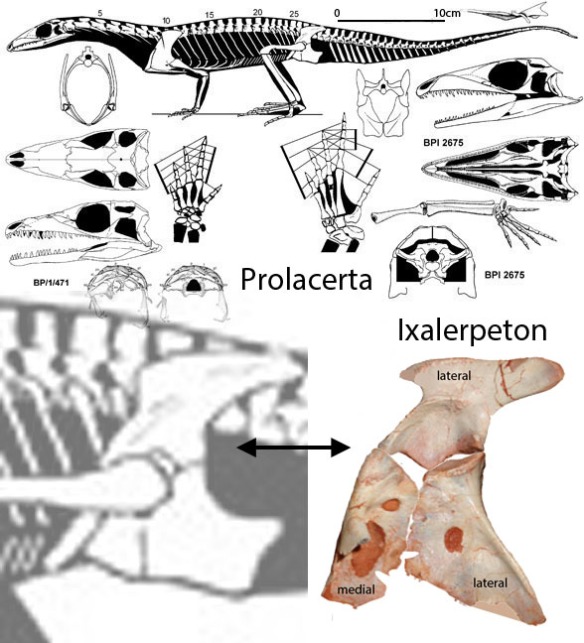 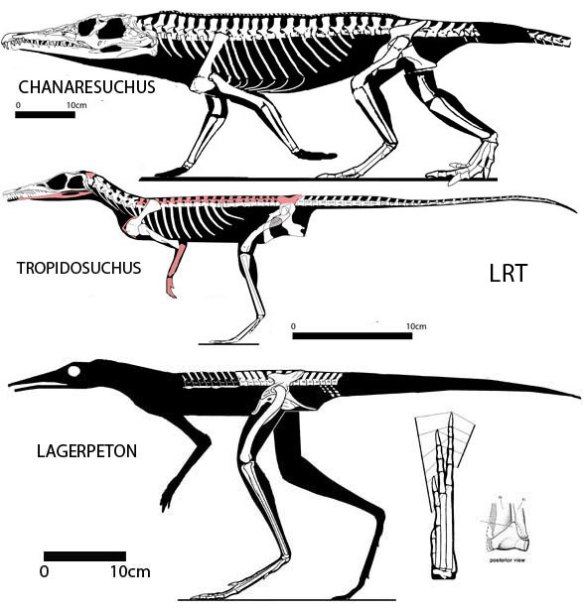 Figure 11 The closest kin of Tropidosuchus are the much larger Chanaresuchus (matching Nesbitt 2011) and the smaller Lagerpeton.

In their study on pterosaur origins,
Ezcurra et al. also omitted a pair of citations of a single supertree study by Hone and Benton (2007, 2008). In the first paper, Hone and Benton announced they would test the taxa in Peters 2000 against those in Bennett 1996. In the second paper Hone and Benton omitted all taxa from Peters 2000, omitted any citation of Peters 2000, then credited both competing hypotheses to Bennett 1996. This is a glaring example of the established history of omitting pertinent and competing taxa in pterosaur origin papers. Dozens of other papers simply omit competing candidates from Peters 2000. Most of them do so without making the mistake of promising in print to include them as part of a study. 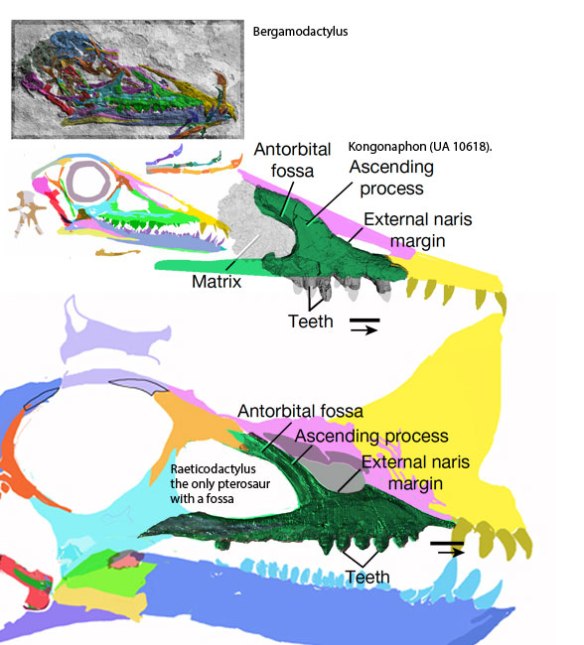 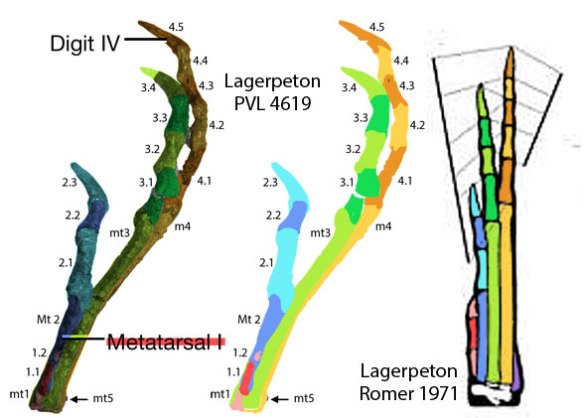 Figure 13. Tracing of lagerpetid pes with colors showing all four toes. Digits 1 and 2 are fused to metatarsal 3. Only digits 3 and 4 bore weight. Digit 5 was a vestige unlike basal pterosaurs.

To combat that long history of omitting taxa,
www.ReptileEvolution.com tests 1775 taxa in a single phylogenetic analysis that includes lagerpetids, protorosaurs, dinosaurs and pterosaurs. In that wide gamut online study, lagerpetids nest with Tropidosuchus and the Chanaresuchidae. Pterosaurs nest with the four fenestrasaurs within a third clade of lepidosaurs, the Tritosauria, far from dinosaurs, protorosaurs and lagerpetids. Chimaera taxa (created from bits of this and parts of that) are not tested..for good reason. There is no cherry-picking here. Taxa nest wherever the software indicates they should.

Here’s the quote from Gizmodo.com that says it all:
“These creatures seem an unlikely sister group from which pterosaurs emerged, which is probably why they’ve been ignored for so long.”