There is a clade of Early Devonian skate-mimic bony fish
recovered by the large reptile tree (LRT, 1757+ taxa). They are tucked into the lobefin clade and have posteriorly-oriented paddle-like fins where preserved (2x out of 7). The preopercular is gone.

Like lungfish,
the exhalant naris was at or near the jawline. This made some of these taxa (e.g. Kenichthys, Fig. 1) worthy of papers in Nature. The authors reported that this feature was said to relate to tetrapod origins. In the LRT this morphology turns out to be convergent with tetrapods and their proximal ancestors. The noteworthy and distinct anterorventral inhalant naris combined with the lateral jawline exhalant naris is shared by all clade members.

This clade of angel-shark mimics was previously overlooked by fish workers.
Here, skull bone identities were a problem until all seven were studied together and reconstructed in multiple views (Figs. 1–8), including the foreshortening of mandibles set at about 45º to the midline in the wider of the two subclades (see below). Most of these are small taxa.

Figure 1. Kenichthys Images from Zhu and Ahlberg 2004, colors added. The authors made a convincing argument that Kenichthys represented a transitional taxon between Youngolepis and Eusthenopteron. Note the lack of vomer fangs and a distinctly different set of skull sutures in Kenichthys, which does not nest with Eusthenopteron in the LRT.

Members on branch 1 include:

Both have a typical narrow mandible no wider than the skull width.

Members on branch 2 include:

In this subclade the jaw joints can extend to twice the width of the cranium (Figs. 3, 6, 7), resulting in a wide, flat skull.  Apparently this trait has gone overlooked in prior studies. The most derived of these clade members, Guiyu and Psarolepis, are the oldest. Only Guiyu and Stensioella preserve post-crania of the 7 tested clade members. Only Youngolepis (Fig. 2) preserves a narrow skull morphology with jaws beneath the orbits.

Kenichthys campbelli
(Chang and Zhu 1993; Zhu and Ahlberg 2004; Early Devonian, 395 mya; Fig. 1) was originally considered a basal sarcopterygian demonstrating the migration of the exit nostril to the jaw rim on its way to the palate to become the choana.

Youngolepis praecursor
(Chang and Yu 1981; Early Devonian 410 mya; less than 30 cm in length estimated; ). Distinct from other lungfish, Youngolepis had large eyeballs and retained a large vomer fang. Note the in-naris and out-naris were both ventral in exposure.

Figure 3. Skull of Tungsenia from Lu et al. 2012. Tetrapod skull colors added and restored based on related taxa. Here the tooth-bearing portion of the premaxilla is missing. So are the vomers, which may have had fangs, like those of Youngolepis (Fig. 4),

Tungsenia paradoxa
(Lu et al. 2012; Early Devonian; Fig. 3) was originally considered the earliest known stem-tetrapod (= taxa closer to tetrapods than to lungfish). In the LRT it nests with Youngolepis outside of the tetrapods + lungfish.

Stensioella heintzi
(Broili 1933; Emsian, late Early Devonian; 27 cm est.; Fig. 4 is widely considered the most basal placoderm, but here nests outside that clade.  Stensioella would have had a lifestyle like Squatina, the extant angel shark.

Figure 5. Stensioella from nose to tail. Note the large paddle-like pectoral fins, as in Guiyu (Fig. 5).

Figure 6. Styloichthys preserves mandibles that greatly widen the dimensions of the skull.

Guiyu oneiros
(Zhu et al. 2009; late Silurian; V17914) was originally considered the earliest articulated bony fish discovered. It was originally given a Eusthenopteron-like reconstruction. The revised restoration differs somewhat from the original in having a flatter oblate cross-section and large Stensioella-type pectoral flippers. 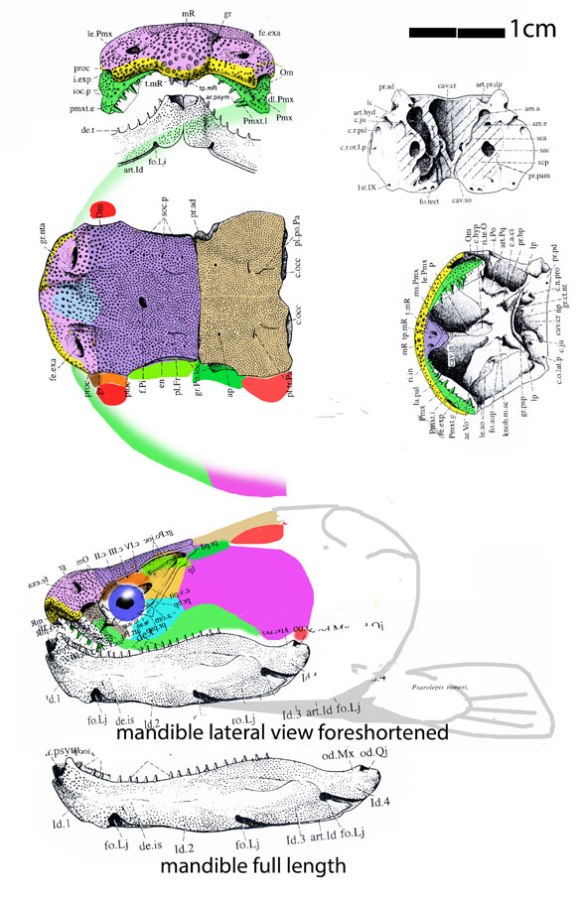 Psarolepis romeri
(Yu 1998; Zhu et al. 2014; Late Silurian; Fig. 8) is known from parts of its face and a complete mandible.  The upturned and short rostrum includes large in and out nares located higher on the skull. Nearly all the bones of the cranium are fused together. The upturned tip of the mandible lacks teeth. The mandible is likewise largely fused but with deep fovea.