Bantim et al. 2020 document
a new “pteranodontoid pterosaur with anhanguerid affinities (MPSC R 1935) from the Romualdo Formation (Lower Cretaceous, Aptian-Albian), is described here and provides one of the few cases where the ontogenetic stage is established by comparison of skeletal fusion and detailed osteohistological analyses.”

Continuing from the abstract
“The specimen … consists of a left forelimb, comprising an incomplete humerus, metacarpal IV, pteroid and digits I, II, III, IV, including unguals. This specimen has an estimated maximized wingspan of 7.6 meters, and despite its large dimensions, is considered as an ontogenetically immature individual. Where observable, all bone elements are unfused, such as the extensor tendon process of the first phalanx and the carpal series. The absence of some microstructures such as bone resorption cavities, endosteal lamellae, an external fundamental system (EFS), and growth marks support this interpretation. Potentially, this individual could have reached a gigantic wingspan, contributing to the hypothesis that such large flying reptiles might have been abundant during Aptian-Albian of what is now the northeastern portion of Brazil.” 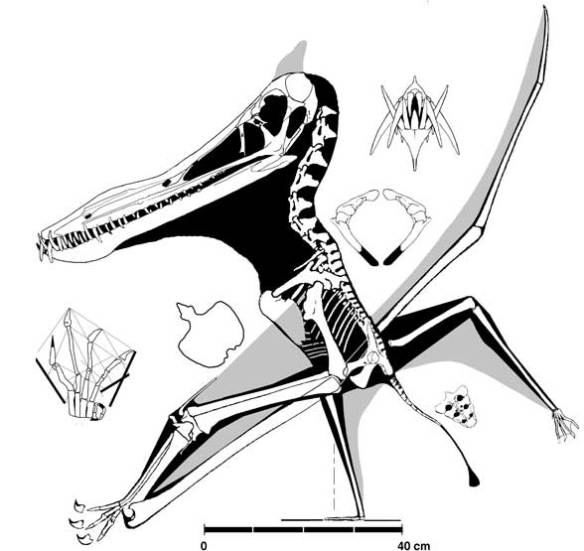 By comparison,
coeval Anhanguera has a 4.6m (15 ft) wingspan. The largest complete ornithocheirid, SMNK PAL 1136 has a 6.6m wingspan.

Bone elements fuse and lack fusion
in phylogenetic patterns (rather than ontogenetic patterns) in the clade Pterosauria, as documented earlier here in 2012. That is why you can’t keep pretending pterosaurs are archosaurs and not expect problems like this to accumulate. Your professors are taking your time and money and giving you invalidated information.

It is a continuing black mark on the paleo community
that pterosaurs continue to be considered archosaurs by paid professionals when phylogenetic analysis (and Peters 2007 and the LRT) nests pterosaurs with lepidosaurs. That is why pterosaurs have lepidosaur phylogenetic fusion patterns (Maison 2002, 2002) distinct from archosaur ontogenetic fusion patterns. Just add taxa colleagues. The pterosaur puzzle piece does not fit into the archosaur slot… everyone admits that. The pterosaur puzzle piece continues to fit perfectly and wonderfully in the fenestrasaur tritosaur lepidosaur slot.