Anderson and Ruxton 2020 start their ‘origin of bats’ hypothesis
by describing the origin of flight membranes (as far as is known to them) in insects, pterosaurs and birds, before proceeding to bats. About pterosaurs they write, “This membrane is believed to have been used for display purposes prior to being recruited as flight apparatus, meaning that the wings of pterosaurs would have originated at the distal end of the limb and developed proximally later (Peters 2001).”

Finally a paper citing Peters 2001! It may be the only paper to consider how pterosaur wings came to be with real taxa. (Also see below for criticism of this citation). The authors note that birds also used their pre-volant wings for display.

Then the authors move on to bats.
When discussing phylogeny, the bedrock of any vertebrate study, they write, “the order Chiroptera has now confidently been arranged as monophyletic and placed within the clade Laurasiatheria (Madsen et al. 2001) along with the order Eulipotyphla (hedgehogs – Erinaceidae, shrews – Soricidae, moles – Talpidae, etc.).”

Unfortunately, this is wrong. They are citing authorities relying on invalid genetics, rather than finding out for themselves using traits. Bats are not related to ground-dwelling hedgehogs, shrews and moles according to the large reptile tree (LRT, 1734+ taxa). Rather, based on fossils and traits bats arise from arboreal tree shrews, including sisters to extant Ptilocercus (Figs. 2, 3) and extinct Chriacus (Fig. 2).

The authors venture only part of their hypothesis with this statement:
“Given the apparently idiosyncratic combination of laryngeal echolocation and powered flight present only within the Chiroptera, understanding the evolution of powered flight in the group is inherently linked to understanding the evolution of laryngeal echolocation.”

And…that’s when they go down the rabbit hole. Phylogenetic analysis of traits, not genes, not teeth, not the larynx, provides ALL the clues to the evolution of bats. ‘The Origin of Bats‘ is a topic that has proven overwhelming popular here at PterosaurHeresies. Several hypotheses have been put forth. The latest is here, with links therein to earlier posts.

Again, reading from outdated textbooks,
the authors note, “Both birds and pterosaurs are members of the Sauropsida, the amniote clade that diverged from the Synapsida approximately 310 mya (Kemp 2005), leaving the question: why is powered flight more common in the Sauropsida than in the Synapsida?”

Again, reading from outdated textbooks,
“The Archosauria includes the birds and the pterosaurs, both of which possessed this unidirectional airflow respiratory system (Claessens et al. 2009).”

The authors cite mistake after mistake
without critically reviewing or testing it, “Now, with the recent publication of the discovery of the winged theropod, Ambopteryx longibrachium (Wang et al. 2019), the stage is set for a reexamination of the story of the evolution of flight in bats.” We looked at the wings of Ambopteryx earlier here.

An excellent review
of bat anatomy appears in the Anderson and Ruxton paper with many citations.

When Anderson and Ruxton begin to explain their ‘novel’ hypothesis
they start with a hopeful, but invalid statement, “It is likely that bats evolved true flight from an ancestral gliding state (the aerodynamics of this have been subject to detailed theoretical modelling; Norberg 1985, Hedenstrom & Johansson 2015 and references therein).”

The authors note,
“the question of exactly how and why a flapping motion originated from gliding remains unexplained.”

Flapping never arises from gliding. This sort of myth perpetuation is what happens when young paleontologists have to follow what the textbooks and professors say, instead of thinking and testing all ideas.

So, here’s what Anderson and Ruxton propose:
“The echolocation-first hypothesis proposes that nocturnal pre-bats used a reach-hunting technique to capture flying insect prey. This technique involves reaching out with the forelimbs from a stationary perch and is likely to have involved a complex sensory system to calculate and predict prey movements.”

Pretty ambitious and doing so without resorting to an anglerfish-like illuminated lure to entice insects within range. (Hyperbolic satire there). What Anderson and Ruxton propose is Lamarckism at its worst.

More from Anderson and Ruxton:
“Over time, the echolocation would have become more sophisticated and the forelimbs would extend further and include an interdigital membrane to improve prey capture while the pre-bat remained perched, by creating a larger ‘net’. Gliding and then flight would have developed later, as the pre-bats leapt from their perch to reach insects further away, and echolocation would have been secondarily lost in pteropodids (Speakman 2001).” The authors also cite, Fenton et al. (1995).

This presumes the reward of capturing each insect was worth the price of falling from their perch and climbing up again. Failure to capture each insect every time would have resulted in no reward. A discussion of the leaf litter cushion below each perch would have been appropriate here.

To their credit, the authors note,
“the morphology required to allow gliding is completely different from that of the wings of birds during development and in terms of aerodynamics.”

Flashing forward to the big  Anderson and Ruxton reveal:
“Introducing the interdigital webbing hypothesis.” Then, “it is possible and perhaps likely that these three groups [of bats, see Fig. 1] developed their respective flight and echolocation abilities independently from one another.”

According to Anderson and Ruxton,
the last common ancestor of all bats would have been:

According to Anderson and Ruxton,
diverging clades developed like this (see Fig. 1):

To their credit, the authors note,
“This interdigital webbing morphology would have been advantageous to pre-bats…   would allow the animal to detect fine-scale information about its substrate, allowing better grip in darkness and perhaps even allowing the animal to detect vibrations produced by the movement of predators or prey along the substrate.”

This follows the hypothesis generated earlier here (Figs. 2, 3), but does not specify a leaf litter substrate filled with insects and other animals making sounds as they move through it.

Unfortunately the authors cite ‘authority’, rather than testing for themselves, when they mistakenly note colugos are genetically distantly related to bats. 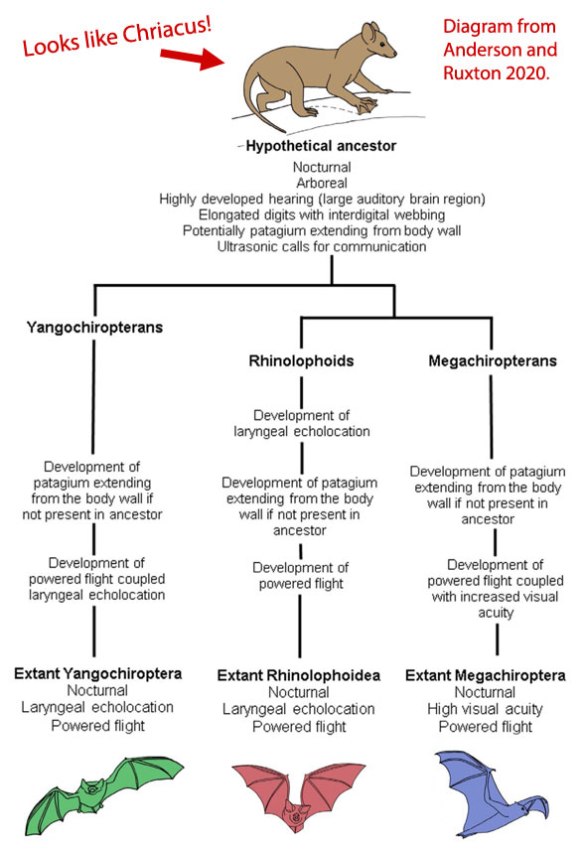 Figure 1. Diagram from Anderson and Ruxton 2020 offering their origin of bats hypothesis. This represents the latest (2020) information in the academic literature on the origin of bats. The brown creature is imaginary. 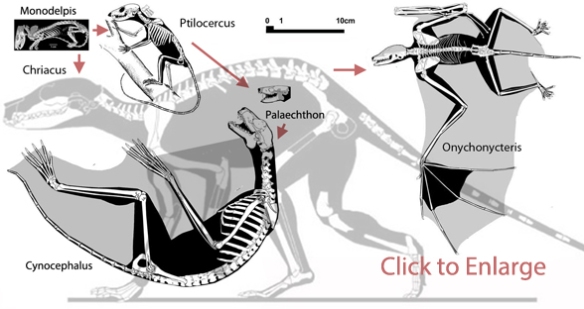 Figure 2. Known bat ancestors and relatives to scale according to the LRT. Click to enlarge. 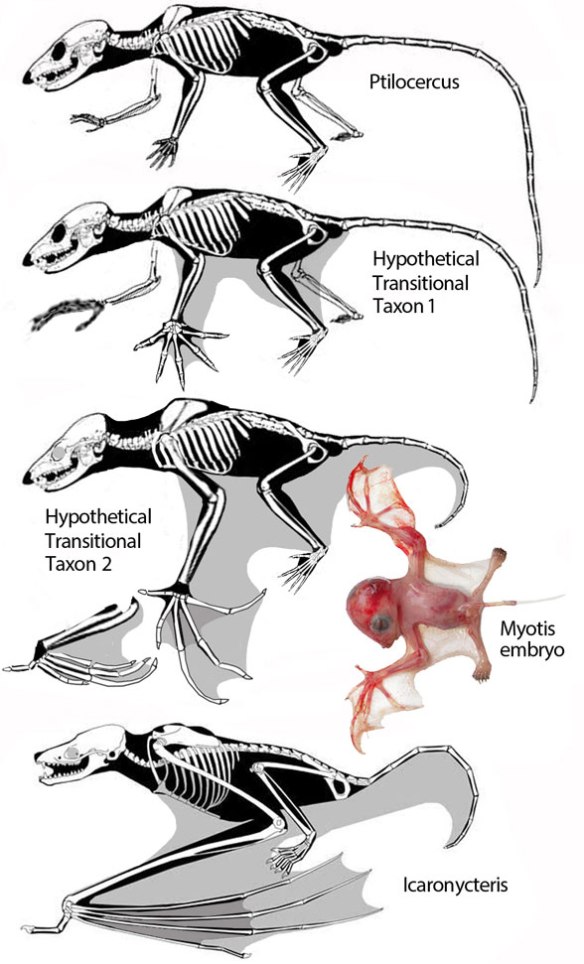 Figure 3. Starting with Ptilocercus here are several hypothetical transitional taxa leading to Icaronycteris, a basal bat. Note only digits 3–5 contribute to the winging the Myotis embryo. Note also the separation of the finger membranes from the torso membranes.

Anderson and Ruxton conclude,
“Drawing on comparisons from the vertebrates, and in the light of the recently published description of the membrane-winged dinosaur Ambopteryx longibrachium, this interdigital webbing hypothesis provides a biologically satisfying narrative for the evolution of flight in bats, from arboreal mammals to the fastest-flying vertebrates that we know of.”

Regarding the rare citation of Peters 2001,
members of the Dinosaur Mailing List had this to say in the past few days:

Thomas Yazbeck: Anderson & Ruxton cite Peters (2001) and seem to accept his very controversial pterosaur – prolacertiform connection at face value. Did they do a deep enough dig into the archosaur literature?

Tyler Greenfield: Anderson stated on Twitter that she wasn’t aware of the problems with Peters’ work when she wrote the paper. This is understandable as she’s not an archosaur researcher.

Mickey Mortimer: In all fairness, that was before Peters became a crackpot/troll, and the lack of any modern engagement with Longisquama (besides the parafeathers), Cosesaurus or Sharovipteryx is a genuine problem he continues to be correct about. I still think such a relationship is plausible.

Note that
Yazbeck cites authorities based on taxon exclusion, rather than his own competitive testing that replicates the taxon list in the Peters 2000, 2001 experiments. Greenfield is closing a wound on Anderson she didn’t know she had. Mortimer has reverted to middle-school name-calling, then turns around and semi-supports the original hypothesis that started this blog. All the above problems can be resolved by simply adding taxa.

References
Anderson SC and Ruxton DD 2020. The evolution of flight in bats: a novel hypothesis. Mammal Review 1–14. Published by Mammal Society and John Wiley & Sons Ltd.
Peters D 2000b. A Redescription of Four Prolacertiform Genera and Implications for Pterosaur Phylogenesis. Rivista Italiana di Paleontologia e Stratigrafia 106 (3): 293–336.
Peters D 2001(2). A New Model for the Evolution of the Pterosaur Wing – with a twist. – Historical Biology 15: 277–301.