Yesterday we took a detour into the realm of invertebrates
comparing large, extant, colorful, free-swimming marine flatworms and trilobites to the giant of the Cambrian, Anomalocaris. Although the three taxa show a gradual accumulation of traits and are overall similar in shape, readers suggested some ‘further reading’ of the academic literature was needed.

That reading has been fascinating
and a defense of that minor thesis is forthcoming. So far that argument looks like it will need several building blocks.

Meanwhile… today brings one of those building blocks.
Opabinia (Figs. 1, 2) is yet another strange Cambrian taxon often found in the same cladogram as Anomalocaris (Figs. 3, 4). Whittington’s (1975) first interpretation of Opabinia was met with laughter due to the implausible ‘strangeness’ of the fossil.

Perhaps the following
will take some of the strangeness out of Opabinia. It has some overlooked relatives, one still living, Stylaria, a tiny segmented worm with a mobile proboscis (Fig. 2). Note the presence of eyes, a head section, a tail section and precursors to swimming lobes present as needle-like lateral spines, one per segment. Opabinia only stands out as odd (Fig. 3)  until you add a few similar taxa.

Figure 2. Comparing the extant worm, Stylaria to Cambrian Opabinia and Carboniferous Tullimontrom. All three share a similar morphology that has not been fully explored yet. The proboscis does not aid in feeding Stylaria and it probably acted as a simple probe and/or holdfast for Opabinia and Tullimonstrom. Note the lack of legs in any of these taxa.

According to Wikipedia,
“When the first thorough examination of Opabinia in 1975 revealed its unusual features, it was thought to be unrelated to any known phylum, although possibly related to a hypothetical ancestor of arthropods and of annelid worms. However other finds, most notably Anomalocaris, suggested that it belonged to a group of animals that were closely related to the ancestors of arthropods and of which the living animals onychophorans (velvet worms) and tardigrades may also be members.”

Given the many shared traits with Stylaria, the proboscis in Opabinia does not appear to be used elephant-like, as Whittington 1975 suggested, for carrying prey items back to the ventral mouth. Rather the proboscis was more likely used as a sand probe and/or a poison delivery system. Feeding would have taken place in a more typical flatworm fashion, by settling over a docile prey item and everting soft ventral mouth parts to haul in food that had stopped struggling.

Smith and Ortega-Hernández 2014
offered a competing hypothesis of interrelationships (Fig. 3). In their study focusing on the terminal claws of another Burgess Shale former enigma, Hallucigenia, the authors included Anomalocaris and two related anomalocarids. Opabinia was the outgroup. Stylaria and Tullimonstrum were excluded taxa.

I have no issues with the presence of walking velvet worms nesting with walking tardigrades and walking Hallucigenia. However, I think legless, swimming Opabinia and Anomalocaris do not belong here. An omitted primitive legless taxon, Stylaria (Fig. 2) needs to be added to the Smith and Ortega-Hernandez taxon list to ascertain or modify relationships. More outgroups are probably needed. Or delete the inappropriate swimmers. 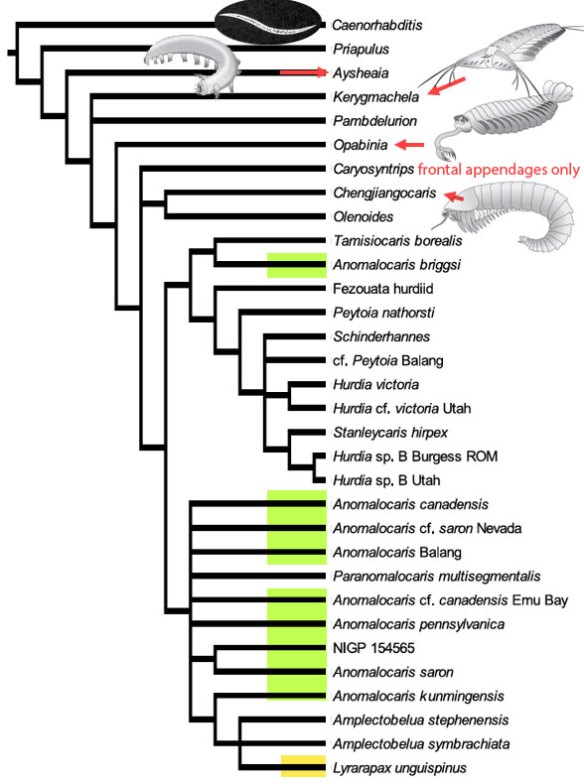 Figure 4. Cladogram from Cong et al. 2014 nest Anomalocaris in the clade Radiodonta derived from nematodes and penis worm in which the mouth and anus are both terminal.

The case is building that
Anomalocaris and Opabinia never went through an evolutionary phase in which the body was cylindrical with the short clawed feet of velvet worms and tardigrades. Instead these two appear to have evolved directly from free-swimming segmented worms without legs. Let’s keep adding taxa to figure this out.