Mao et al. 2020 report on a
crushed and articulated Early Cretaceous multituberculate specimen of Sinobaatar (Fig. 1). Presently several species are known. This one was µCT scanned.

From the abstract
“We report a new Cretaceous multituberculate mammal with 3D auditory bones preserved. Along with other fossil and extant mammals, the unequivocal auditory bones display features potentially representing ancestral phenotypes of the mammalian middle ear.”

The authors made several basic mistakes with Sinobaatar.

The takeaway:
Not matter what the configuration of the middle ear in Sinobaatar, if the rest of the skeleton nests it in Glires, maximum parsimony says: Sinobaatar and all multituberculates nest in Glires.

Figure 1. Sinobaatar skull in two views. DGS colors added. The skull was crushed from side to side.

The authors report in the SuppData:
“Given several recent efforts of higher-level phylogenies of mammaliaforms [1-3] and the relatively stable position of multituberculates (Sinobaatar in particular) within mammals in all these studies, we consider it redundant to run another phylogenetic analysis.”

Redundant, yes, if using the same taxon list. But adding members of Glires to that taxon list changes everything.

Figure 2. Cladogram from Mao et al. 2020 with the wrong phylogenetic order, repaired on frame 2 in which Origolestes and Liaoconodon are late-surviving mammal mimics, not mammals.

The wide gamut of the taxon list
in the large reptile tree (LRT, 1729+ taxa; subset Fig. 3) minimizes taxon exclusion. When taxa that have never been tested together before get tested together, sometimes they nest together. You just have to let the software do what it does best and keep shoveling in more taxa.

Figure 3. Subset of the LRT focusing on basal placentals, including multituberculates.

The authors report,
“While the auditory bones already detached from the dentary in the three phenotypes, the transitional middle ear of Liaoconodon is most primitive in that the malleus and ectotympanic have long anterior processes that are still in contact with the ossified Meckel’s cartilage; thus, hearing and chewing functions were not completely separated. Origolestes is more derived in having lost the bony contact of the auditory bones to the ossified Meckel’s cartilage so that hearing and chewing functions were decoupled.”

Without a valid cladogram the authors assume the order of evolution without really knowing. In the LRT Origolestes is not a mammal and the more primitive of the two, hinting at an earlier stage in a reversal. The LRT lumps and separates taxa to reveal such reversals. 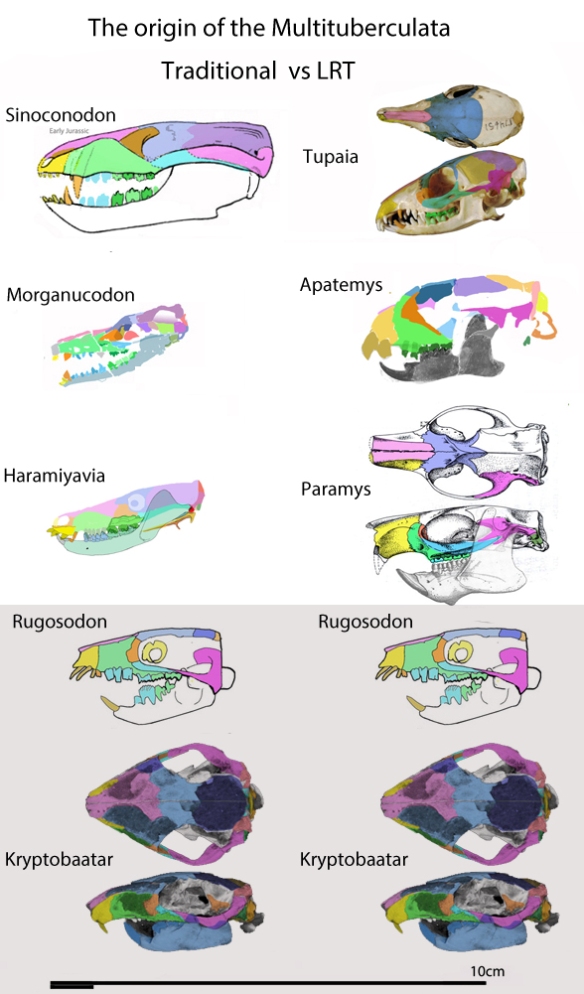 The authors report,
“With the assumption that the DMME evolved independently in monotremes, therians, and multituberculates, there should be no common ancestral phenotype of the middle ear for these clades.”

That is incorrect. The LRT nests multituberculates within the gnawing clade, Glires (Fig. 3). The LRT indicates the primitive nature of the middle ear of multituberculates is a reversal likely caused by the great propalinal movement of the gnawing jaw interfering with and preventing normal maturation of the placental middle ear and leaving it at a more primitive state. You can have more confidence in this hypothesis because more taxa are tested, ‘leaving no stone unturned.’

Every description you’ll ever see
of multituberculates, plesiadapiformes, carpolestids and the aye-aye, Daubentonia, includes the phrase, “rodent-like” for a very good reason. That’s because they are closely related, something Mao et al. 2020 and other multituberculate experts do not yet realize. Adding taxa always resolves problems. Just do it. Don’t “Pull a Larry Martin.”