It happened over the past several months
to Xing et al. 2020 after they published in Nature on their hummingbird-sized ‘dinosaur’ in amber, Oculudentavis. Then, oops! Everyone else recognized the specimen as a lepidosaur. Last week Nature and the publicly-shamed authors retracted the paper with a fair amount of bad press.

Meanwhile, on a more personal note…
imagine examining fossils across the ocean without a science degree and ‘discovering’ four overlooked ancestors to pterosaurs (Peters 2000; Fig. 2). None had been identified before and no others have been identified since. Actually these pre-pterosaurs were recovered by adding their data to four previously published phylogenetic analyses, not by finding fossils in the field. Unfortunately (and this is true), for the next twenty years that paper, that discovery and several that followed (Peters 2002, 2007, 2009) were never cited in a supportive sense. Instead these peer-reviewed papers were shunned and ignored.

Worse yet,
imagine a gathering of PhDs rising against you online. Some call you a ‘hack’ even though you followed all the rules and did all the work with the proper citations, acknowledgements and peer review. When one studies specimens and writes papers, the furthest thing on your mind is a future with online shaming from the cancel culture.

Figure 1. Scene from Animal House after Otter walks into a hotel room with roses for his rendezvous, only to meet the five frat boys ready to deliver a little punishment.

All is not lost. Patience is the watchword here.
No one else can ‘discover’ these interrelationships (Fig. 2). They are time-stamped in the academic literature. Perhaps the best thing one can realize is: the enmity coming from other scientists turns out to be a relatively common phenomenon.

The question is:
why do some scientists demonize and shun discoverers?

Figure 2. The lineage of pterosaurs recovered in Peters 2000 and from the large reptile tree. Huehuecuetzpalli. Cosesaurus. Longisquama and MPUM 6009 (Bergamodactylus).

Author Jon Ronson
on the Joe Rogan Experience #668, discusses his book, ‘So you’ve been publicly shamed.’ Here he takes the antagonists’ point-of-view:

“We will reduce somebody to a label. We’ll reduce somebody to the worst tweet that they ever wrote. We’ll demonize them and then we’ll de-humanize them, because we’ve just destroyed somebody and we don’t want to feel bad about destroying them so we call them ‘sociopath’ or something.”

“It’s a whole mental trick we play on ourselves. Like, cognitive dissonance. We’re good people, but we just destroyed somebody. So how do we make sense of that?”

“So it’s all about labeling and reducing and demonizing people we don’t like.”

Then Joe Rogan pipes in:
“And it’s also an excuse to be a real asshole. Like all you have to do is find a reason to unleash your fury on people. And it’s a free shot.”

Whenever someone calls you a ‘hack’,
try to see things from their point-of-view. Do they have a point? Is there something you have to do to ‘clean up your act?’ If so, then clean up your act. Do more than is expected. Add taxa. Trace details. Show your work. Double check your results for errors. Write to experts for their advice (but be wary if they try to send you snipe hunting). After you’ve done all that, all to no avail, then consider the following…

Sometimes personal attacks are the result of unfulfilled expectations.
After all, some paleontologists spend a lot of money and many years getting a PhD only to find out professorial jobs are as rare as bird teeth. Discoveries are even harder to come by, whether in the field or by fossils occasionally sent to them.

So, it’s no wonder PhDs are pissed off
when a nobody from a small town in middle America starts harvesting the literature, adding taxa to a growing online vertebrate cladogram and making discoveries several times a week. That cladogram, the core of ReptileEvolution.com, now exceeds in size and breadth any vertebrate study ever published (samples from 1700+ fish to humans are included). New insights were recovered just by testing taxa together that have never been tested together before (like pterosaurs and lepidosaurs, Fig. 2).

The unfortunate fact is: the list of discoveries waiting to be discovered
is limited and it gets shorter everyday. Today’s young paleontologists earned their PhDs in order to make those rare discoveries. So, imagine their wrath when an unschooled outsider showed them their expensive and time-consuming education was not really necessary, at least at this stage in paleontology. What was necessary was a comprehensive review of the literature and a single wide gamut test to reveal where taxon exclusion had resulted in traditional false positive results.

Getting back to Animal House for a moment…
Otter thought he was going to get a little romance the night he opened the door to a motel room, with the cheerful line, “It’s “Mr. Thoughtful” with a dozen roses for… you…” only to be met by a cadre of frat boys ready to pummel him (Fig. 1). Likewise, twenty years ago when I recovered four pterosaur ancestors, I thought good things would follow. Alas, that still has not happened. Nothing but ostracizing and enmity has followed.

Sadly, some of the things you learn in paleontology
are not found in textbooks. One is the extremely slow pace of acceptance in this field.

Remember it took paleontologists 150 years
to elevate the tails of tail-dragging dinosaurs and to realize birds were dinosaurs. It will take them more than twenty years to realize pterosaurs were lepidosaurs. Unlike other sciences, paleontological discoveries and recoveries, especially from outsiders, are not welcome.

So, if you make a discovery, take your punishment cheerfully
and maintain your scientific work ethic. Be patient. If you play it straight, and put the work in, you already know how this movie is going to end. Starting off, your only allies will come out of the ‘Delta House‘ fraternity, but soon you’ll have the whole audience on your side.

Good luck on your scientific journey.
Rest assured that others have been through whatever you’re going through now.

Postscript:
It’s no wonder that some workers thought Oculudentavis was a bird, while others thought it was a lepidosaur. After testing all known candidates, it turns out Oculudentavis was a late-surviving sister to Cosesaurus (Fig. 2), which was originally and mistakenly considered a Middle Triassic bird ancestor (Ellenberger and DeVillalta 1974). Later Peters (2000, 2007) recovered Cosesaurus as a lepidosaur and a flapping pterosaur ancestor. So, these related taxa tell the same story.

All this confusion over Oculudentavis could have been avoided
if the pterosaur community had not shunned and shamed the results of Peters 2000, 2002, 2007, 2009. Due to that suppression the bird-like lepidosaur, Cosesaurus, was not on the radar of Xing et al. and it was not tested to ascertain relationships.

And that’s how the ripples radiate.

Advice for would be paleontologists: stay professional!

A Blind Eye Toward Pterosaur Origins

Let’s open up an old can of worms

And finally this carbon copy reply to a recent (2020) TetZoo blogpost
by PhD Darren Naish, doubling down on his earlier (2012) blogpost, “Why the World Has to Ignore ReptileEvolution.com“. This was followed by a long list of comments by a cadre of angry paleontologists.

“Well, fellas, that’s a lot to drink in. Thank you for all the attention.

ReptileEvolution.com is an online experiment in which I learn as I go. Just like a professional. True, I made over 100,000 errors in scoring or drawing over the last nine years. In understand in science that’s part of the process.

A few points worth considering:

Taxon exclusion is the issue I bring up over and over again. Just add pertinent taxa, score correctly and see what PAUP delivers. Shouldn’t be too hard. Add some placoderms to some catfish taxa. Add some caseasaurs to millerettids. And show your work.

Cau’s study on pterosaurs arising from Scleromochlus (a basal bipedal crocodylomorph) seems odd given that the hand is so small in Scleromochlus and the foot lacks a long toe 5, etc. etc. No illustrations accompany the cladogram, so we don’t know what characters were correctly or incorrectly scored for Sharovipteryx and Cosesaurus. I show my work. Ellenberger thought Cosesaurus was a Middle Triassic bird ancestor and I could not convince him otherwise. So whatever the problem is, it’s common and I’m used to it.

Yi qi: seriously? Please send data on both ulnae, both radii and the both styliforms. I will make the change to create the flying dragon if you can show valid data. Ball is now in your court.

Some hits later ‘discovered’ by others:
https://pterosaurheresies.wordpress.com/?s=heard+it+here+first&submit=Search

Figure 3. Darren Naish did not like the more precise tracing made by yours truly. He though I was seeing things. The tracing at upper left is the original published tracing by the fossil describers.

Hey, Darren, what’s wrong with that tracing of Jeholopterus skull? (Fig. 3) I provided a competing tracing (upper left hand corner). Is that all you got? After 17 years mine is still accurate and all the parts fit together in appropriate patterns. Bennett’s anurognathid skull, which you prefer, mistook a maxilla for a giant scleral ring. But the right giant scleral ring was never found. Nor were any giant scleral rings ever found on any other anurognathids. Let me know if and when you find one. 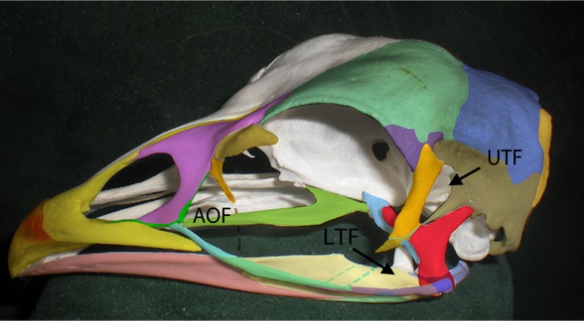 Figure 4. Chicken skull (Gallus gallus) with fused and semi-fused skull bones colorized. Postorbital = orange. Squamosal = tan. Lacrimal = brown. Prefrontal = purple. Quadrate = red. No one else has ever attempted to do something similar.

re: that chicken skull colored photo {FIig 4}: please provide a competing image that shows what a ‘real’ chicken skull is all about. I’d like to know where the errors are so I can fix them. I prefer to use rather than create.

re: genomics vs. phenomics. Didn’t the taxon list in Afrotheria cause you to wonder, even a little bit? Gene studies produce false positives over deep time. You can test it yourself. If an amateur can do it, so can you.

If I forgot to address a favorite criticism, let me know. You guys provided a long list. At present, it’s better to be brief and to the point.

The large reptile tree (1712+ taxa) plus the pterosaur tree and therapsid skull tree all produce cladograms that recover sister taxa that actually look like each other (not like pterosaurs arising from Scleromochlus). All three are constantly being updated as I find errors. The LRT demonstrates you can lump and split 1712 taxa using only 230 multistage characters. That’s a fact. More taxa are more important than more characters. That’s a fact.

This is something the paleo community has asked for. But the order of taxa is not what you asked for. Where is the competing study? If you’ve been sitting on your hands and/or writing to Darren Naish, you’ve been wasting your time. Do what you are paid to do. Or wait until you retire and have gobs of time, like me. — David Peters”