Several taxa tested
in the large reptile tree (LRT, 1710+ taxa; subset Fig. 2) do not remain in the LRT or the MacClade file forever. Typically they are known from very few parts, like a single jawbone. These bits and pieces enter the LRT to see where they nest, and then they exit.

In this case,
Redondavenator quayensis (Nesbitt et al. 2005; Fig. 1; NMMNH P-25615) is known from a partial snout, a partial coracoid and a partial scapula. 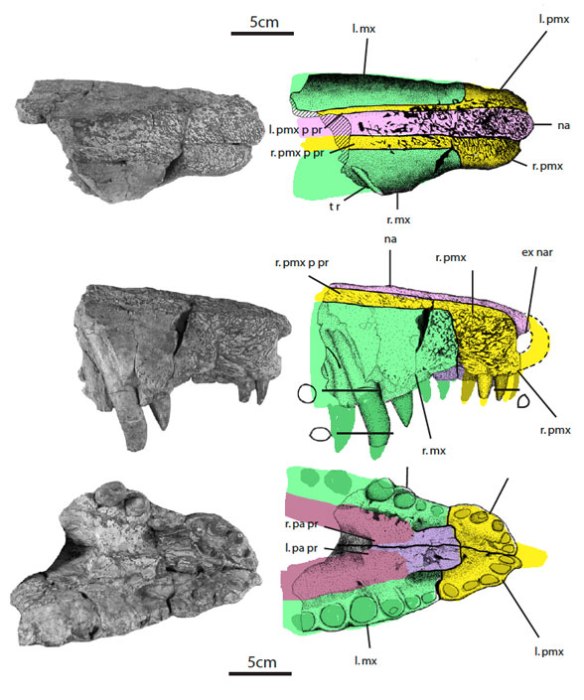 According to the Systematic Position section:
“Redondavenator displays the following two sphenosuchian characters: reduced external naris and nasal is not bifurcated (no descending process).

According to the Palecology section:
“the complete skull of Redondavenator is estimated to be at least 60 cm long.”  That’s six to eight times larger than in sister taxa. “Anterior sculpturing [of the snout elements] has been correlated with semi-aquatic habits as an osteological correlate of dome pressure receptors that sense motion and help orientate the animal in water.” And that may explain the size difference.

Figure 2. Subset of the LRT focusing on Crocodylomorpha. Matching Nesbitt et al. 2005, the LRT nests Redondavenator near the base of the Crocodylomorpha, but several nodes away from Sphenosuchia.

According to Wikipedia,
Sphenosuchia include Sphenosuchus, Hesperosuchus, Dibothrosuchus and the CM 73372 specimen, which does not nest in the Crocodylomorpha in the LRT, but in the Rauisuchia alongside Smok and Teratosaurus. 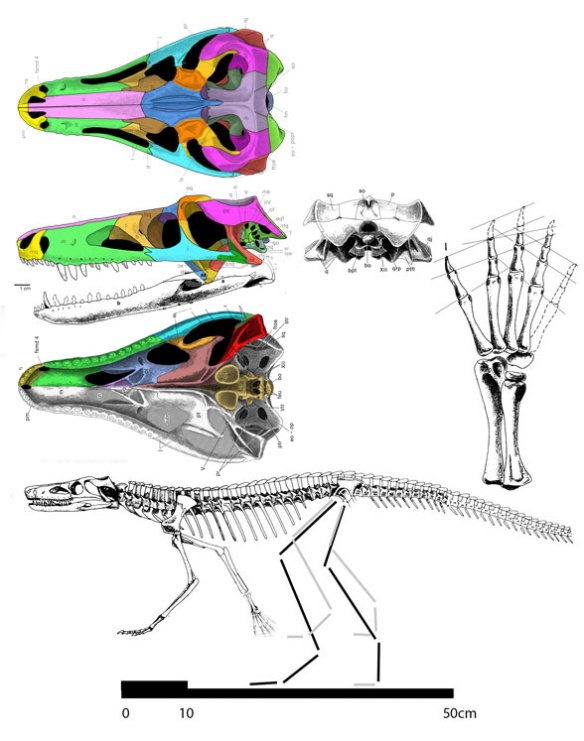 The Wikipedia page on Sphenosuchia does not include
several of the taxa recovered here at the base of the Crocodylomorpha, including  Pseudhesperosuchus and Lewisuchus, taxa that nest on either side of Redondavenator here (Fig. 2). Redondavenator nests close to Dibothrosuchus, but lacks the accessory fenestra between the premaxilla and maxilla, as noted by Nesbitt et al. 2005.

It is important to know where taxa nest,
but if a snout specimen nests close to a post-crania specimen in the LRT, then loss of resolution will result. That is why Redondavenator will not remain within the MacClade file or the LRT. Testing has already indicated its correct node and that node agrees with the original nesting.

Thanks to Dr. Lucas for sending a PDF.