A major issue still facing paleontology and comparative anatomy
is the different names given to homologous bones in fish, reptiles and mammals. For example:

From the genesis of the vertebrate skeleton
in Middle Silurian Birkenia (Fig. 1), a tiny hyomandibular articulates with the intertemporal dorsally and the tiny quadrate ventrally. The hyomandibular, a former dorsal gill arch segment, would ultimately evolve to become the most robust bone in the architecture of certain basal bony fish (Fig. 2) before shrinking in stem tetrapods (Fig. 6), ultimately becoming the stapes in basal reptiles (Fig. 9), and a tiny middle ear bone in mammals and humans.

Figure 1. Birkenia in situ with precursor facial bones labeled. This Middle Silurian taxon is basal to Furcacaudiformes and all other vertebrates.

In the first fish with jaws,
Chondrosteus (Fig. 2) the hyomandibular pivots to thrust the jaws forward during a bite, an action originated in tube-mouth osteostracans and sturgeons.

Figure 1. Chondrosteus animation (2 frames) in situ and reconstructed in lateral view. This is the transitional taxon linking sturgeons to bony fish + sharks.

In the paddlefish ancestor,
Tanyrhinichthys (Fig. 3), the hyomandibular (deep green again) is no longer as mobile.

The hyomandibular becomes a massive immobile element
in the Early Devonian bony fish and spiny shark  Homalacanthus (Fig. 4). It continues to link the intertemporal with the quadrate. 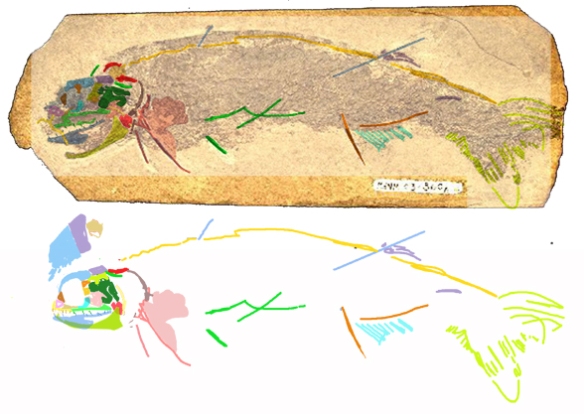 Figure 4. Homalacanthus in situ and reconstructed. The massive hyomandibular is dark green.

In the fish portion
of the large reptile tree (LRT, 1710+ taxa; Fig. x) we’ve just crossed the major dichotomy separating stem lobefins (many of which are still ray fins) from stem frog fish + mudskippers, sea robins and tripod fish, which also use their pectoral fins to walk along the sea floor. (Let’s save that bit of interest for another blogpost). 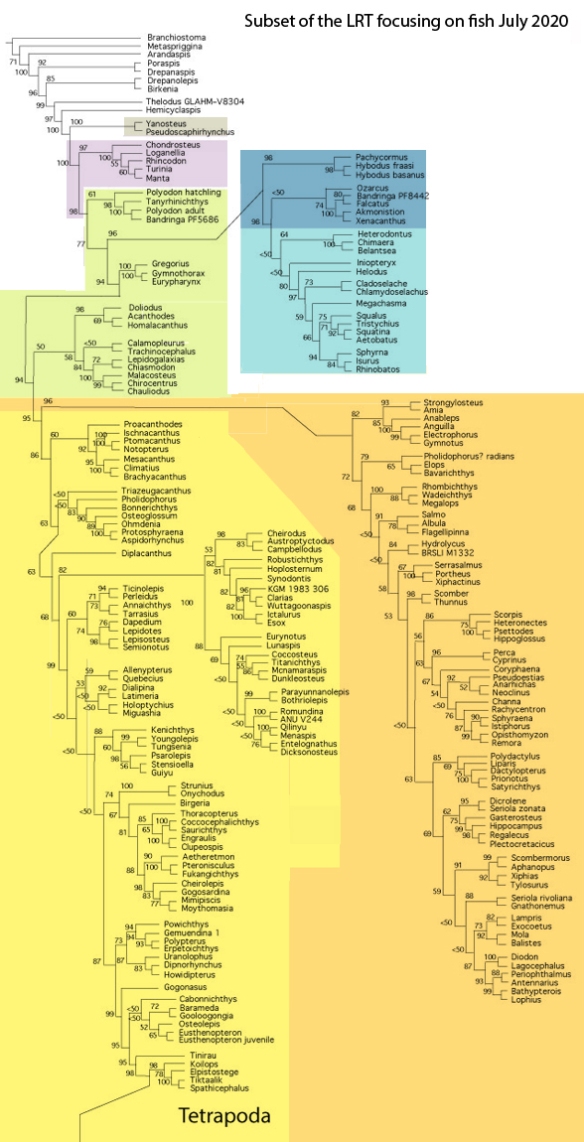 Figure x. Subset of the LRT, focusing on fish for July 2020.

Just across the dichotomy,
the tiny (3cm) spiny shark, Mesacanthus (Fig. 5) has a slender hyomandibular with forked tips. Thereafter the hyomandibular is largely covered up by cheek bones.

In the stem tetrapod and large osteolepid,
Eusthenopteron (Fig. 6) the hyomandibular (dark green) attaches to a largely submerged intertemporal (yellow-green) with little dorsal exposure. The quadrate (red) contact with the hyomandibular is only tentative. 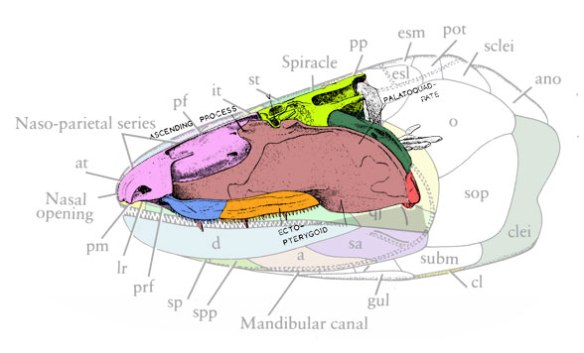 In the flattend skull of a basal tetrapod, like
Laidleria (Fig. 7), the hyomandibular / stapes is horizontal and the intertemporal does not have a dorsal exposure. The quadrate connection is broken as the stapes contacts the small posterior tympanic membrane. 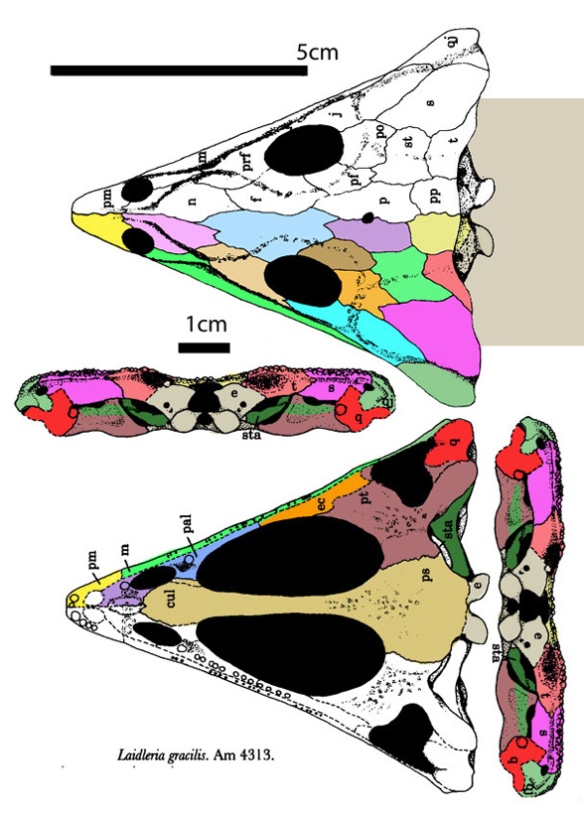 Figure 7. Early tetrapod Laidleria. The intertemporal disappears from the dorsal skull and the hyomandibular / stapes dark green)  is oriented horizontally here, perhaps without a quadrate connection, but note the extent of the stapes in palate view vs. occiput view.

In the aquatic reptilomorph,
Kotlassia (Fig. 8), the hyomandibular / stapes is tiny and oriented dorsolaterally in contact with a large tympanic membrane filling a posterior notch. The intertemporal reappears on the dorsal surface of the skull and expands internally to form the paraoccipital process (opisthotic). 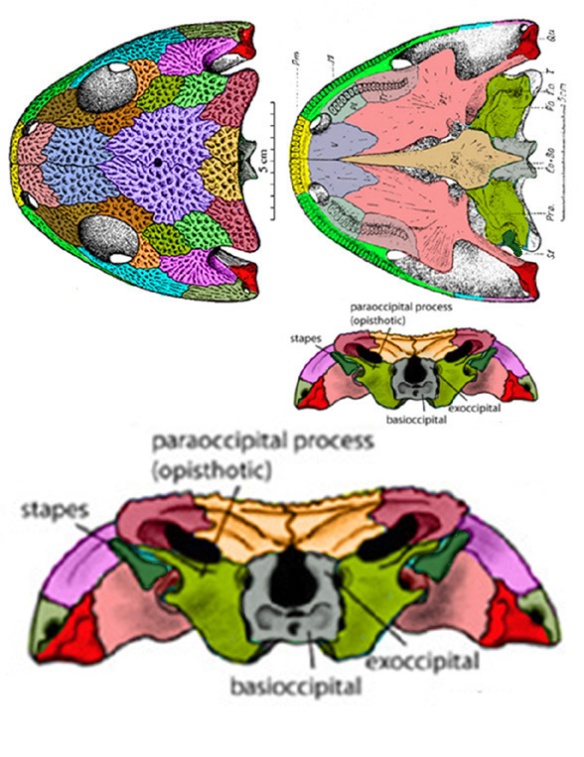 Figure 8. The reptilomorph, Kotlassia, skull. Note the reappearance of the intertemporal here called the opisthotic in occipital view. The hyomandibular / stapes is tiny and dark green. The stapes contacts the tympanic membrane laterally.

In the basal and fully terrestrial archosauromorph,
Paleothyris (Fig. 9), the intertemporal is no longer exposed on the dorsal surface, but is exposed in occipital view, where it is called the opisthotic. The otic notch is now absent as the eardrum is reduced and relocated posterior to the jaw hinge. The former robust hyomandibular continues thereafter to shrink, becoming more sensitive to eardrum vibrations enabling a greater range of sound frequencies to be transmitted to the inner ear and brain. 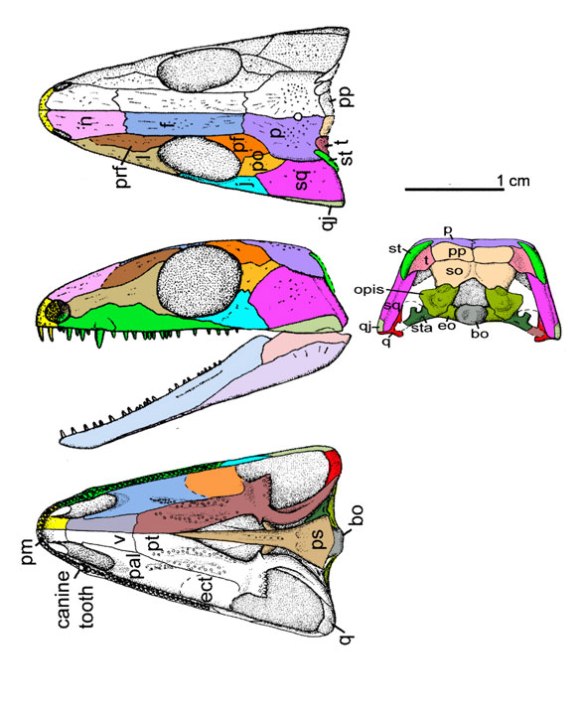 On a slightly different subject:
bone misidentification by Thomson 1966
has been something of a problem ever since that publication. Here (Fig. 10) are the original bone IDs along with revised IDs on separate frames. Principally the relabeled intertemporal and parietal move behind the dorsal braincase division (Fig. 11).

Figure 10. Ectosteorhachis skull from Thomson 1966 with layers to show the brain case and palatoquadrate. Some bones are relabeled in the revised view. Note the intertemporal becomes the prootic + opisthotic at this point. 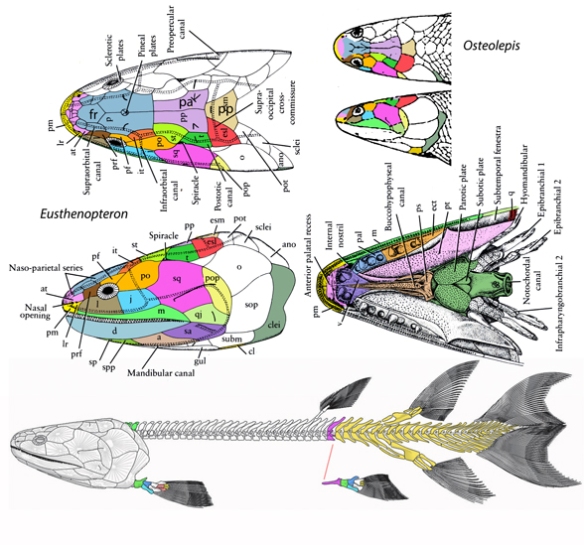 Why is this so?
Under this new labeling system the contact between the intertemporal and hyomandibular is maintained (Figs. 6, 10). Outgroups to these taxa, like Cheirolepis (Fig. 12) likewise run a portion of the postorbital over the orbit, separating the postfrontal from the orbit margin. Now the ostelepids follow that trait despite the two-part postorbital. 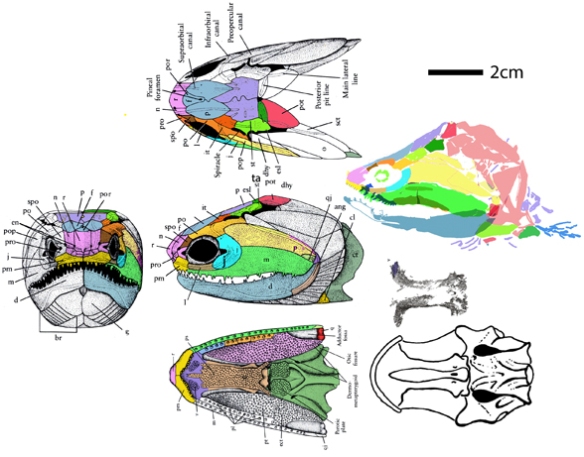 Figure 12. Cheirolepis is an outgroup taxon to the ostelepids that includes a postorbital that extends over the orbit, separating the postfrontal from the orbit margin.

In earlier posts
on hyomandibular evolution. and juvenile Eusthenopteron (Fig. 13; Schultze 1984) corrections have now been made. This bit of relabeling is a new hypothesis awaiting confirmation from others. At present phylogenetic bracketing (Fig. 12) supports this interpretation.

Figure 1. Eusthenopteron juvenile in situ from Schultze 1984. Large plate ventral to the mandible overlaps a convex ventral margin. The quadratojugal is not labeled here. Several bones are re-labeled here.

For those interested,
these changes affected only 4 character traits out of 238. These scoring changes did not affect the tree topology.

Schultze H-P 1984. Juvenile specimens of Eusthenopteron foordi Whiteaves, 1881 (Osteolepiform Rhipidistian, Pisces) from the Late Devonian of Miguasha, Quebec, Canada. Journal of Vertebrate Paleontology 4(1):1–16.
Thomson KS 1966. The evolution of the tetrapod middle ear in the rhipidistian-amphibian transition. American Zoologist 6:379–397.
Westoll TS 1943. The hyomandibular of Eusthenopteron and the tetrapod middle ear. Transactions of the Royal Society B 131:393–414.