Baron 2020 discusses
the origin of dinosaurs (Fig. 1) in the Late Triassic of South America.

From the abstract
“Whilst the interrelationships between the major dinosaur clades remains to be fully resolved, the current data does seem to comprehensively answer the question of where the dinosaurs first originated.”

Actually
the dinosaur clades have been fully resolved for several years in the large reptile tree (LRT, 1707+ taxa). South America is where the last common ancestor of the dinosaurs, and all the proximal outgroups to that taxon reside (Fig. 1). We know dinosaur ancestors back to Cambrian chordates. So it is time to move on from questioning dinosaur origins. We’ve known this for several years. Academia needs to catch up.

Baron cites
(Baron et al., 2017a) as “a large scale study of early dinosaurs and their closest kin posed the first serious challenge in modern times to the traditional model of early dinosaur evolution and interrelationships.” Baron then and now omit a citation for a larger scale study first posted here in 2011 when Daemonosaurus (Sues et al. 2011) was described. Baron et al. 2017 were repositioning Chilesaurus as an early orninithischian and claiming credit for a hypothesis of interrelationships first posted here online two years earlier in 2015.

Baron was made aware of these earlier citations
via email, but chose to ignore them yet again. The earlier citation should always get the credit, no matter the circumstances. The resurrected clade ‘Ornithoscelida’ (Baron et al. 2017) is not support when more taxa are added.

After reviewing other competing hypotheses, Baron confesses,
“This lack of current overlap between datasets and taxon sampling has had a detrimental overall effect on our understanding of early dinosaur evolution and has offered very little by way of a solution to the any of issues still outstanding. The author recognises his own failing in this respect and would further seek to draw attention the fact that the original ‘challenge’ to a Southern Hemisphere point of origination was speculative, rather than robustly supported by data.”

Notably, none of these studies
included basal bipedal crocodylomorphs, which nest as the proximal outgroup taxa to the Dinosauria + Herrerasauridae in the LRT. Rather, Baron’s consensus tree includes:

So taxon exclusion
remains the problem here. And face it, sometimes it takes an outsider to see problems PhDs and textbook writers surround themselves with by wearing blinders. As I discussed in Facebook recently with a famous dinosaur artist, most people follow the money and do what is popular and accepted. It’s better to follow the science. Science will catch up to popular myths sooner or later. 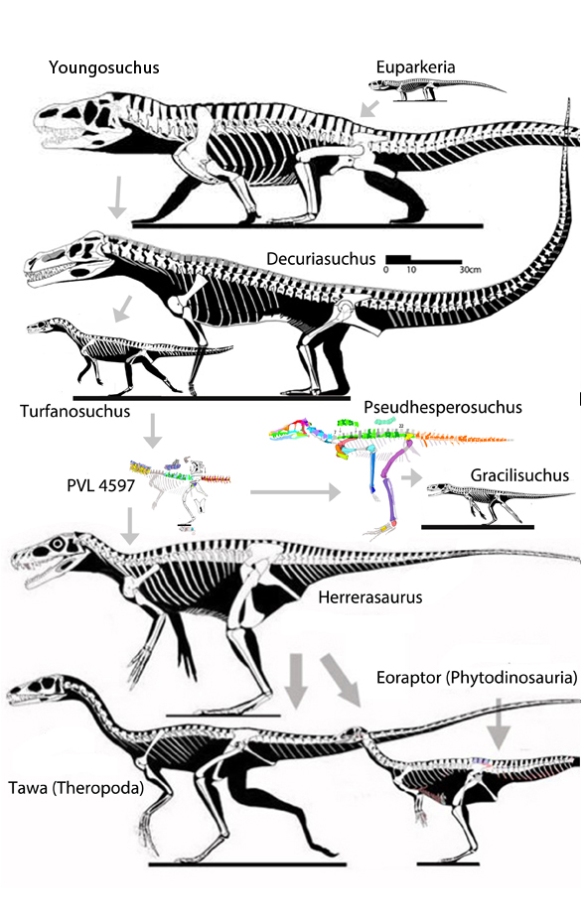 Figure 1. The origin of dinosaurs in the LRT to scale. Gray arrows show the direction of evolution. This image includes Decuriasuchus, Turfanosuchus, Gracilisuchus, Pseudhesperosuchus, Herrerasaurus, Tawa and Eoraptor.  Note the phylogenetic miniaturization at the origin of Archosauria (Crocs + Dinos). These are the taxa studies need to include while they exclude Silesaurus and pterosaurs.

Baron 2020 offers some suggestions
“First, to try and resolve the issue relating the topology within the dinosaur lineage, the datasets produced in each of the various analyses discussed above should be combined and an effort made to consistently score all species using a standardized set of definitions for anatomical characters and character states.”

“Second, and most importantly, it is only through the full incorporation of data from newly discovered species both within and without Dinosauria, that more confidence could be placed in our understanding of the geographic setting of the common ancestor of all dinosaurs.”

Yes. Adding taxa will solve this problem. Follow the example of the LRT.

“Another substantial omission of most studies of this kind are pterosaurs. Pterosauromorpha is a clade of flying Mesozoic reptiles that are very closely related to the dinosaurs, forming with them the clade Ornithodira.”

No. That’s a myth. Adding taxa removes pterosaurs from dinosaurs and nests them with lepidosaurs. We’ve known this since 2007, but textbooks must be sold.

“As a final point, it is worth remembering that during the Late Triassic, every continent was united into a single landmass, Pangea.”

True! Even so, you have to include more basal bipedal crocs and a raft of other taxa to figure out who is in and who is out. That’s where the LRT can be more than helpful. The debate is over when you have minimized taxon exclusion, as in the LRT.

Bottom line:
Baron and other workers choose their taxa. The LRT recovers taxa for you. Take the bias, myth and tradition out of the equation.