Summary for those in a hurry:
Specimens nesting at the base of the marine and terrestrial younginiforms need a good review, as in a doctoral dissertation. Many of the specimens below have not been described and the collection has not been tested in a phylogenetic analysis, except here in the LRT. And let’s not forget headless Galesphyris (Fig. 4), the last common ancestor of this monophyletic clade of (at present) wastebasket “young-” younginids (Youngina, Youngolepis and Youngoides) needs to be part of the picture. The Late Carboniferous diapsid, Spinoaequalis (Fig. 2), is the outgroup taxon in the LRT.

A new ‘Youngina’ specimen came to my attention
(Fig. 1) published in Sues 2019. Unfortunately no museum number was provided. Pending acquisition of that number, the new specimen was added to the large reptile tree (LRT, 1694+ taxa) just to see where the new one would nest among the many Youngina, Youngoides and Youngolepis specimens (Figs. 2, 3) already in the LRT. Scale bars indicate it’s a big one.

Figure 1. Unidentified specimen attributed by Sues 2019 to Youngina capensis. Here it nests to scale with the much smaller BPI 375 specimen basal to protosaurs, like the AMNH 9520 specimen assigned to Prolacerta.

Relatively few workers
have published on the Youngina, Younginoides and Youngolepis specimens. That is unexpected considering the key position in the LRT of these largely ignored taxa at the bases of several major clades. 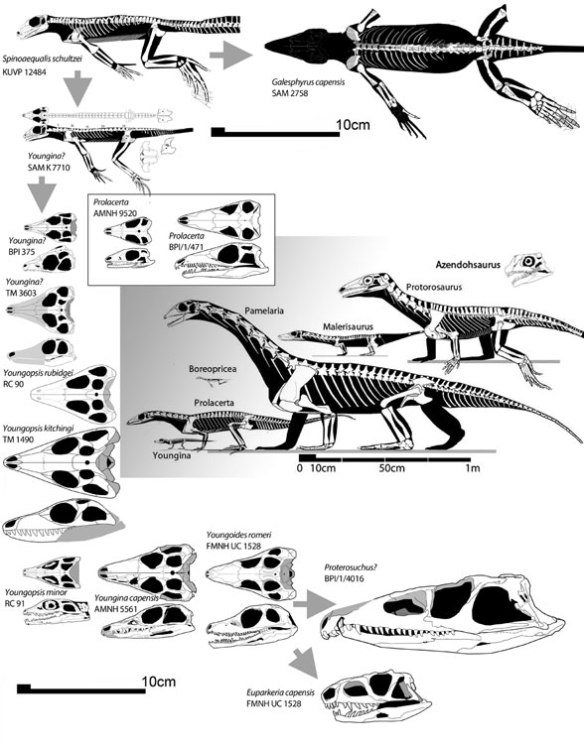 Figure 2. Terrestrial Yonginiformes + Galesphyrus representing the marine clade, all to scale except the toned area containing protorosaurs, which have their own scale.

One traditional Youngina specimen,
short-legged BPI 3859, does not nest with the terrestrial taxa in the LRT, despite the many similarities.

Figure 3. The odd one out, the BPI 3859 specimen assigned to Youngina does not nest with the others, but with marine taxa.

However,
if headless Galesphyris turns out to be a junior synonym of Youngina, then the genus would be monophyletic across tested taxa. Let’s leave open that possibility. Otherwise, let’s rename them all appropriately.

Figure 4. If Galesphyrus was Youngina, the genus would be monophyletic.

At nine cm in length, the skull of the new specimen
is the largest skull assigned to the genus Youngina. Like the smaller BPI 375 specimen, it nests basal to protorosaurs in the LRT. Other specimens nest basal to Archosauriformes. As noted above, the BPI 3859 specimen nests basal to Claudiosaurus in the LRT along with other marine younginiformes, including plesiosaurs, mesosaurs and ichthyosaurs.