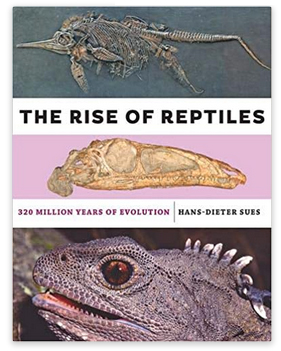 A new book on evolution,
‘The Rise of Reptiles’ (left), came out last August 2019. Unfortunately, it took this long to come to my attention.  After a short bio on author, Dr. Hans-Dieter Sues, several reviews follow.

According to Amazon.com, author Hans-Dieter Sues is
“a senior scientist and curator of fossil vertebrates at the Smithsonian’s National Museum of Natural History. He is a coauthor of Triassic Life on Land: The Great Transition.”

Amazon.com called ‘The Rise of the Reptiles’,
“The defining masterwork on the evolution of reptiles.”

John Long, Finders University, called it,
“A valuable reference book―entertaining read and beautifully illustrated―about how reptiles first evolved and diversified into many lineages, including the one leading to us mammals. The Rise of Reptiles is essential reading for every evolutionary biologist.”

Michael J. Benton, University of Bristol, reported,
“The writing style is clear and easy, the illustrations are excellent, and the whole design and print quality highly attractive. There is no other book like it, and this will stand as a useful reference for many years.”

Jeremy B. Stout, Quarterly Review of Biology, called it,
“The most complete and current compendiumon reptilian evolution and diversity to date… Few (if any) are better suited to have written this volume than Sues. His impressive research record over the past 40 years has dealt directly with many of the taxonomic groups in this volume, including (nonreptile) synapsids, parareptiles, sauropterygians, crocodylomorphs, and dinosaurs.”

After scientifically testing the various hypotheses put forth by Sues
in the Large Reptile Tree (LRT, 1680+ taxa) his book was found to promote many of the traditional myths and misconceptions that have befuddled reptile cladograms for the past decade. Virtually all of the problems in ‘The Rise of the Reptiles’ can be attributed to too few taxa in the various cited phylogenetic analyses.

Starting with outgroups, Sues reports,
“The group generally considered most closely related to amniotes is Diadectomorpha.” He cites papers from 1980, 2003 and 2007.

Using the last common ancestor method, the tested out-group to the clade Reptilia in the LRT (2020) is the Reptilomorpha. This clade includes the long-limbed taxon, Gephyrostegus, a late survivor from an earlier, probably Late Devonian, radiation. When more taxa are added diadectomorphs nest well within the Lepidosauromorpha branch of the Reptilia (Fig. 5), contra Sues 2019.

Dr. Sues “Pulls a Larry Martin” when he reports
on a few traits he notes are present in his short list of stem-amniote ‘outgroups’.

Those outgroups (diadectomorphs, which are ingroups in the LRT) were gleaned from old studies. Look what happens when you don’t have the correct outgroups and correct last common ancestors. The traits you observe are going to be wrong because you’re not even looking at the correct node. Never rely on a few traits to define a clade. Always rely on the ‘last common ancestor’ method to determine clade membership. And don’t exclude pertinent taxa!

Figure 2. “Classification” of reptiles according to Sues 2019. Color overlay note differences when more taxa are added, as in the LRT.

Sues reported on ‘the oldest known reptile, Hylonomus‘ 323-315mya,
but that was based on a pre-cladistic 1964 study. Sues then hedged that ‘undisputed’ report with two ‘recent phylogenetic analyses’ (1988 and 2006) that, “instead found these taxa [Hylonomus + Palaeothyris] closely related to diapsid reptiles.”

Figure 3. Reptilia vs. Amniota in Sues 2019 compared to the LRT.

Sues cites Tsuji and Müller (2009) who defined ‘Parareptilia’ as
“the most inclusive clade containing Milleretta and Procolophon, but not Captorhinus” and that clade includes such diverse taxa as mesosaurs and pareiasaurs (Fig. 4).

If those two are related, that’s a Red Flag. In the LRT mesosaurs nest with similar pachypleurosaurs and other marine diapsids. Pareiasaurs give rise to turtles. As defined, the clade ‘Parareptilia’ is paraphyletic at worst, and a junior synonym of Reptilia at best in the LRT, which includes a wider gamut of taxa.

Figure 4. Parareptilia according to Sues 2019.

Similar problems
attend the cladogram of ‘Eureptilia’ in Sues 2019 (Fig. 6).

More taxa solve this problem, too.

Figure 5. Simplified cladogram of the Reptilia according to Sues 2019 (below in white) compared to a simplified version of the LRT using the same taxa. More taxa reveal an earlier dichotomy that creates two diapsid-grade skull morphologies.

Dr. Sues has no idea how reptiles diverged
from their Viséan (or earlier) initial radiation. This could have been repaired if he had simply added taxa to his own analysis, rather than relying on published academic papers published decades ago with the same flaws. 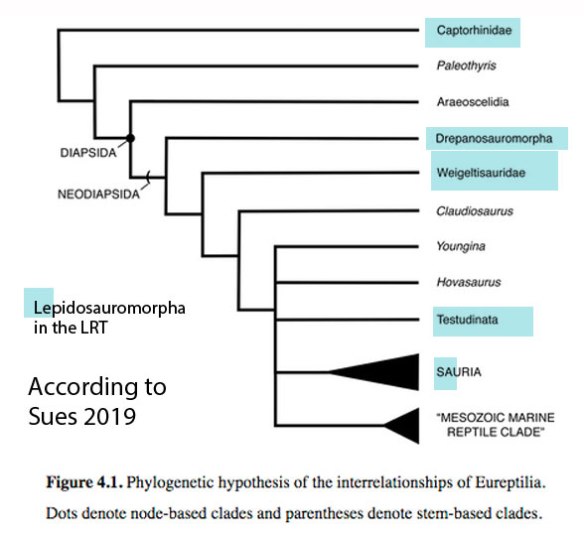 Figure 6. The ‘Eureptilia’ according to Sues 2019. This is a paraphyletic clade when more taxa are included, as in the LRT. Since the invalid clade ‘Sauria’ includes lepidosaurs and archosaurs it is half colored blue.

Other than cladograms, Sues 2019
also presents photos and diagrams (Fig. 7). Unfortunately some diagrams don’t match the fossils, leading to confusion at best.

Figure 7. Figure from Sues 2019 showing Youngina capensis and a diagram of the same, that does not match the fossil. DGS color overlay added for comparison. What is the specimen number for this specimen?

Exposing and overturning old and new reptile mythology
is what PterosaurHeresies.Wordpress.com is all about as it supports the website www.ReptileEvolution.com and its centerpiece, the growing online cladogram at: www.ReptileEvolution.com/reptile-tree.htm. A wide-gamut cladogram is a powerful tool providing evidence against invalid traditional hypotheses that exclude pertinent taxa.

I cannot recommend this book.