Bats are inverted bipeds.
They hang by branches and cave walls by their feet. While inverted, bat forelimbs are folded away until needed for flight. The hind limbs frame membranes linking the laterally oriented legs to the medial tail. We looked at the origin of bats from non-volant ancestors earlier here, here and at several earlier links therein (also see Fig. 3).

Figure 1. Hind limbs and closeup of ankle of Cynopterus, an extant micro bat, from Digimorph.org. Colors and diagram elements added here. Unlike most mammals, the knees are often above the hips in bats.

Bat experts know this, but it  comes as news to me.
A closer examination of bat hindquarters (Fig. 1) reveals two axial twists that add up to a ~180º rotated hind limb for the micro bat Cynopterus. The ankle is capable of additional rotation.

Figure 2. Two views of a bat femur animated to show typical untwisted orientation of femoral head as found in most mammals.

Axial torsion in proximal bones ultimately produces a pes
that is dorsal side up in flight in derived extant bats. Based on these twists, bat knees appear to bend backwards compared to other mammals.

Figure 3. The basal bat, Onychonycteris. The feet are smaller and the hind limbs are more gracile primitively, like those of the bat precursor, Chriacus in figure 3.

In the transitional basal bat
Onychonycteris, the hind limb appears to be laterally oriented with long gracile hind limbs and the dorsal side of the tiny pes likewise oriented laterally. If you think such tiny feet seem less capable of inverted clinging compared to the relatively big feet of Cynopterus (Fig. 1), you’re being observant. But long legs and small feet are primitive for bats. So is inverted bipedal hanging. What you’re seeing is a transitional phase.

Figure 4. Hypothetical bat ancestors arising from a sister to Chriacus, which may be a large late survivor of a smaller common ancestor. Imagine stem bat 3 and Onychonycteris pinching the branch they hang from with long legs acting like pliers, an idea that did not occur to me years ago when this was illustrated.

Rather than clinging to the same side of the twig (or cave wall)
the long legs and small feet of Onychonycteris acted more like tongs or pliers, pinching both sides of a branch medially between them. We also see this in primitive micro bats, like long-tailed Rhinopoma and primitive megabats, like Balionycteris (Fig. 5).

Figure 5. Balionycteris, the smallest megabat, hanging from both sides of a slender branch by laterally-twisted small feet.

Is there any new process on the bat pelvis that facilitates such adduction?
Yes. The pubis often develops a bump or rod, a prepubic process, analogous to the prepubis in pterosaurs. This process anchors muscles of femoral adduction.

Colugos and pangolins
also hang inverted from branches like that, with feet on both sides of a supporting branch.

The outgroup to bats in the LRT,
Chriacus, (Fig. 4) does not preserve evidence of long bone axial torsion (the mid-portion of the femur is not preserved). The acetabulum does not open dorsally.

Hanging upside-down
is something nearly all small arboreal mammals (e.g. squirrels, tree shrews, monkeys, tree opossums) can do facilitated by a flexible ankle that ensures the claws attach to the bark at any angle. Only bats and their immediate ancestors had such a firm toe grip while inverted they no longer needed their hands to grip. That freed the forelimbs to evolve into infant nurseries and parachute-like wings, not quite like those of birds and pterosaurs (Fig. 5), which were bipedal the conventional way: right side-up. 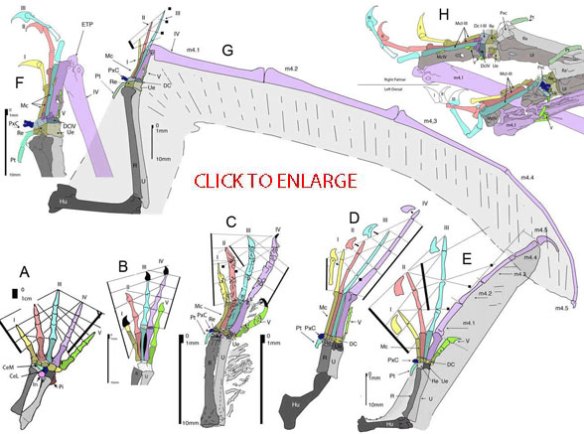 Figure 6. Click to enlarge. The origin of the pterosaur wing and the migration of the pteroid and preaxial carpal. A. Sphenodon. B. Huehuecuetzpalli. C. Cosesaurus. D. Sharovipteryx. E. Longisquama. F-H. Bergamodactylus.

The axial rotation of long limb bones is rare in tetrapods,
but it also can be seen in metacarpal 4 of Sharovipteryx, Longisquama and basal pterosaurs like Late Triassic Bergamodactylus (Fig. 6). That twist facilitates wing (finger 4) folding in the lateral plane of the wing (Peters 2002) rather than against the palm as in other tetrapods, including bats. Apparently the storage of long wings was just as important as the evolution of the long wings themselves in all volant tetrapods.

2 thoughts on “How bat feet turn laterally, then upside-down”