Toothy jaws from toothless jaws?
That seems to break some rules. And if the LRT (Fig. 3) is valid, that makes toothed Cretaceous birds crown bird taxa. 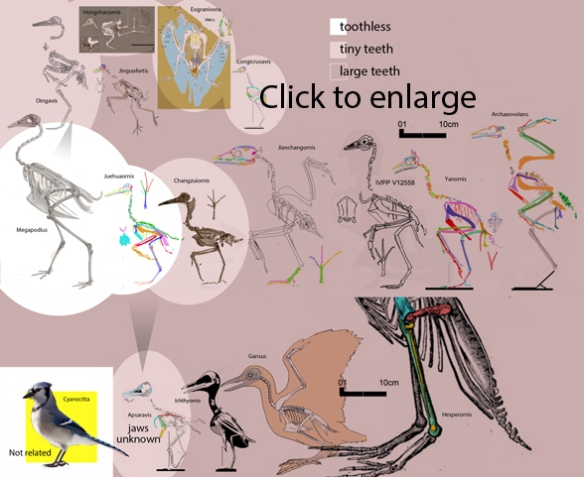 Figure 1. Click to enlarge. Toothed birds of the Cretaceous to scale. They are derived from toothless taxa.

One look
(Fig. 1) at the similarity of Megapodius to basal Cretaceous toothed and toothless birds, like Juehuaornis (Figs. 1, 4), makes the relationship obvious. The LRT recovered that relationship based on hundreds of traits and minimized convergence by testing relationships among 1659 taxa.

How is that possible? Consider this:
Juehuaornis is smaller than Megapodius. The sternum and keel of Juehuaornis are smaller than in Megapodius. Why is this important? As we learned earlier, at the genesis of many major and minor clades phylogenetic miniaturization (the Lilliput Effect) is present. That’s how gulls become hummingbirds and rauisuchians become dinosaurs. When adults are smaller they mature more quickly and they retain juvenile traits into adulthood. They also develop new traits, in this case, perhaps ontogeny recapitulated phylogeny.

The tooth genes got turned on again,
at first in a minor way… later in a major way.

Figure 2. Click to enlarge. Origin of birds from Archaeopteryx to Megapodius. Pseudocrypturus is the sister taxon to the kiwi (Apteryx, Fig. 3), the most basal crown birds, but Juehuaornis is known from much older fossils despite being more derived than Megapodius.

How close were Cretaceous toothless taxa,
like Juehuaornis, to toothed Jurassic ancestors, like Archaeopteryx? Depends on how you look at it.

Morphologically
toothless Juehuaornis follows toothless Megapodius (Figs. 1, 3) and is separated from toothy Archaeornithura by at least three taxa (Figs 2, 3). The question I ask is: did the Cretaceous sisters to these toothless taxa have teeth subsequently lost in later generations over the past 140 million years? Or were teeth lost in  Early Cretaceous transitional taxa (represented by late-survivors (Fig. 2)) only to be regained in the toothy extinct clade (Fig. 3)? For now, let’s leave all options open, but toothlessness followed by toothy jaws is the only option currently supported by phylogenetic evidence (Fig. 3).

Figure 3. Subset of the LRT focusing on bird origins. Crown birds and toothed birds are highlighted.

This is what happens when you let the cladogram tell you what happened,
rather than gerrymandering the taxa inclusion list and scores to get the results your professors and colleagues will approve and permit publication.

Figure 4. Juehuaornis reconstructed. Note the scale bars. This is a tiny bird and the oldest known crown bird.

I should have reported
that Juehuaornis (122 mya) was the oldest known crown bird earlier. I just had to see the toothed birds in phylogenetic order (Fig. 1), making sure they made sense after seeing them listed in the cladogram (Fig. 3).

Add taxa
and your cladograms will be better than most. Create reconstructions to scale and see if your cladograms make sense. When it’s right, it all works out with a gradual accumulation of traits between every node, echoing evolutionary events from deep time. Let me know if this novel hypothesis of interrelationships was published previously anywhere so that citation can be promoted.