Cloutier et al. 2020 bring us
a new complete specimen of Late Devonian Elpistostege (Fig. 1) along with CT scans of the manus-in-the-lobefin revealing finger buds inside (Fig. 2). Despite these buds, Elpistostege had no elbows (Fig. 2) and was too large (relative to its small posteriorly-oriented fins) to support itself above the substrate. That would come later. Meanwhile it could have wriggled ashore, insured from tipping over by its wide body and low center of gravity.

Cloutier et al. focused on the fingers,
providing an external view and CT scans, colored like a diagram (Fig. 2). I added pastel colors to the four fingers that extend beyond the more numerous nascent metacarpals. Even at this early stage, parallel interphalangeal lines (PILs) can be drawn where phalanges work in sets during extension and flexion. 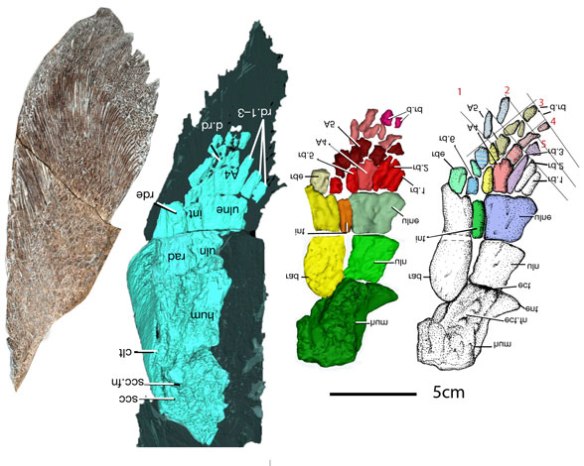 The skull presents a bit of a tracing challenge
as the rostrum is largely missing here (Fig. 3).

Figure 3. Elpistostege skull from Cloutier et al. 2020 with colors added. Note much of the rostrum is lost.

The large reptile tree
(LRT, 1658+ taxa, subset Fig. 4) tests more taxa than the traditional cladogram published in Cloutier et al. 2020. They nest Panderichthys as the more basal taxon. In the LRT Panderichthys is more derived (also see Fig. 5). Missing from Cloutier et al. are Spathicephalus (a sister to Tiktaalik) and Koilops, a neotonous form basal to Elpistostege and the rest of the Tiktaalik clade. In the LRT that’s an offshoot clade from the main line of fin to fingers taxa. Trypanognathus has the phylogenetically first known fingers, but that LRT hypothesis of relationships has been overlooked in favor of the multi-digit taxa, Acanthostega and Ichthyostega.

Figure 4a. Subset of the LRT focusing on basal tetrapods. Note the displaced positions of Acanthostega and Ichthyostega.

Figure 4b. Traditional cladogram produced by Cloutier et al. 2020. Compare to Figure 4a.

Traditional transitional taxa,
like Tiktaalik, Acanthostega and Ichthyostega, are phylogenetically shifting off to the side at various nodes in the LRT. Other taxa that never get talked about (Fig. 4) are more in the main line of tetrapod evolution leading to reptiles. Cloutier et al. seem to be perpetuating the traditional myth that basal tetrapods had more than five fingers (corrected in Fig. 5). The evidence shows that four is the primitive number. We looked at basal tetrapod finger evolution earlier here. and here.

Figure 5. Manus/Fin diagram from Cloutier et al. Two frames change every five seconds. The phylogenetic order is wrong and Tulerpeton is not related (in the LRT). Greererpeton is substituted. 4 fingers is the primitive number. Note the shrinking ulnare  in the revised version. Tiktaalik is off the main line of tetrapod evolution.

Figure x. The fin to finger transition in the LRT with the addition of Elpistostege.