Schoch and Sues 2019 once again bring us
their invalidated scenario for the origin of turtles (= Odontochelys and Proganochelys) from traditional ancestors Pappochelys, Eunotosaurus and Eorhynochelys (Fig. 1, bottom) that nest elsewhere in the large reptile tree (LRT, 1612+ taxa; subset Fig. 5), which tests these taxa AND pertinent taxa that Schoch and Sues ignore.

Unfortunately,
Schoch and Sues 2019 do not examine and describe the actual ancestors of turtles recovered by the LRT, Stephanospondylus, Bunostegos, Elginia and Sclerosaurus. And because of this they do they do not realize that turtles had a dual ancestry within small, horned pareiasaurs (Fig. 1). Instead, Schoch and Sues cherry-picked their taxa and made up a ‘just-so’ story.

Schoch and Sues are not aware of ‘The Big Picture’
that the first dichotomy splitting all reptiles is the Lepidosauromorpha / Archosauromorpha split. Instead they rely on traditional tree topologies (many of them invalid genomic studies) that do not go back to the origin of reptiles and do not include pertinent taxa. Uncritically they rely on the flawed work of others.

Schoch and Sues do not realize
how rampant convergence is within the Tetrapoda, including the Reptilia. They do not realize that only a wide gamut phylogenetic analysis that recovers a well-resolved tree can correctly nest taxa. Instead they ‘pull a Larry Martin’ and hope the traits and taxa they pick are correct. They are not correct based on testing a wider gamut of taxa in the LRT.

The LRT tells a better ‘just-so’ story
because it does not omit key taxa. And it nests the ancestors hanbd-picked by Schoch and Sues far from turtles on the LRT.

When Pappochelys was added to the LRT,
(Fig. 2) it nested at the base of the Placodontia along with Palatodonta, between Diandongosaurus and Palacrodon and the rest of the placodonts, some of which also had broad ribs and gastralia, all far from turtles. Some placodonts even became turtle mimics.

Figure 2. Pappochelys compared to placodont sister taxa and compared to the Schock and Sues reconstruction, which appears to have several scale bar errors and underestimated the number of dorsal vertebrae. Click to enlarge. So few ribs and vertebrae are known for Pappochelys that their order, size and number could vary from that shown here. Note the ribs of Paraplacodus are also expanded. The number of dorsal vertebrae is unknown and probably more than nine based on sister taxa.

Shoch and Sues 2019
discuss several hypotheses from a hundred years ago or more. They report, “Goodrich (1916) already considered it likely that the absence of temporal openings in turtles represented a secondary condition. His hypothesis has received strong support from the discovery of the Middle Triassic stem-turtle Pappochelys, which has two clearly defined temporal openingson either side of the cranium (Schoch & Sues 2015, 2018).” Seems to fit their scenario, so why not? Testing other candidates (Fig. 1) was apparently never considered.

Not sure why Schoch and Sues keep pursuing this myth.
This is John Ostrom’s lament. Paleontology has always moved at a snail’s pace. Why? Perhaps because workers avoid testing previously published papers and cladograms. It’s not that much work. All they have to do is add taxa, like I do, and the software does the rest.

When the turtle mimics,
Eunotosaurus (Fig. 6) and Eorhinchochelys (Fig. 7), were added to the LRT, they nested together, but with Acleistorhinus and Microleter, taxa also omitted from Schoch and Sues 2019.

Figure 3. Shoch and Sues compared Pappochelys to Odontochelys and Proganochelys, but deleted the more primitive Eunotosaurus. And it’s easy to see why. Eunotosaurus has wider ribs than its two purported successors. That and the LRT tell you its not a turtle, but a turtle mimic. Note the inaccuracy Schoch and Sues applied to their Odontochelys. The version from ReptileEvolution.com appears in frame 2 of this GIF animation. 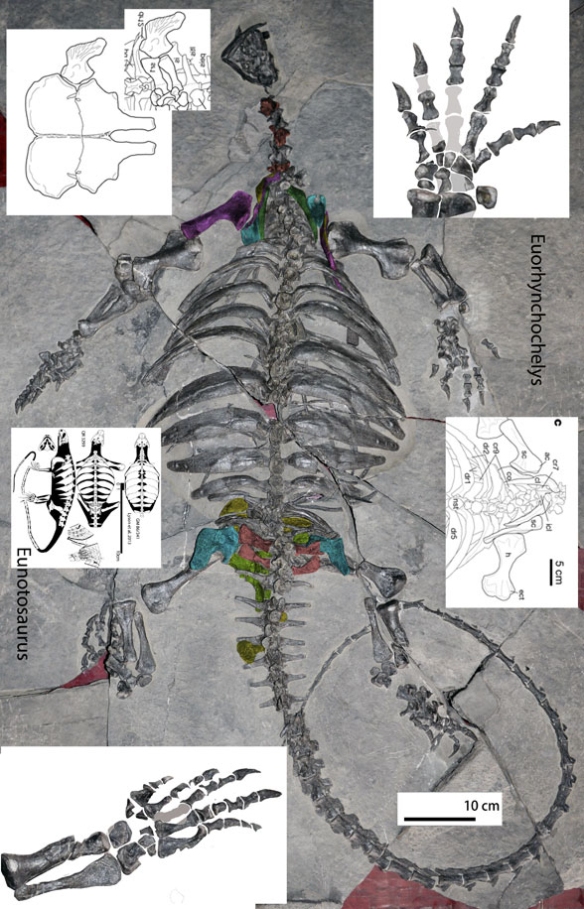 Unfortunately
Schoch and Sues do little first hand testing, they rely on genomics and, worst of all, omit taxa that are key to understanding turtle origins (Fig. 8).

Figure 5. Subset of the LRT focusing on turtle origins and unrelated eunotosaurs. Pappochelys nests on a completely different branch of the Reptilia, the Archosauromorpha, close to the base of the Enaliosauria.

Ironic (= by convergence)
that I the updated turtle video came out a few days ago. Here it is again.

I still find it wondrous
that soft-shell turtles and hard-shell turtles evolved so many trait in parallel with roots among the small horned pareiasaurs. It’s all so obvious once you get them together.

Read the ResearchGate.net paper on the dual origin of turtles here.