Figure 1. Tanystropheus in a vertical strike elevating the neck and raising its blood pressure in order to keep circulation around its brain and another system to keep blood from pooling in its hind limb and tail.

Formoso et al. report,
“Tanystropheids are a unique group of archosauromorph reptiles, which likely appeared in the Late Permian (based on inferred ghost lineages) and diversified within five million years after the end-Permian extinction.”

By contrast
the LRT nest tanystropheids as sister taxa to pterosaurs, some of which had similar elongated cervicals, all derived from basal tritosaurs like Huehuecuetzpalli, Bavarisaurus macrodactylus and Tjubina. The protorosaur, Ozmik, had elongate cervicals. None of these are mentioned in the text. Strangely there is also no citation for Fuyuansaurus and Pectodens, the basalmost taxa in the Tanystropheus clade in the LRT (subset Fig. 2). They are all Middle Triassic taxa, as are all the macrocnemids. The only known Late Permian taxa in the LRT lineage of Tanystropheus are the basal arboreal lepidosauriformes, Saurosternon and Palaegama.

So where does this
“likely appeared in the Late Permian” supposition come from?

The authors uncritically cite Sennikov 2011
who mistakenly placed his tanystropheid, Augustaburiania vatagini, in the Early Triassic, perhaps based on Sennikov’s earlier similar mistake with regard to the coeval sauropterygian Tanaisosaurus kalandadzei. No other sister taxa for either taxon predate the Middle Triassic. Sennikov describes, “The Triassic beds of the Lipovskaya Formation are eroded, overlie Carboniferous marine limestones, and are covered by Middle Jurassic continental sands and clays.” Based on phylogenetic bracketing, the Lipovskaya is a Middle Triassic formation.

De Oliveira et al. 2018 report,
“The fossil assemblage of the Sanga do Cabral Formation so far includes procolophonids, temnospondyls, and archosauromorphs. Vertebrate fossils are often found isolated and disarticulated. This preservation mode suggests extensive exposure and post-mortem transport of bones during the biostratinomic phase, and subsequent reworking after diagenesis.”

A Middle to Late Triassic time window for tanystropheids
is best supported here, along with a call for better editing among the several academic authors.

So, some phylogenetic and chronological problems surfaced
in Formosa et al. 2019. Reason: all scientists accept without testing, sometimes, because it’s easier. It remains important not to perpetuate myths in science, starting here and now.

Figure 2. Subset of the LRT focusing on the Tritosauria. Note the separation of one specimen attributed to Macrocnemus.

Interesting phylogenetic note:
The clade Tanystropheidae is defined as the most recent common ancestor of Macrocnemus, Tanystropheus, Langobardisaurus Renesto, 1994, and all of its descendants (Dilkes 1998). In the LRT, that definition includes pterosaurs and their outgroups (Fig. 2). 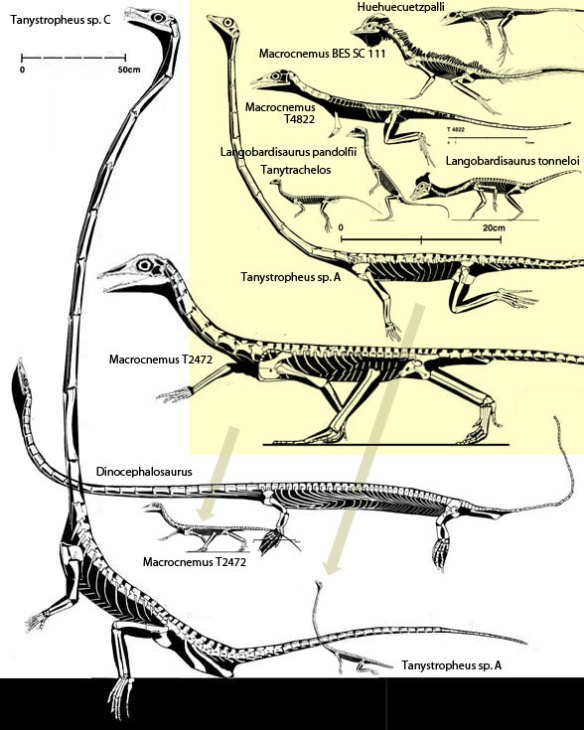 Figure 3. Tanystropheus and kin going back to Huehuecuetzpalli. Note the scale change from the white zone to the yellow zone with duplicated taxa.