Adding jawless fish
to the large reptile (LRT, 1611+ taxa) sheds new light on the origin of jaws and the basic topology at the base of the LRT.

Osteostraci,
like Hemicyclaspis (Fig. 1), have a ventral opening at the front of ventral surface of the skull, similar to their ancestors, like Birkenia, which retain lancelet-like cilia surrounding the oral opening. Perhaps Hemicyclaspis did, too. The oral cavity is poorly preserved.

Thelodus
(Fig. 1) was crushed to a thin film with a ventral exposure. Here the round lacrimal and angular oral opening is highlighted. The lateral armor (green) is barely ossified.

Sturgeons,
like Acipenser (Figs. 1, 2), have a longer rostrum and a posterior tube mouth. The maxilla and dentary are not yet present. Those bones grow teeth. Teeth are not present. Neither are the bones that grow them. So the lacrimal and surangular create the protrusible rim of that tube mouth and neither connects to the quadrate. Nesting sturgeons at the base of fish with teeth is the opposite of traditional cladogram topologies, in which sturgeons are considered ‘aberrant’ or ‘regressive’ (see below). 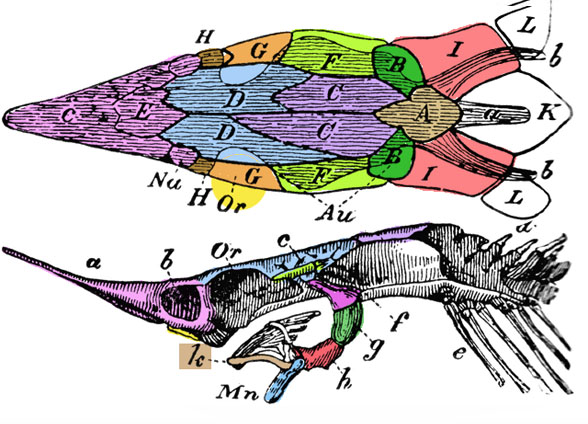 As you can see (Fig. 2), I am not the first worker
to determine that the traditional ‘maxilla’ on sturgeons is instead the lacrimal.

Sturgeons, continued.
Gill covers (operculum) appear. While feeding on the bottom with the mouth buried in sediment, water cannot enter the mouth. So instead water enters the top of the operculum and exits out the back for respiration.

Note the close correspondence
between the torso ossifications, fin placement, tail shape and skull shape on the sturgeon and its osteostracan ancestor, Hemicyclaspis (Fig. 1).

Figure 3. Chondrosteus animation (2 frames) in situ and reconstructed in lateral view. This is the transitional taxon linking sturgeons to bony fish + sharks.

Jollie 1980 reported in his growth study on sturgeons,
“It is a conclusion that the endocranium has been drastically altered in form and in the reduction of its ossifications but that the dermal head skeleton is basically that of an actinopterygian fish which shows many regressive tendencies such as the variable multiplication of ossified units. The jaws in this group are unique both in terms of suspension and in lacking a premaxilla. The post-temporal of the pectoral girdle has a unique relationship with the endocranium which involves the exclusion of the lateral extrascapular. An interclavicle is present. In spite of such features, the developmental story and adult ossifications of the sturgeon support the idea of a common, and understandable, bone pattern in actinopterygians and osteichthians.”

Jollie did not place Acipenser and Hemicyclaspis
in a phylogenetic context. In the LRT (subset Fig. 4) Pseudoscaphorhynchus is a tested sturgeon.

Figure 5. Subset of the LRT focusing on basal vertebrates. Note the clade Holocephali nests apart from Chondrenchelys and kin, including moray eels.

Are sturgeons bony fish?
Not according to the LRT. Much of their skeleton is cartilaginous and they nest basal to cartilaginous taxa. So between cilia and jaws, the transitional trait is a tube. Marginal teeth seem to have appeared three times by convergence in this scenario and once gained, were quickly lost in placoderms + catfish. Add to those palatal tooth carpets found in catfish, mantas and whale sharks.

Apologies for earlier errors.
As I’ve often said, I’m teaching myself vertebrate paleontology one taxon at a time using the LRT as a terrific tool for figuring things out.