Cover of Scientific American featuring article by Michael Habib. There are many things wrong with this image and Habib’s article.

Figure 1. Chase Stone illustration from pterosaur article demonstrating how helium-filled giant azhdarchids on a smaller planet took flight. Note now long it takes to perform the first downstroke. Figure 8 shows what would really happen in such a quad launch.

Habib begins with the widely agreed upon basics.
He reports, “Many possessed heads larger than their bodies, making them, in essence, flying jaws of death. No animal in the Mesozoic would have been safe from their gaze.” So, no exaggeration or hyperbole here. Just fulfilling the cover story headline.

“All that paleontologists know about pterosaurs comes from the fossil record. And that record has been frustratingly fragmentary, leaving us with just a glimmer of their former glory and a host of questions about their bizarre anatomy and ill fate.” Again, another wild statement without the glimmer of reality. We have a rather complete cladogram of pterosaurs with no gaping holes in the fossil record.

“One of the enduring mysteries of pterosaurs is how the largest members of this group became airborne.” Simple answer: they were flightless. Get used to it.

Habib confessess, “After all, it seems unfathomable that birds of such sizes could fly (although this would be puzzling given their many anatomical adaptations for flight).” Simple answer: Their smaller ancestors with relatively longer wings flew.

Figure 2. Pterosaur artwork from SciAm Habib article. Frames 2 and 3 show accurate skeletons. Note the clipped wings of Quetz. sp. comparee to wing proportions of similarly-sized ornithocheirid. The wings of the big Quez look large enough to fly. but not when compared to other pterosaurs.

Habib reports, “Membrane wings, such as those of pterosaurs and bats, produce more lift per unit speed and area than the feathered wings of birds. This additional lift improves slow-speed maneuvering capability, which for small animals helps with making tighter turns and for big animals facilitates takeoff and landing.”

Habib continues, “Flying animals do not flap their way into the air or use gravity to take off from an elevated location such as a cliff.” Judge this statement after remembering all the flapping birds and bats you’ve ever seen taking off. The first thing they both do is open up their wings (Fig. 3).

Figure 3. Click to play. Successful heretical bird-style Pteranodon wing launch in which the hind limbs produce far less initial thrust because the first downstroke of the already upraised wing provides the necessary thrust for takeoff in the manner of birds. This assumes a standing start and not a running start in the manner of lizards. Note three wing beats take place in the same space and time that only one wing beat takes place in the Habib/Molnar model.

Then Habib goes around the bend, “Many birds can manage impressive leaps. They are constrained by their heritage as theropod dinosaurs, however: like their theropod ancestors, all birds are bipedal, meaning they have only their hind limbs to use for jumping. Pterosaurs, in contrast, were quadrupedal on the ground. Their wings folded up and served as walking, and therefore jumping, limbs.” Therefore? How many animals leap with their folded wings or forelimbs? I have only seen a tiny grounded vampire bat (at 1.2 ounces) do this. But bats push large pulses of air down with their umbrella-like wings when they fly. Action = reaction, not high-pressure below vs. low pressure above, as in soaring birds and pterosaurs.

Figure 4. Anhanguera taking off in a plantigrade bipedal configuration according to Chatterjee and Templin 2003.Ridiculous.

It’s always fun to pull out
a bad study when trying to prove your point. Habib does this by recalling Chatterjee and Templin 2003 (Fig. 4)  in which “the animal could not weigh more than 165 pounds and had to run downhill into a headwind.”

Habib reports, “What really confuses scientists and enthusiasts alike is not the wings of pterosaurs but the heads. The skull on a rather typical Cretaceous pterosaur might be two or even three times the body length (usually taken as the distance between the shoulder and hip). Some had skulls surpassing four times the length of their bodies. In some species the neck is triple the length of the torso, with the head size triple again, such that the head and neck could make up more than 75 percent of the total length of the pterosaur. Why would any animal be so ridiculously proportioned? And how could such a body plan possibly work for a flying creature?”

Habib argues against flight in giant azhdarchids when he confesses, “…it is the disproportionate effect that the skull weight has on the animal’s center of gravity. A huge head, especially if mounted on a huge neck, moves the center of gravity quite far forward.” (Fig. 2). “For a typical walking animal, this creates a serious problem with gait: the forelimbs have to move into an awkward forward position for the animal to be balanced.” Not so. We see the same thing in living storks (Fig. 5). They stand upright with their center of balance always beneath the wing root.

Habib reports, “Imagine using crutches to walk while minimizing the weight on both legs—you would advance both crutches simultaneously and let them bear all your weight, then swing your legs forward between them, touch down and repeat.” Now imagine using all your power to use your arms and crutches to leap 10 feet into the air to unfold your giant wings. Try as you might, you can’t do it. Neither could pterosaurs, even if they maintained balance over their wing roots (Figs. 6, 7).

Habib reports, “During takeoff, incidentally, the legs would have pushed first, followed by the arms, for a perfect one-two push-off.”

Not often. Perhaps never. And in the real world would have been awkward and dangerous (Fig. 8).

Habib reports, “This arrangement would not have made for the most efficient walking gait, but it was doable. And anyway, pterosaurs traveled primarily by flying.” Don’t you hate it when scientists lump every sort of pterosaur into the same bad habits and niches? Clearly ctenochasmatids and azhdarchids had different habits than anurognathids. BTW, Habib never introduces us to the three known types of flightless pterosaur, including the plover-sized SoS 2428 in the azhdarchid lineage.

8. Unsuccessul Pteranodon wing launch based on Habib (2008) in which the initial propulsion was not enough to permit wing unfolding and the first downstroke.

Then Habib pulls his most famous ‘rabbit out of the hat’
by failing to show what happens the moment after the pterosaur quad launch (Fig. 9) while cheating contact between the fourth metacarpal and the substrate AND moving metacarpals 1-3 to the top of the metacarpal 4, instead of in front (medially) as in all other tetrapods and pterosaurs (Fig. 9).

Figure 9. Quad launch hypothesis from Habib’s SciAm article. He cheats the position of metacarpals 1-3 to the dorsal surface of metacarpal 4 and does not show what happens after the leap. Think how high this pterosaur has to jump to open up that ventrally oriented giant wing finger. Example in figure 8 above.

If you’re at all interested,
here (Fig. 10) is the real folding mechanism on the same genus of pterosaur manus. Note the placement of fingers and metacarpals 1-3. Habib’s hypothesis depends on a snapping of the wing, like a grasshopper’s leg, produced through contact between the wing finger tendon and the substrate, which is impossible given pterosaur anatomy and hand prints which only show fingers 1-3 making an impression with digit 3 often pointing posteriorly beneath the wing finger (Fig. 10). 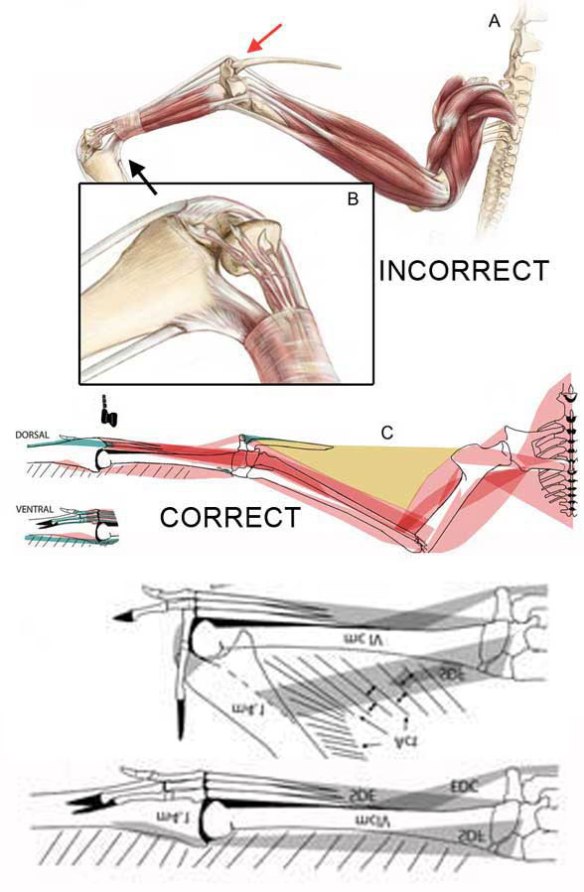 Figure 10. Above in color: Earlier image with shorter free fingers from Habib. Below: Tracing from bone photos for comparison.

Habib discusses the solution to the center-of-gravity (balance) issue
in giant azhdarchids by angling the wings somewhat forward to match it. Of course, this is not necessary if the giant azhdarchid is forever flightless. The continuing problem with Habib’s hypothesis that he keep ignoring is the FACT that the distal phalanges of giant azhdarchids are reduced to vestiges, effectively clipping the wings. He also cheats the anatomy (Figs. 9, 10) and never acknowledges that issue.

Habib concludes with the widely held hypothesis
that only large pterosaurs existed 65 million years ago, too large to survive the impact extinction. He does not compare Late Cretaceous pterosaurs to Late Jurassic tiny Solnhofen pterosaurs that survived that extinction event.