Hone, Habib and Therrien 2019
bring us news of several bones from several individuals of various sizes of a new mid-sized Canadian azhdarchid, Cryodrakon boreas (Fig. 1). Earlier today we looked at the promotional materials for this paper. Now, praise and criticism for the authors.

The authors uncritically cite Wellnhofer 1970 who,
“suggested that the cervical vertebrae of azhdarchids elongate during ontogeny (i.e., show positive allometry). If correct, this can make identification of positions of individual vertebrae, and comparisons between specimens and taxa, difficult when specimens are small.” 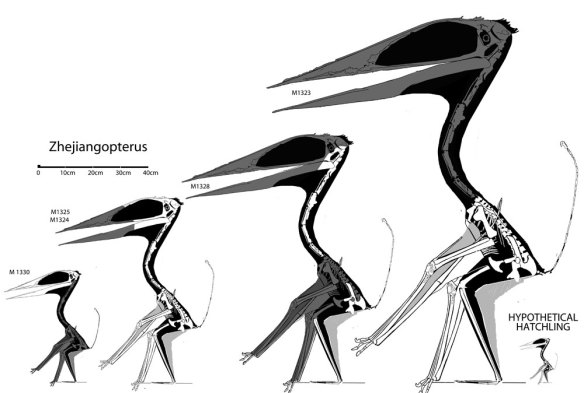 Figure 1. There are several specimens of Zhejiangopterus. The two pictured in figure 2 are the two smallest above at left. Also shown is a hypothetical hatchling, 1/8 the size of the largest specimen.

Unfortunately,
this reliance on citation shows the authors’ lack of understanding about pterosaur isometric (lepidosaur-like) growth patterns, proven by the several growth series demonstrated in the azhdarchid, Zhejiangopterus (which they cite, Fig. 1), Rhamphorhynchus (the subject of a rejected paper), and Pterodaustro (not to mention the several pterosaur embryos known).

Figure 2. The most complete Cryodrakon compared to the most complete Q. sp. Most elements are identical in size when scaled x.70 to match tibia lengths, but the cervical, metatarsal and humerus are relatively smaller in Cryodrakon.

Bone thickness
The authors report, “A break in the humerus of Quetzalcoatlus sp. (TMM 47180) reveals that cortical bone thickness [1.07mm] is near identical to that of Cryodrakon [1.1-1.3mm] (for which cortical bone thickness data were obtained by computed tomography [CT] imaging).” Note that the cortical thickness ratio (x 0.82) nearly matches the scale difference x 0.70). Fact: Large flightless azhdarchids are not evolving more solid bones, distinct from giant flightless birds.

Back to the humerus
The authors report, “Overall, the humeri of Cryodrakon and Quetzalcoatlus are quite similar, varying in most proportions within the range that would be expected for intraspecific comparisons.” The images of both (Fig. 2) do not support that statement. The authors conclude, “The greatest difference in overall shape is the slightly exaggerated flaring of the humerus distally in Quetzalcoatlus.”

You decide what the differences are.
The authors should have showed the two humeri side-by-side.

Flight
The authors report, “These similarities confirm that Cryodrakon and Quetzalcoatlus were likely of very similar size and build, and the two species likely shared similar flight performance characteristics and flight muscle fractions.” This assumes that azhdarchids of this size could fly, regardless of the vestigial distal wing phalanges (= clipped wings) that argue against that hypothesis in Q. sp. (Fig. 2; wingtip unknown in Cryodrakon).

Weight
The authors report, “Combined with the somewhat greater length of the humerus in Cryodrakon, it is likely that Cryodrakon was slightly heavier than Quetzalcoatlus but that their overall mass was likely similar.” Yes! True? But not so fast. Scaled to a similar tibia, pteroid and metacarpal length, the feet, neck and humerus were all smaller (Fig. 2). Then remember: to achieve that scale Cryodrakon was reduced to x 0.70 from its original size. So Cryodrakon had big legs, big hands, small feet (used as twin rudders in smaller taxa), a slender humerus… not really the traits you’re looking for in a volant pterosaur (by comparison, see Jidapterus below). Finally, weight is never the issue if you have plenty of thrust and lift. But those two factors are reduced in large azhdarchids, all of which had clipped wings (vestigial distal phalanges).

Cervical comparisons and bauplan
The authors report, “The cervical vertebrae of Cryodrakon are absolutely more robust than those of Quetzalcoatlus.” No. They are relatively smaller (Fig. 2). See for yourself.

It really does help to follow the scale bars,
placing the bones upon a good Bauplan (blueprint) to see how incompletely known taxa compare to more completely known taxa. This last graphic step is something the authors did not provide or experiment with. If they had done so, they would not come to such conclusions. The referees (Drs. Martill, Naish and Bever) could also have raised these issues or suggested graphic experiments (Fig. 2).

Cladistic analysis
The authors report, “The fragmentary nature of the material available, and possible ontogenetic trajectories, prevents us from conducting a cladistic analysis to determine the phylogenetic relationships of Cryodrakon boreas. Nevetheless, certain characteristics permit a preliminary assessment of the phylogenetic position of the taxon within Azhdarchidae. For example, it does lack distinct cervical zygapophyses for the middle cervicals, a trait that suggests that it does not lie within basal-most Azhdarchidae, but instead within the Jidapterus-Quetzalcoatlus clade.”

Since the authors brought up Jidapterus
it is worth our while to see for ourselves the relative size of its humerus and wing in this small azhdarchid (Figs. 3,4). Note the relatively larger humerus in Jidapterus. Only wing phalanx 4.4 is shorter here, with a folded wing that extends higher than the shoulder girdle, distinct from the much larger flightless azhdarchids.

Figure 4. Click to enlarge. Here’s the 6 foot 1 inch President of the USA alongside several azhdarchids and their predecessors. Most were knee high. The earliest examples were cuff high. The tallest was twice as tall as our President. This image replaces an earlier one in which a smaller specimen of Zhejiangopterus was used.

Jidapterus and Chaoyangopterus represent the transitional ‘end of the road’
for flying in azhdarchids. What follows (Fig. 4) are shorter distal wings and much larger flightless taxa.

Let’s put an end to the myth
that large azhdarchids were the largest flying animals of all time, a myth promoted by pterosaur paleontologists who should know better, but have staked their professional reputations on showmanship (rather than science).  We still have long-winged pteranodontids and ornithocheirids to compete with long-winged Pelagoris, among the largest bird aviators. That’s the Bauplan nature insists on if you’re a big flyer.