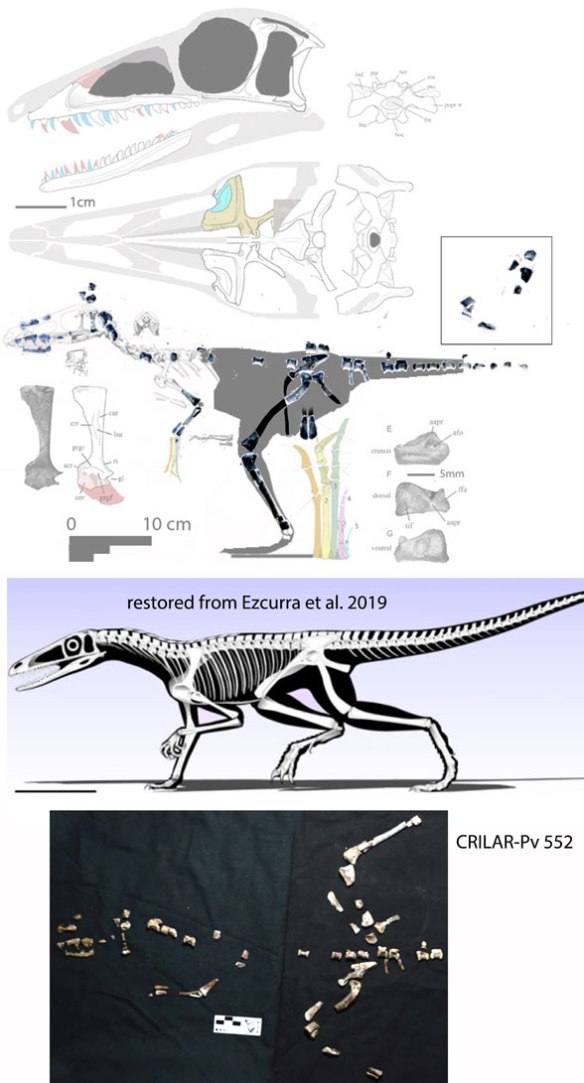 Figure 1. Combining anterior traits from Lewisuchus and limb traits from Pseudolagosuchus, CRILAR-Pv 552 appears to ally the two taxa. Here are two restorations. Ezcurra et al. prefer the quadrupedal pose. The LRT indicates Lewisuchus was bipedal based on limb size disparity. The ventral pubis reconstruction is based on LRT sister taxa. Their restoration bears little to no similarity to Silesaurus or its poposaur sisters.

From the abstract
“Here, we describe a new dinosauriform partial skeleton (CRILAR‐Pv 552) recently collected in the Chañares Formation that preserves previously unknown anatomical regions for the dinosaur precursors of this unit (e.g., premaxilla, inner ear, anterior zeugopodium) and allows comparisons with other dinosauriform specimens. CRILAR‐Pv 552 is referred to Lewisuchus admixtus because it possesses a proportionally large skull, a laterally projected, shelf‐like ridge on the jugal, and recurved, finely serrated middle‐posterior maxillary and dentary teeth ankylosed to the bone, and the absence of a coracoid foramen. The new specimen preserves a dorsally bowed dentary with a lateroventral shelf that is identical to a dentary associated with the holotype of Lewisuchus admixtus. Additionally, the morphology of the new specimen is completely congruent with that of specimens of Pseudolagosuchus major, bolstering the hypothesis that the latter species is a subjective junior synonym of Lewisuchus admixtus. A preliminary phylogenetic analysis with updated scorings for Lewisuchus admixtus found this species at the base of Silesauridae.”

By contrast
the large reptile tree (LRT, 1565 taxa) Lewisuchus nests within the Crocodylomorpha near the base where most taxa are small and bipedal, contra the authors’ restoration (Fig. 1). Everything in the new specimen seems to agree with the Lewisuchus restoration previously proposed other than a reduction in the ilium, closer to Crocodylomorpha than to the basalmost archosaur, the last common ancestor of dinos and crocs, PVL 4597. By contrast, another basal croc, Pseudhesperosuchus (Fig. 2), has a small ilium similar to that of CRILAR-Pv 552, and by homology Lewisuchus and Pseudolagosuchus. 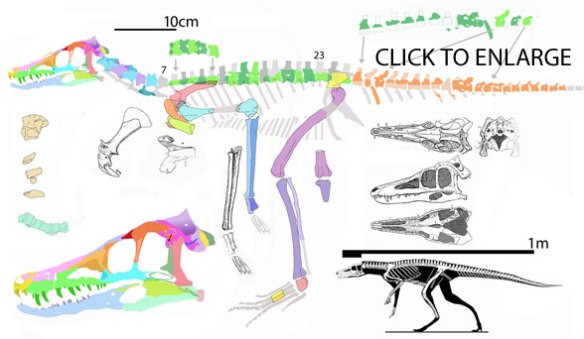 Figue 1. A new reconstruction of the basal bipedal croc, Pseudhesperosuchus based on fossil tracings. Some original drawings pepper this image. Note the interclavicle, missing in dinosaurs and the very small ilium, only wide enough for two sacrals. The posterior dorsals are deeper than the anterior ones.

Supplementary material
indicates, “Scorings of Lewisuchus admixtus changed from the data matrix of Baron et al. (2017), as modified by Langer et al. (2017) and Nesbitt et al. (in press).” 17 pre-dinosaur taxa are included among the 85 taxa. The rest are dinosaurs. Missing from the Ezcurra et al. taxon list (and all that it evolved from) are the following Lewisuchus sisters in the LRT: PVL 4597, Pseudhesperosuchus and Junggarsuchus. So taxon exclusion is a problem with Ezcurra et al.

Minor note:
As before, no trees were saved in the provided .nex file. Remember, fellow workers: Save those MPTs in a .nex file by using the ‘store tree‘ pull down menu item.