Updated August 19, 2019
after a reader’s comment that the lizard with the impressive gular sac (Fig. 3) was not Anolis but Sitana. Thank you for the correction.

Over the past few days
here, here and here, we’ve been dissecting, reducing and re-scoring the cladogram from Nesbitt et al. 2017, which disagreed in many respects from the large reptile tree (LRT, 1560 taxa) and used a completely different set of some 400 characters to do so.

Figure 1. Procompsognathus, Marasuchus and Segisaurus nest together in the Theropoda despite their many differences. Among these three, only Marasuchus is tested in Nesbitt et al. 2017.

Today we look at Marasuchus and kin,
which traditional topologies nest outside the Dinosauria and the LRT nests inside the Theropoda, between Tawa and Coelophysis in the broadest sense.

I note that Nesbitt et al. 2017
did not score any traits for the skull of Marasuchus, even though the maxilla and occiput are known. Some characters in Nesbitt et al. 2017 are ‘greater than‘ versus ‘less than‘ dichotomies. Of course this makes no allowance for ‘sub-equal to‘ or ‘similar to.‘ Better to state a character as a true dichotomy as in: “greater than“, vs. “not greater than.”

Many of the characters scored for Marasuchus
were centered around the cervicals, hind limb and ankle. Some scores, like the relative lengths of metatarsals 2 and 4, were easy to repair. Others took calipers and time. Not sure why, but many readily scored matrix boxes were left unscored. I gained the impression this cladogram was a little rushed-through. I hope the tree topology was not determined in advance in order that Nesbitt’s work would fall in line with the traditional pseudosuchian hypothesis based on ankle traits. Satisfying the expectations of one’s mentor/professor is something that can happen, as we’ve seen in one prior similar incident involving a newly minted PhD.

Neotony
It is worth noting how much smaller Marasuchus is compared to its LRT sisters (Fig. 1) and to basal theropods in general. This may be the reason why there is no deep groove between the distal condyles of the femur; why there are fewer and smaller processes on the hind limb elements, etc.. Even so… 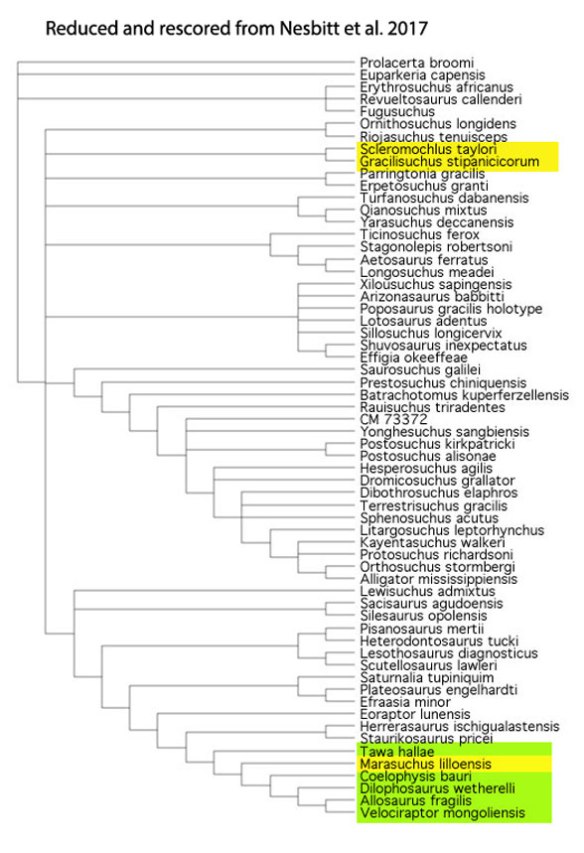 Figure 2. Midpoint cladogram reduced and rescored from Nesbitt et al. 2017. The higher number of MPTs happens when traits are rescored incompletely. Scleromochlus nested with Gracilisuchus a few days ago.

On a different subject—
The following photo (Fig. 3) was posted on Facebook. Here a typically quadrupedal agamid (genus: Sitana) is showing off the largest and most colorful gular sac I have ever seen… and it is about to go bipedal.

This is analogous
to what was happening in the Middle Triassic with lepidosaur pterosaur precursors like Cosesaurus, which were flashing and flapping their (probably colorful) fringed forelimbs while occasionally traveling bipedally (Rotodactylus tracks match its feet). Just a different way to impress the lady lepidosaurs.

References
Nesbitt SJ 2011. The early evolution of archosaurs: relationships and the origin of major clades. Bulletin of the American Museum of Natural History 352: 292 pp.
Nesbitt S et al. 2017. The anatomy of Teleocrater Rhadinus, an early avemetatarsalian from the lower portion of the Lifua Member of the Manda Beds (Middle Triassic). Journal of Vertebrate Paleontology 142-177. https://doi.org/10.1080/02724634.2017.1396539

2 thoughts on “Digging into another cladogram, pt. 4”