PBS produced a nearly two hour dive into
various ‘new’ paleo-insights featuring many of paleontology’s rising stars and taxa. They called it, “When whales walked: Journey in Deep Time.” The photography and special effects were excellent. Trailer here.

The first chapter (crocs)
starts in Madagascar caves where Voay, the so-called ‘horned’ crocodile fossils are found (Fig. 1). Dr. Evon Hekkala uses DNA to chart croc evolution. Today only it’s cousin, the Nile crocodile, still lives in Madagascar.  (Surprised that Dr. Chris Brochu (U of Iowa) was not interviewed, since he has done so much work with these crocs.) 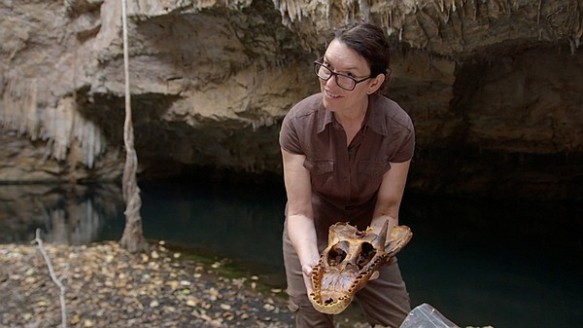 Chapter two (pre-crocs)
Dr. Bhart-Anjan Bhullar (Yale) takes us back to the Triassic, “in many ways the Age of Crocodiles”, as he assembles the bones of Poposaurus (Fig. 2). Preview here. Bhullar says, “These animals show us what crocodiles were like at the beginning of their evolution.” That’s close, but not true. Actually Poposaurus was basal to poposaurs and archosaurs (crocs + dinos), so it nests just outside of the croc clade. Junggarsuchus or Pseudhesperosuchus would have made his statement true, but he had Poposaurus in his cabinets at Yale. He also had another specimen, a real Triassic croc.

Figure 2. Revised skull reconstruction for the PEFO specimen. Here the anterior is considered a premaxilla. Those teeth are shaped like triangles, but they are very deeply rooted and exposed very little, which casts doubts on its hypercarnivory.

Continuing….
Bhullar next showed us a tiny ‘sphenosuchian’, nearly complete and nicknamed ‘little foot’ and cf. Dromicosuchus: YPM VP 57103). Originally it was discovered atop Popoposaurus.

Then Bhullar pulled a Larry Martin,
describing unique shared characters, rather than deciding what a croc is after phylogenetic analysis. We looked at YPM-VP-57103 earlier here.

Figure 4. YPM VP 057 103 reconstructed using color tracings from figures 1 and 2 in two scales. The smaller one shows the tail attached.

Chapter three (another croc)
Dr. Diego Pol (AMNH) presented a Jurassic notosuchid with a short snout and  large eyes on the side (not on the top). Pol discussed the variety of crocodylomorphs, but showed very few.

Chapter four (birds)
Dr. Julia Clarke (U of Texas) discussed birds and mentioned, “They can dive so deep into waters that light cannot reach.” Hmmm. Never heard that before. Clarke repeated the tradition based on genomic studies that half the total number of birds are passerines (song birds). By contrast, in the LRT sparrows (genus: Passer) give rise only to hoatzins, parrots and moas.

The PBS narrator noted that birds evolved from dinosaurs, then asked the silly question, “How could something so huge and heavy evolve into something so light?” According to the LRT, dinosaur taxa in the bird lineage were never huge, never heavy. Rather many basal small taxa gave rise to larger taxa—including moas and elephant birds, which are huge and heavy birds, as everyone knows. I just pulled a Larry Martin.

Chapter five (more birds)
Dr. Jacques Gauthier (Yale) said “Deinonychus altered everything we know about dinosaurs and birds” and that’s one of the major embarrassments according to Dr. John Ostrom, Gauthier’s mentor.  Gauthier mentions the first feathers were for warmth. Actually that was secondary. Warmth only happens when lots of feathers spread into a thick coat around the body. Gauthier describes the flight stroke of birds as they lift their forelimbs over the back, which is “very weird for tetrapods.” Gauthier makes no mention of Ken Dial‘s work or the elongation and locking down of the coracoids that enable a flight stroke in pterosaurs and birds.

Chapter six (more birds)
Dr. Jingmai O’Connor (USC, IVPP) describes dinosaurs buried in volcanic ash. Specimens document every stage of the dino–bird transition as they once lived side-by-side. She shows and discusses Caudipteryx, Jeholornis and Confuciusornis. O’Connor said an abbreviated tail evolved many times in dinosaurs and birds. You heard that here first, following a paper on pygostyles by O’Connor.

Chapter seven (more birds)
Dr. Erich Jarvis (The Rockefeller U) studies bird brains, learned behavior, and bird song evolution. The PBS narrator asks, “We all want to know is the bird family tree correct?” Jarvis says, he trusts genes to infer relatedness, and “most people trust DNA.” The LRT shows that “most people” are wrong. Jarvis thinks that “just a handful survived the (Cretaceous) mass extinction: shorebirds. ducks, geese, ostriches, emus.” This quietly omits one of the most highly derived bird clades, penguins in the Paleocene.

Chapter eight (whales)
Dr. Mark Uhen (George Mason U) mentioned that Charles Darwin suggested something like a bear could become a mysticete, then described a history of fossil whale discovery beginning with Basilosaurus, first thought to be a giant sea serpent.

Dr. Philip Gingerich (U Michigan) was highlighted for his discoveries in 1975, but even he made the mistake of assuming whale monophyly and descent from artiodactyls (a primitive deer). The LRT recovers at least two origins for extant whales where tenrecs nest basal to odontocetes and desmostylians nest basal to mysticetes. Gingerich discovered Pakicetus in Pakistan, which was once close to Madagascar, where tenrecs are found today.

Figure 5. At the Museum of Natural History in Paris, Dr. Christian De Muizon shows off the complete reconstruction of the Pakicetus skeleton, surprisingly an ancient relative of modern day whales.

Chapter nine (more whales)
Dr. Christian De Muizon (Muséum National d’Histoire Naturelle, Paris, Fig. 5) shows off a complete skeleton of Pakicetus, saying, “It looks like a dog with a long snout and webbed feet,” ignoring the fact that it looks more like a big tenrec and tenrecs echolocate.

Dr. Carlos Peredo (George Mason U) says baleen whales and toothed whales had their split early within cetacea (30 mya), in the descendants of Dorudon. By contrast, in the LRT the odontocete/mysticete split was much earlier, in the Jurassic. when tree shrews diversified.

Chapter ten (elephants)
Something about elephant tracks and extinction. Interesting to watch, but not much to comment about.